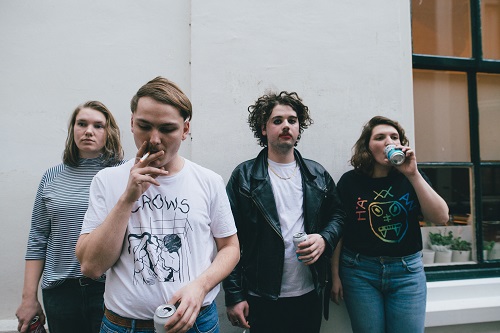 An unholy punk teen noise coming out of Eindhoven, Charlie and the Lesbians release their new EP, The Lost Boy today. The band are known in the Netherlands for their unhinged live shows, ones that usually end up in a free-for-all of broken guitars, mic stands, sweat and the simultaneous explosion of a thousand spots. As to the name, it’s just a reflection of their practical, factual Dutch nature as Charlie sings whilst his sister and her girlfriend help make a massive racket. One that isn’t too far from the loser-punk Speed Glue and Shinki made (albeit a wee bit faster, ahem) or every provincial teen thrash band that has walked this earth. The lyrics are basic and direct as they come; Leave Me Be is as simple a call-out to being left alone as you can wish (you don’t really need me to tell you what the lyrics are, now do you) whilst Fuck You Up also leaves little to the imagination.

They are much more than a jokey teen bratsqueal mind; as they have that indefinable, catchy “something” in their music that makes you come back for more. They have a form of writing great songs too, as seen by “older” tracks such as Hating My Life and Reefer Madness. And, as said earlier,  as a live act they scream the house down. Here’s the video from EP number, Lucifer, just as an added giveaway.