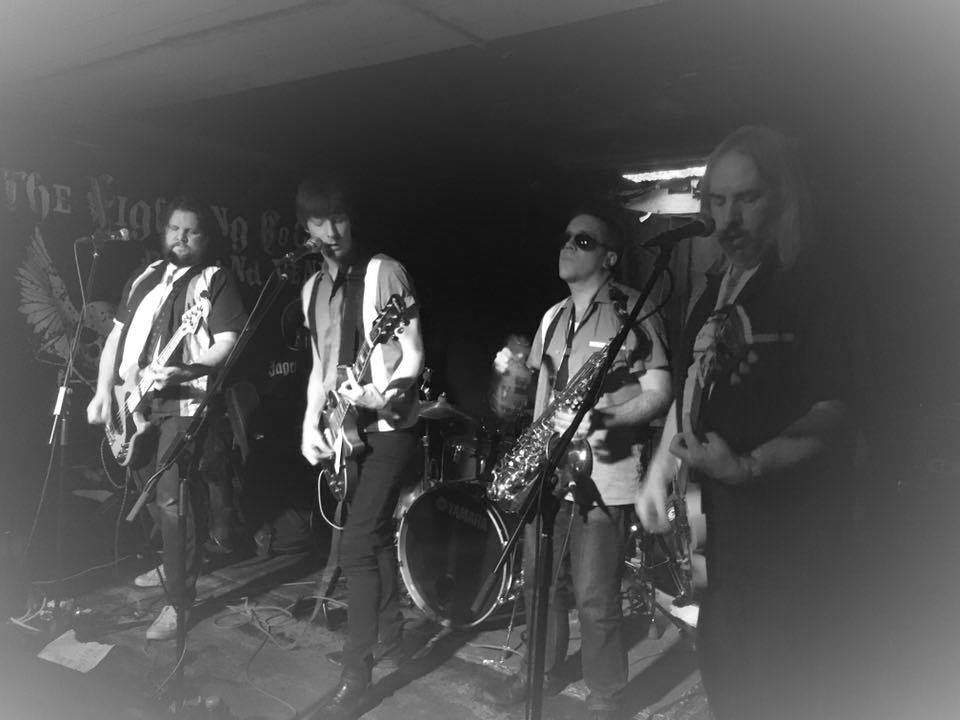 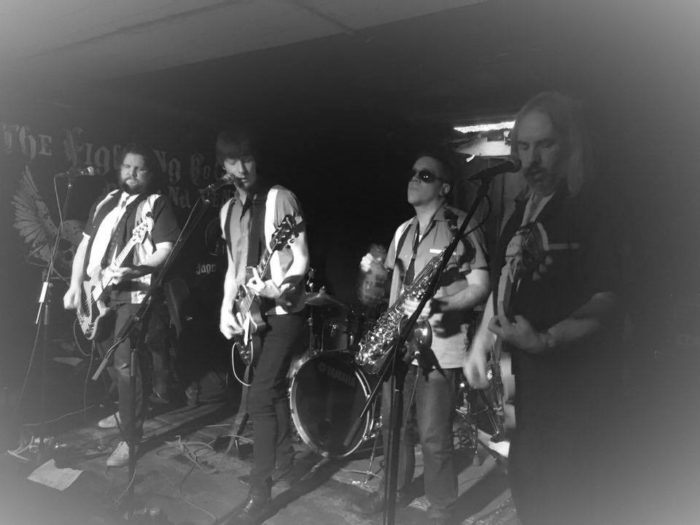 “Literary men have often dwelt on the idea of bands. The country was said to have been infested with them. You then imagine rough bandits united by a will to plunder, by cruelty and hatred. The binding element of these bands was greed, but a greed camouflaged by anger, by the demand for justice.” – Jean Genet

These words from Genet’s autobiographical ‘Thief’s Journal’ are in the back of the mind as we journey to Catford, South London, to meet garage rock legends The Charlemagnes. The band members present, it transpires, were unaware of the origins of the title ‘Hot For Crime’ – still one of their best known songs although elusive in original 7″ format – in the same aforementioned book; not a band that can be accused of cashing in on their own biography, The Charlemagnes have only recently announced an online presence and confirmed an impending release for what will be – incredibly – their debut album, ‘Three Chords and a Half-Truth,’ a mere five decades after the group originally emerged from the New Jersey garage rock heartland.

Although the band’s proto-punk roots show through on tracks like ‘Hey Look At You’ and ‘Sugar On My Cereal’, the record proves to have a broad scope including more reflective tracks like ‘Teardrop Stop’ and ‘Barbed Wire and Axle Grease’ – all emotive vocals and blistering sax/guitar interplay – as well as mid-paced rockers, a touch of glam rock camp and even a full-blown ballad.

We met with Marty, Louis and Lester from the band to get the highlights and the lowdown on the world of The Charlemagnes.

LTW: Hello again, The Charlemagnes. Tell us about your new record, ‘Three Chords and a Half-Truth’.

Marty: It’s raw, loud and mostly live. Like the band.

LTW: The album has been some time in the making. The obvious question is: where have you been, and why has it taken so long?

Louis: Any group can tell you, you need the right ingredients for the mix. The catalyst for the reaction. Brent was hanging around after his last band went on hiatus and we had Benny come in on saxophone and bam, you got a working band again.

Marty: Any group is half marriage, half psychodrama, half deterrence theory.

LTW: Is now the right time for a band like The Charlemagnes?

Louis: You mean fashion, like trending? We’re doing us. Let the chips fall.

Louis: Seems like every other person you meet is in a group. But it goes one of two ways: the music is either too complicated or it’s too pleasing. It sounds worried what people are gonna think. Music should hit you in the gut.

Marty: Which is not the same as being dumb.

Louis: The time is right. And we’re hooking up with bands on a similar tip, keeping it raw for the people. Hip Priests, Dealing With Damage, Eight Rounds Rapid. Younger groups, but wiser than their years.

Marty: Eight Rounds Rapid are off the hook. Authentic. Kind of feral, like Dickensian.

Les: They’re from some border town on the estuary, out by a place called Canvey Island. It’s like Coney Island crossed with a penal colony. 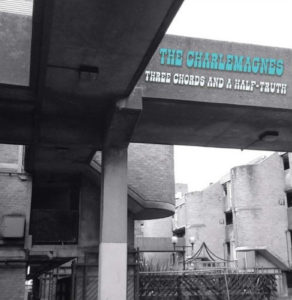 LTW: The Charlemagnes aren’t the first older group to get rediscovered and play again for a new audience, but you are unusual in being a stateside band that ended up based in England. An alternate title for the album could be ‘From South Jersey to South London’?

Louis: Yeah, the LP cover is a nod to that.

Marty: We’re a south type of band. Johnny and I were from South Brunswick. We lived in the south Bronx for a time. Most of us live around south London now and we recorded the album at a studio called Marketstall, in South Bermondsey.

LTW: Your nephew performs at more of the gigs now?

Marty: He steps in a lot of the time. He knows the songs. Still kinda awkward onstage, but his hand-eye co-ordination is coming on. No-one expects the exact line up from 1776 for chrissake. The Charlemagnes is an evolving thing, we’ve adapted.

LTW: I thought I read somewhere Marty Jr is your son?

Marty: I don’t wanna get into it. Let’s just say I know the family.

LTW: So is the album a final statement from The Charlemagnes, a full stop?

Louis: No ‘cause we ain’t no heritage act. Some of the songs are old, some recent. It’s different to the bootlegs too because a few of the lyrics are updated.

Les: There’s old and new material we haven’t even recorded yet.

Marty: It’s more like a new start. This is just a set of songs that fit together.

LTW: Johnny is still involved in the band as writer, a sort of non-public facing role?

Marty: Not facing the public is a motivator, I think. It’s not unprecedented. He gets claustrophobic in the projects, but there’s also a safety element. I say projects, in Catford we call it an estate.

Louis: The eighties were hard for bands like us, but the internet changed things. Back in the day, if you went kinda, er, reclusive.

Louis: Right. It was all over. But now every shut-in has wi-fi. Even if they put you in solitary, you can get a drone to fly you in an iPad and start a blog.

Marty: Johnny says he won’t perform again, but then he says all kinds of stuff. “I’ve written a book”, he says. “I’ve got a play on in Edinburgh”. All kinds of things.

LTW: These are very political times. Are you worried that the message in some of the old songs is a bit pre-woke? ‘That Girl is a Mess,’ for example.

Marty: We were proto-woke. Listen to ‘No Payday’, we always took sides. Now those were political times. Like, back when Buddy [Carsten, former bassist] was in the band, he wanted to do something for Vietnam, third world liberation, you know we all did. Take out a few ROTC buildings. But he could never find the Weather people and I can’t say too much here but there were pretty strong rumours he ran some errands for the FALN. And he wasn’t Nuyorican, we were all white kids. But we were always in touch with that stuff.

Louis: It’s funny you should mention that song ‘cause we used to sing ‘That Boy is a Mess’ to try and balance it up but we ended up going back to ‘That Girl’ in case it sounded, ah, homophobic to anyone or something. But you can overthink things, it’s not a message song.

Marty: Politically, you got to remember Johnny is Irish, my roots are part Italian. You can cherrypick history or remember that we were all fresh off the boat once. That’s a choice. The Trumps choose to forget.

LTW: Tell us more about the songs. A surprising proportion of the lyrics seem to be love songs, such as ‘Look Back Heart Attack’ and [album closer] ‘Barbed Wire and Axle Grease’.

Louis: Well that one’s tricky. Johnny watches a lot of movies. Maybe there was something with bikers, or the first world war.
Les: Could be a metaphor. Wait, do we have those?
Marty:  He did go through a phase of comparing his moods to battles, but writers are like that.
Les: A whole bunch of people died in that war, but a heap of art came out of it. So it’s how you say, swings and roundabouts.

Louis: Love songs are a coded language too. You got your pulp romance and then you got your repressed cri de coeur of the people.

Marty: We hesitated about ’Look Back, Heart Attack’. It’s a lament, it’s stripped back, it’s very different sound. But it felt right, and Grace’s trumpet is for the angels.

LTW: What’s next for The Charlemagnes?
Marty: We’re launching the album in London and Newport. With this kid Jon Langford who’s in a bunch of bands.

Louis: Funnily enough, he’s from here but he lives over there. But we’re all global citizens now.

Les: The album is on heavyweight vinyl.

Louis: Yeah we should say that it’s a great looking album. There’s an inner sleeve with the lyrics, liner notes, photos.

Louis: We’re putting CDs in with the records too.

Marty: Then we’ll be going back in the studio. There’s a hot mess of material to get down on tape. Time don’t sleep, but increasingly neither do we.