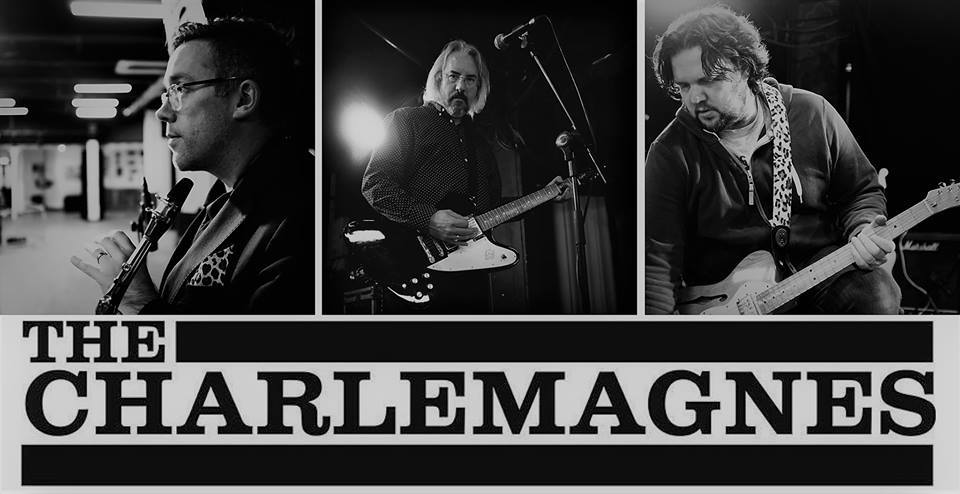 Louder Than War’s Cassie Fox sits down for a chat with legendary band The Charlemagnes as they piece together their long-lost album from the debris of their past.

It’s a wet April weekend and I’m making my way under breezeblock-grey skies to deepest south London to meet The Charlemagnes. My destination: The Tiger’s Head, Catford. This transpires to be some sort of test because, when I finally find the location, in the Bellingham/Southend district, the pub has gone – replaced by expensive-looking new flats. With no time to ponder the significance of this, I receive a call directing me to a nearby chicken shop: inside sit three baseball-capped members of the legendary band, hunched together in a booth, nursing fried lunch and Diet Cokes.

Their first rhythm section disappeared to Canada to dodge the draft. Their second line-up disintegrated in a swirl of personal and musical differences. Their third incarnation fell from the bottom rung of the New York pre-punk ladder and fell apart: ’70s casualties and rock n roll collateral damage. Garage survivors The Charlemagnes are only now piecing together their long-lost album from the debris of their past. What follows is a transcript of our exclusive interview with the group. Chewing the fat: Marty (guitar), Louis (bass) and Les (drums).

Louder Than War: Welcome back! Where have you been?

Does Catford seem a long way from New York?

Les: You’ve seen one broadway, you’ve seen them all.

But Marty, you and Johnny were from New Jersey originally?

How do you find London?

Marty: I made a life here a long time ago. You adapt.

Les: The advantage of living in between all these chicken places is you can practice voodoo without anyone getting suspicious about the bones under your window. I’m kidding.

Johnny’s still involved with the band?

Les: He’s what you might call a silent partner at this point.

Marty: No. See we talked about this. That’s toxic language. Fatphobic.

Marty: We’re not about that. We’re cool.

But Johnny still writes for the band?

You had some censorship problems back in the day from labels, regarding some of his lyrics?

Marty: You gotta understand, times were different. It’s the garage boom. All the labels want their own band, but still they have these real conservative attitudes.

Marty: Johnny liked to write about girls, but nothing worse than anyone. It was one part misunderstanding, nine parts overreaction.

Les: Anyway, we changed most of that stuff around. We don’t put that out now. You can always be schooled.

Louis: We love women. My mother was a woman.

So this is a new look Charlemagnes?

Marty: There’s a couple new faces. Les and Louis have been with us from time, but we’re working with a new kid called Benny on saxophone, who can really blow. And a brother called Brent is backing us on guitar. His name was actually Benny too but we had to change that, you can’t have two Bennies in a band. 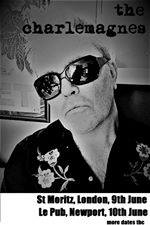 Do fans accept line-up changes as inevitable? The Charlemagnes were out of action for some time.

Marty: Everyone knows the back story. The ’80s were hard. For me personally, I mean. I couldn’t tell you how it was for anyone else.

Les: You lose people. Not all life and death stuff. That too, but sometimes you just literally lose people.

Marty: My son Marty Jr steps in sometimes. There’s a kid called Matt we’re going to try out for live shows. And Grace, she’s doing some trumpet for the album. It’s a solid but also fluid line up.

Les: And gassy if you count Johnny.

Marty: If it’s Johnny’s words and some kid on flugelhorn it’s still The Charlemagnes.

On a brighter note, you’ve got record release news?

Les: Yes. We are talking to a couple of labels about an EP. But there might be a reissue of ‘Hot for Crime’ in the works too so watch for that.

Louis: Then the album. There’s enough songs and most are ready, for the album as well as EP and maybe a couple other things. We’re online now too.

So I have to ask you about Trump.

Marty: Sick of talking about [muffled]

Marty: Before you get too cosy over here, remember everyone has a Trump. If you don’t, it’s coming from us to you real soon.

Les: What was that thing Burroughs said?

Marty: Frankie? From the block?

Les: Not Frankie Burroughs. Kind of trust fund junkie writer. Said America is evil, the evil was there from the beginning.

Marty: At the same time, fuck you. We love it. It’s a garbage dump, but it’s our garbage dump.

Tell us about the songs. No Pay Day addresses the situation back home at the moment?

Marty: Well, see yes and no. Some of us [have] seen presidents come and go. The working man gets screwed whichever way.

Marty: No Pay Day is still on point so we play it. Other songs are better left in the dust.

Louis: Some of what we do is more tongue in cheek. Like, what Johnny likes to eat. Or personal stuff.

Les: Shizz about growing up. Being kids. People we knew.

Like Hot For Crime? Do you think audiences accept that sort of lifestyle now?

Les: You’re right, things are a lot more straight. But if anything that makes those glimpses more appealing.

How did you end up better known in the UK for that record?

Les: Collector scenes, man. It was the tail end of the glam pub rock thing. Or it might have been the beginning of that. But they were interested in our sound.

Messed Up seems like an ambiguous song as well. It’s clearly about a dependant relationship, but it’s almost an attack as well as a tribute.

Marty: ‘Honey’s Mussed Up’, right. Relationships are hard to keep together, just like bands. I don’t wanna speak for Johnny but it’s hard when you’re the artist.

Les: You can find yourself not the main breadwinner of the household, shall we say.

There seems to be a kind of elegy-like quality in some of your music along with the energy. Is that deliberate, and does that reflect your experiences?

Louis: It’s not a pity party. We just play it how it is.

Marty: Everything goes back to the blues. We haven’t stolen the blues by the way, but we might borrow it from time to time.

Les: We’re back from the crossroads. With a tale to tell.

Marty: Nothing more to be said.

The Charlemagnes begin a mini-tour with Eight Rounds Rapid at St Moritz, London, on 9 June, followed by Le Pub, Newport, on 10 June.

Find the band online on Facebook and on Soundcloud.