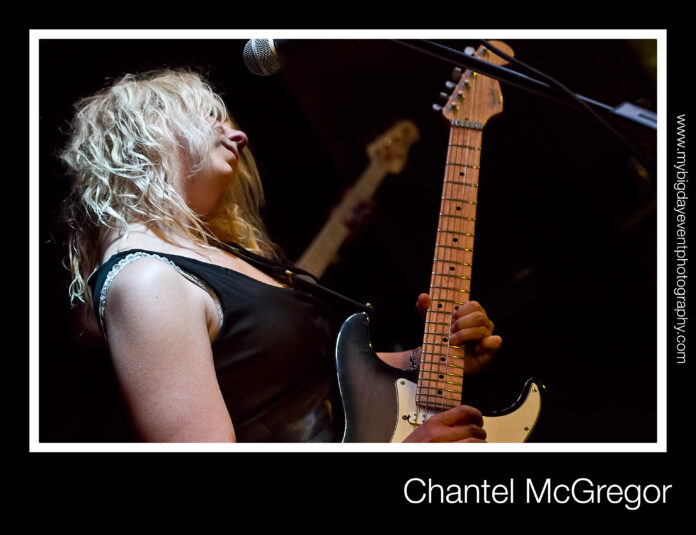 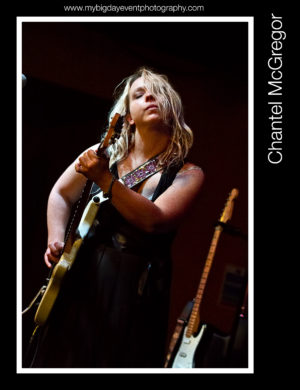 She’s only in her mid twenties but Chantel McGregor is firmly established as one of the UK’s premier rock and blues guitarists. She’s been voted Best Young Artist and Best Female Vocalist at the British Blues Awards and in 2013 and 2014 she was Guitarist Of The Year. She’s jammed with the great Joe Bonamassa, worked with Marillion, produced a fine blues album and has another on the way, is an accomplished songwriter, and has managed to do it all without appearing to have taken on any of the showbiz fakery and arrogance that some musicians acquire early on in their careers.

Before the show she’s out mixing with the crowd and setting up the stage, and I mistake her for a crew member and ask her about the photo set up. It’s not the done thing, badgering the artist about stuff like that and when I realise my mistake I’m pretty embarrassed but she doesn’t seem to mind. A couple of minutes later she drifts to the stage, barefoot in a long black dress, a million miles from the look of your usual rock goddess look and with no leather or leopard print in sight, picks up her white Fender Strat (“the noisy rock guitar”) from the rack and after a brief introduction lets rip with Southern Belle. It’s one of her newer songs, a powerful piece of rock blues and she follows it with No Control before dipping into her back catalogue with Like No Other, Caught Out and Screams Everlasting.

The pattern is set for the evening – a mix of her familiar material from her 2011 album Like No Other plus newer songs that I’ve certainly not heard before, many of which suggest that she has been spending some quality time with somebody’s old prog collection. There’s plenty of variety in the set which ranges from seriously heavy blues to numbers which are poppy and folky, especially Anaesthetise, played in a drooped D tuning so that the bass reverberates around the room like a physical thing, and a very sweet solo acoustic tribute to Jeff Buckley who is her favourite person ever in the whole world. 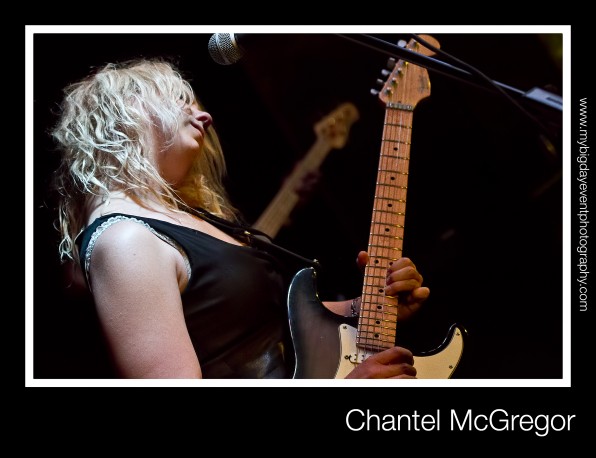 McGregor’s guitar virtuosity is no surprise of course, although this is the first time I’ve seen her live and her playing is a lot gutsier and dirtier than I’d expected, but it’s her singing which is a revelation. She has a remarkable range of styles and every so often will deliver a line or two in a rising, ingenuous tone that reminds me of early Kate Bush, maybe Lionheart era. Which is of course bang on trend.

She also has an easy and engaging stage presence, and bassist Richard Ritchie and drummer Keith McPartling provide her with impeccable support, never intruding on her musical space but not afraid to let rip with a little mayhem themselves when the situation permits. They are clearly all enjoying themselves and there seems to be a competition going to see who can make the other two giggle first – during McGregor’s extended solos they are smiling and making eye contact constantly which is probably essential when you’re improvising in public. I’m never sure with this kind of playing how much is improvised and how much is carefully planned but McGregor herself comments on the length of Daydream (see below) so clearly there is a degree of flexibility in the performance. From our point of view it’s just nice to see musicians enjoying themselves and feeling confident enough in each other to go where the music leads for a little while.

The centrepiece of the show is a cover of Robin Trower’s Daydream, which also appears on the Like No Other album. It’s the only cover of the night but that doesn’t mean that it’s a filler. The album cut is a nice thing, thirteen minutes of controlled elegance, but the album cut is no preparation for the wild physicality of the live version.

Starting out jazz tinged and folky, it builds by stages into a sensational display of virtuoso guitar work, huge ringing motifs and the notes falling from the guitar so fast and liquid that it’s almost too complex to comprehend. There’s no use trying to follow the changing moods and rhythms, all you can do is be in the moment with the guitar as it sometimes screams as it writhes and twists above the bass and crashing drums, and sometimes drops below them in a deep and turbulent arpeggio, then soars again, rising on the vector of an eight note riff of sublime simplicity.

The velocity and volume build and build and when she pauses it’s as though time itself has stopped and we’re left at the still point of the turning world straining to make out faint echoes in the crowded room, like a Ballard sound sweep.

It’s no good me trying to guess how long the piece lasts, twenty minutes, maybe more, maybe less, but it could have gone on all night and nobody would have complained. At the end of the song when she comes to the microphone to introduce the next she’s tongue tied, almost a little shell shocked, from the sheer intensity of the playing but a couple of good little rockers sort that out and from then on the pace never slackens to the end of the show which is brought up by prog epic Walk On Land.

The crowd roar their approval, Chantel McGregor looks really pleased, I shall be looking out for the new album when it arrives and if you like to hear somebody play a musical instrument so well it’s a little bit mind blowing then you should too.