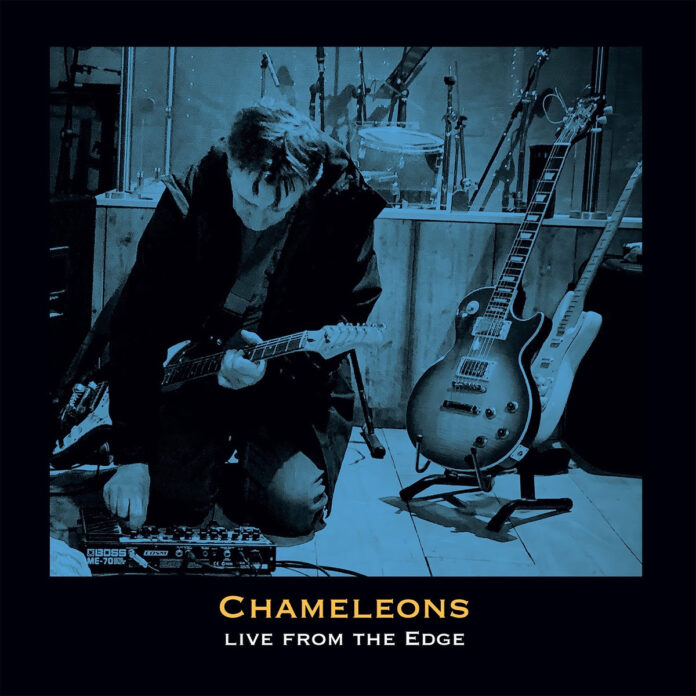 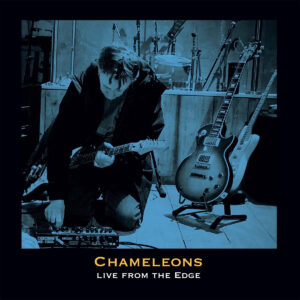 (Live From The Edge)

Mark Burgess and Reg Smithies have been back in the studio to record a set of classic songs from Chameleons astonishing back catalogue of influential tunes that stand the test of time. Wayne AF Carey dives into the sonic cathedral like Tom Daley on a gold medal hunt…

Chameleons to me have never really been away from the music scene. Mark Burgess has kept the torch alive, touring hard and pulling in the crowds as always. Some may say it’s a nostalgia trip, however I’ll argue with anyone that Burgess was born to perform and the few times that the band split must have hurt real hard. I won’t go into all the details as, if you’re a Chameleons fan you’ll know the script (probably from a bridge). Chameleons were a four piece that had the dynamics to become one of the greatest bands in the world and there will be purists out there that argue, without Lever and Fielding they aren’t the Chameleons. I say bollocks. If you’ve seen them live recently and if you listen to these fresh recordings you might just have to bite the bullet and agree they are as great as ever and still shine. For those who have not had the pleasure of this fantastic band here’s a bit of a history lesson…

Long cited as a hugely influential act, having inspired the likes of (The) Verve, Oasis, Interpol, The Killers and Editors, the group was formed in Manchester in 1981 and comprised vocalist/bassist Mark Burgess, guitarists Reg Smithies and Dave Fielding, plus drummer John Lever. They released three classic albums – ‘Script of the Bridge’ (1983), ‘What Does Anything Mean? Basically?’ (1985) and ‘Strange Times’ (1986) – before breaking up.

More than a decade passed as each member of the group worked on separate musical projects, until the dawning of the new millennium finally saw the quartet reunite for a set of successful UK shows in May 2000 that were followed by dates in mainland Europe and the US. The acoustic album ‘Strip’ was released to coincide with these, while a fourth studio album entitled ‘Why Call It Anything?’ was issued the following year that The Encyclopedia of Popular Music stated was “a stunning reaffirmation of the brilliance of this unsung band.”

2002 saw the release of ‘This Never Ending Now’, another acoustic rendering of songs from their back catalogue, with an additional cover of David Bowie’s ‘Moonage Daydream’, before they once again disbanded in 2003.

Burgess eventually reunited with Lever as ChameleonsVox, performing and touring Chameleons material in the UK, mainland Europe and the US between 2009-2014 and releasing one EP just prior to Lever’s departure at the end of 2013. Lever died in 2017. Another line-up centred around Burgess (accompanied by Yves Altana, Neil Dwerryhouse and Chris Oliver) saw him tour more regularly than at any point in his career prior to the pandemic, including shows in Australia and China as well as regular strongholds such as the UK, mainland Europe and North America.

Chameleons have now joined forces with Metropolis Records to release ‘Edge Sessions (Live From The Edge)’, a collection of seven classic Chameleons songs performed live in May 2021 by founding group members Burgess and Smithies, plus Chris Oliver (guitar) and Stephen Rice (drums). Three additional bonus tracks of ChameleonsVox era live recordings round out this stunning release.

And stunning it is. The opening track A Person Isn’t Safe Anywhere These Days just oozes with layers of sublime haunting guitar licks and it sounds so fresh, with Burgess as ever worldly wise, that voice of a haunting eighties generation worming it’s way through into our ears as effective as ever to capture a whole new audience. Return Of The Roughnecks was and still is a stone cold anthem, that nagging bass line and the echoing jangling guitars backed by a pummeling drum beat. The opening to Up The Down Escalator gets me every time. The essential Chameleons tune for any new fans out there. Anthemic, huge and up there as a true classic. The song that always stuns me as to why they aren’t massive. It’s fuckin’ criminal. It actually sounds better than the original recording here.

Anyone Alive is the epitomy of ‘shivers up ya spine’ stuff. Chiming guitars, beautiful bass and vocals from a master of the art, backed by an accomplished tour de force of Stephen Rice and Chris Oliver who deliver the goods as much as Fielding and Lever could. Soul In Isolation is a whopping 9 minutes 55 secs of pure quality. People have described Chameleons as a sonic cathedral many times and this tune wipes away any doubts to whoever coined that one. This is the song The Horrors probably dissected and put back together again to create their later sound. Nods to The Doors on this one from the clever twistings of Burgess who manages to meld a bit of Eleanor Rigby – The Beatles in there. It’s impressive as fuck and he’s that clever you don’t know whether he’s taking the piss. A proper nod to his influences and a unique way of tainting his own beautiful songs with a touch of his influences thrown in. “This music was made in Manchester, England” proclaims Mark on the opening to Singing Rule Britannia (As The Walls Close In) which reworked, shits all over anything Weller is doing at the moment. “Tick tick bang” Fuckin’ right. A bit of Clash – White Riot thrown in, a Joy Division tribute with a bit of Transmission in the mix to make a strange medley at the climax.

Second Skin is as cracking as ever. The shimmering backdrop of echoing guitars and stirring drums all keeping in time with Burgess dropping that deep bass into the mix. Another nine minutes of planned out jamming that sounds magic and mesmerising with that amazing guitar chug throughout. “If this is the stuff dreams are made of, no wonder I feel like I’m floating on air” Just listen to this and you’ll know what I’m ranting on about.

Bonus tracks Sycophants, Heaven and Ever After give you a taste of post Chameleons with a one two three from Burgess, laying down the sound he created with this national treasure of a band, who by rights should be as big as The Bunnymen (due to the scope in both bands sounds) and if the general census of music fans nowadays goes there’s still time. I’ve seen a lot of live music recently and Chameleons are probably up there as a spiritual experience with the likes of bands like Killing Joke and Spiritualized if you’re looking for some enlightenment. The greatest band to ever come out of Middleton, Manchester.