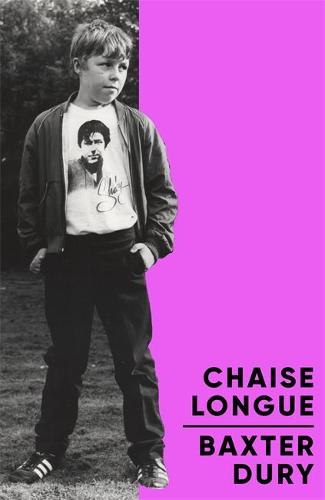 I’m sure we’ve all dreamt at some time of being a rock star progeny. Living a mega cool life free of rules and all the boring stuff most kids have to endure like going to school. I first came across Baxter Dury’s unconventional upbringing in Zoe Howe’s excellent book ‘How’s Your Dad? Living in the Shadow of a Rock Star Parent’ (2010). Even in that context of scrambled childhoods, Baxter’s years of tutelage with one of his Dad’s demi-monde mates stood out. And now we have the story from the man himself, and it makes for a fascinating and thought-provoking read.

I’m a huge fan of Baxter Dury’s music, but the narrative here is solely concerned with his pre-musical life. One of my very few gripes here is that the book doesn’t follow a straight timeline, so with chapters hopping from year to year I found myself doing quite a lot of flicking back and forth to work out who/where/when sometimes. But maybe I’m wanting things too easy – it certainly can’t have felt like an easy progression at the time.

The story is set against a mostly West London background of Hammersmith, Notting Hill, Richmond Park and Chiswick, and evoking an atmosphere of long established Bohemian/outsider art/politics on both sides of the family. In many ways, the key to the narrative lies in Ian Dury’s nightmare upbringing in the days of “spastic” put downs, with disability seen as something to be hidden away. Not too surprisingly this led to a seething undercurrent of loathing for representatives of the society that rejected him and also provided zero insight into how to be a parent himself.

The author negotiates a very sensitive line in trying to explain and explore his feelings towards a generally absent father who’d try to compensate with the occasional extravagant gesture, but whose main function was to provide a cool bolt hole for Baxter bunking off school. I went to school around Hammersmith and know the area well. I always fancied the block of mansion flats overlooking the river by the bridge, and can easily imagine Ian Dury reclining on the balcony with his spliff, watching the river go by. It’s probably gone the way of the rest of megabucks London now, but back then Hammersmith was a lively mixture, with plenty of pubs and live venues, a real Wild West vibe around the Broadway at weekends and also a massive old doss house alongside genteel squares and tree-lined avenues.

Ian Dury was surely one of the less predictable successes of the punk era, being considerably older than the Rottens and Scabies of the new groups, with music that connected more to jazz, funk and soul, and plenty of pub rock gigging with his groups like Kilburn and the High Roads. Fortunately in the brief “anything goes” era of punk he was able to connect with the West London crew at Stiff Records. After the huge success of ‘New Boots and Panties’ (featuring a very young Baxter on the cover) he was suddenly a wealthy man who no longer had to hold himself in check, and could afford to buy a very cool London pad.

The descriptions of the scenes at the flat are the heart of the story. As part of his provocative side, Ian Dury had a Hammond organ, full drum set-up and hi-spec bespoke Tannoy speakers in his living room, leading to endless neighbour issues. It takes sensitive and perceptive writing to describe how the amiable stoner of the afternoon, chilling on the balcony with a mate and a joint becomes the leery argumentative drunk of the night. There’s also an ever changing background of changing partners, exes, new girlfriends and mates with cool names like Pete the Receipt and the Sulphate Strangler. Some of them took more interest in Baxter than others, and he isn’t shy of explaining how he learnt to exploit these relationships.

The latter character is a major figure in the story, being delegated as Baxter’s main carer for a lot of the time. Again, it’s a delicate balance between enjoying mad scenes like being taken around clubs with his mates in tow, with the Sulphate Strangler in all his psychedelic regalia, dispensing drugs or threats as required. On the other hand, he knows innately that his father’s inability/unwillingness to take responsibility isn’t right. There’s also the undercurrent of seeing the gradual downturn in his Dad’s music and success. After the glory years of ‘New Boots’ and hit singles like ‘Hit Me…’, the hit songs start to dry up. Meanwhile, he finds he can make as much money or more from doing cameo film roles and advert voiceovers, further diminishing his interest in music and leaving disaffected and underemployed Blockheads in his wake.

But don’t think the book’s a hand wringing agony fest. There are parts that I found laugh-out-loud funny as he recounts some of his wild teenage exploits, a farcical film trip in Spain with Joe Strummer and co, or his father’s poignant apology to yet another failed educational institution – “I enclose a cheque for £250, which should cover Baxter’s registration and what few lessons he seems to have attended. I am sorry to tell you he will not be coming back.”

It’s in keeping with the honesty that informs all the writing here that he doesn’t back down from telling some stories that don’t reflect that well on him, where he fully exploited the advantages of his vicarious celebrity. In many ways, it’s the key to the book – how Baxter finds his own voice, distinct from his Dad’s style and influence. There’s a really effective balance between the detachment and intense sensitivity in the writing – not unlike Joan Didion at times – which really captures the feeling of his story.

Meanwhile, Baxter Dury has made his own very distinctive musical career, with his languid, song/spoken louche tales of decadent ennui, blended with a strong French Yeye Pop influence. If in doubt take a listen to his second album, ‘Floor Show’, with its Peter Blake cover subtly referencing his parents’ connections to the artist and the craft. Like his father’s work, a lot of his songs have a short story like feeling, with their precise locations and characters, with songs like ‘Francesca’s Party’ and ‘Cocaine Man’ building up the atmosphere of all-nighters and curtains drawn late into the day.

I’ve read a few potentially interesting books recently which have felt more like transcribed unedited interviews, but there’s no helping hand here, which really shows in the quality of the writing, and how it conveys his very personal quest to understand and come to terms with all the complexities of his Dad’s character and the effect it had on his own life. As he says at the beginning, Baxter Dury had no interest in just writing a book about his adventures with his famous Dad, and in exploring his life and changing perceptions as he grows up there’s a recognition of things like love and loyalty that anyone can respond to.