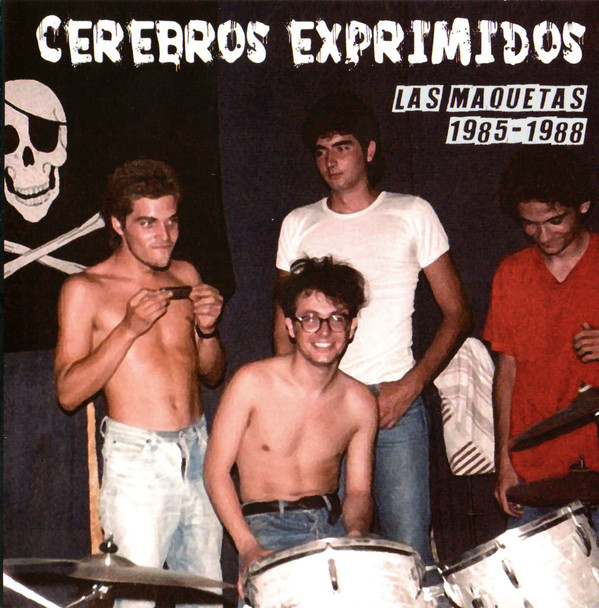 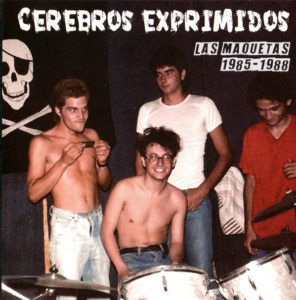 The demos by Mallorcan hardcore and punk outfit Cerebros Exprimidos are given a new lease of life.  They fused a US hardcore sound with the influence of early punk bands and Nathan Brown says these songs haven’t aged at all.

Cerebros Exprimidos (rough translation: Squeezed Brains) were one of the first punk bands in the Balearic island of Mallorca, forming in 1985 and splitting in 1998 having released a total of 7 albums, mostly on the Madrid based Munster Records.

If what locals tell me is to be believed, singer Jaime is something of a punk rock celebrity in Spain and when he made the trip over to Rebellion festival in the past he was mobbed by folks who knew him. A few years back I briefly met the legend and got to play alongside his most recent outfit the Chirri Kebab Motherfuckers (the name being a nod to Italian thashers Cheetah Chrome Motherfuckers). Seemed like a down to earth geezer and I was sad to hear he is no longer able to perform due to a degenerative health condition.  As a profile in the local paper demonstrates, he is renowned as the godfather of the Mallorca punk scene.

This CD, the name translating as The Demos, is a re-release of a 2010 compilation showcasing the band’s formative years.  3 demos that clock in at 31 tracks in total. Despite being “demos” the studio recordings are of higher quality than many punk and hardcore records that made it out as full releases during the mid – late 80s.

Cerebros Exprimidos emulated an early US hardcore sound without losing the influence of first wave punk bands. When they play fast, they sound akin to The Zero Boys, Christ on Parade and horror punks The Accused. There is a clear Black Flag influence and singer Jaime’s delivery frequently sounds similar to that band’s first 2 singers – Keith Morris and Ron Reyes.

When the tempo slows a little, the influence of The Damned, Dead Boys and The Cramps kicks in, and on the song Exprimelo it becomes abundantly clear they worship The Heartbreakers.

There is plenty of variety in the Cerebros sound. It’s not full on hardcore and punk. Terror En JacksonVille mixes up shades of Poison Idea with the full on feel of the Damned interpreting the Stooges and MC5. Las Cosas Van Mal even channels the Velvet Underground, albeit through a chaotic punk rock filter.

Their choice of covers is telling too. Quiero Morir is a Spanish rendition of Johhny Moped’s I Wanna Die (from their 1990s The Search For Xerxes LP but also featured on the recent It’s A Real Cool Baby). Any band who chose to cover Johnny Moped back then clearly knew their shit. Chinese Rocks should need no introduction.

In addition to the studio tracks they have chucked in a few live recordings. My Spanish being pretty poor beyond “please”, “thank you” and “beers” I cannot tell you if the live songs were on the original demos or included to provide additional flavour. Some of those live tracks are pure Black Flag worship with a bit of a rougher edge. Due to the recording, the trebley grating guitar and tinpot drums bring a new dimension – a sound akin to some of the really early scandinavian D-beat bands like Mob 47. This is DIY punk.  The garage and rock’n’roll feel is even more apparent on a couple of the live songs. It’s not just the musical style but Jaime’s vocals take on a timbre that is part Lux Interior part Joey Ramone with a rough edge.

As these songs demonstrate, Cerebros Exprimidos were able to embrace the new faster sounds that the counter culture was throwing out, without feeling the need to jettison their roots.  What I particularly like is that what some may have seen as a chasm between different epochs of punk was a wider source of inspiration to Cerebros on which to draw. This fusing of the styles doesn’t sound incongruous. Their hardcore songs have greater depth due to the first wave influence, particularly in the guitar sound, and their “slower” punky songs have greater urgency.  These songs sound fresh to my ears, no matter when they were recorded.