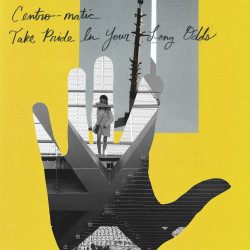 It’s a good month for fans of the Austin-based Centro-matic. The Texas band have backed their release of new album Take Pride In Your Long Odds with the re-release of their debut Redo the Stacks. This is their first release since 2011 and sees them in fine form, with Will Johnson having lost none of his ability to innovate and blend originality with some hard-wearing distorted melody.

Redo The Stacks was first released in 1997 and was in many ways a product of the solo ideas of Will Johnson, at that time still drummer in Texas band, Funland. Recorded and mixed by Matt Pence it also featured creative input from Scott Danbom, who both went on to join and remain members of the line-up.

Redo The Stacks is a perfect snapshot of a mid ’90s underground, lo-fi classic and Johnson’s sharp lyrics range from topics such as My Supermodel Girlfriend’s Gone AWOL to the fate of Starfighter#149. There is an immediacy about this album, re-issued in a double vinyl format and Johnson has spoken about the importance of the time it was released and an urge to play the songs live. “There was never a formal asking anyone to join. It was just like, ‘Hey, man, do you want to meet down at the rock club and play a show?’ That’s what happened in February of ’97, and that’s what we’ve been doing ever since.”

Since then Centro-matic have released nine studio albums and a host of EPs which repeatedly demonstrate the power and originality of this largely unheralded outfit. They have been dubbed a ‘band’s band’, making music simply for love and being appreciated by a hardcore loyal fan base which number many fellow musicians. This latest release offers ample evidence of why this dedication and integrity is so highly valued by those in the know.

Take Pride In Your Long Odds is a defiant but apt title for this bunch of friends who have grown up together and still enjoy each other’s company, creating music regardless of critics’ views. As Johnson says, “If there are entities telling you that there’s no way something is going to happen for you – take pride in your work and prove them wrong. If it’s worth it to you, you shouldn’t give it any less of a chance because of what someone else says.”

Will Johnson is spot on with that as the new album is a brilliant collection of songs that come packaged under layers of fuzzed riffs, keyboard swirls and battering of drums. Don’t be deceived by the opening title track’s mellow charms as Take Pride is soon blasting off with songs like Salty Disciple and Cynthia Glass. Academy Of Lunkers is two minutes of pure rock paradise while On The Ride Back is a pulsating gem with a guitar sound that should be bottled and sold in chemists. The final track of Through the Fog Then… also perfectly demonstrates the versatility of Centro-matic and is a perfectly judged balm after the more bruising sounds of earlier.

Take Pride in Your Long Odds is an album that is perfectly equipped to defy any opposition and, alongside Redo the Stacks, is a great opportunity to celebrate these hugely talented underdogs.

All words by Dave Jennings, find his Louder Than War archive here.