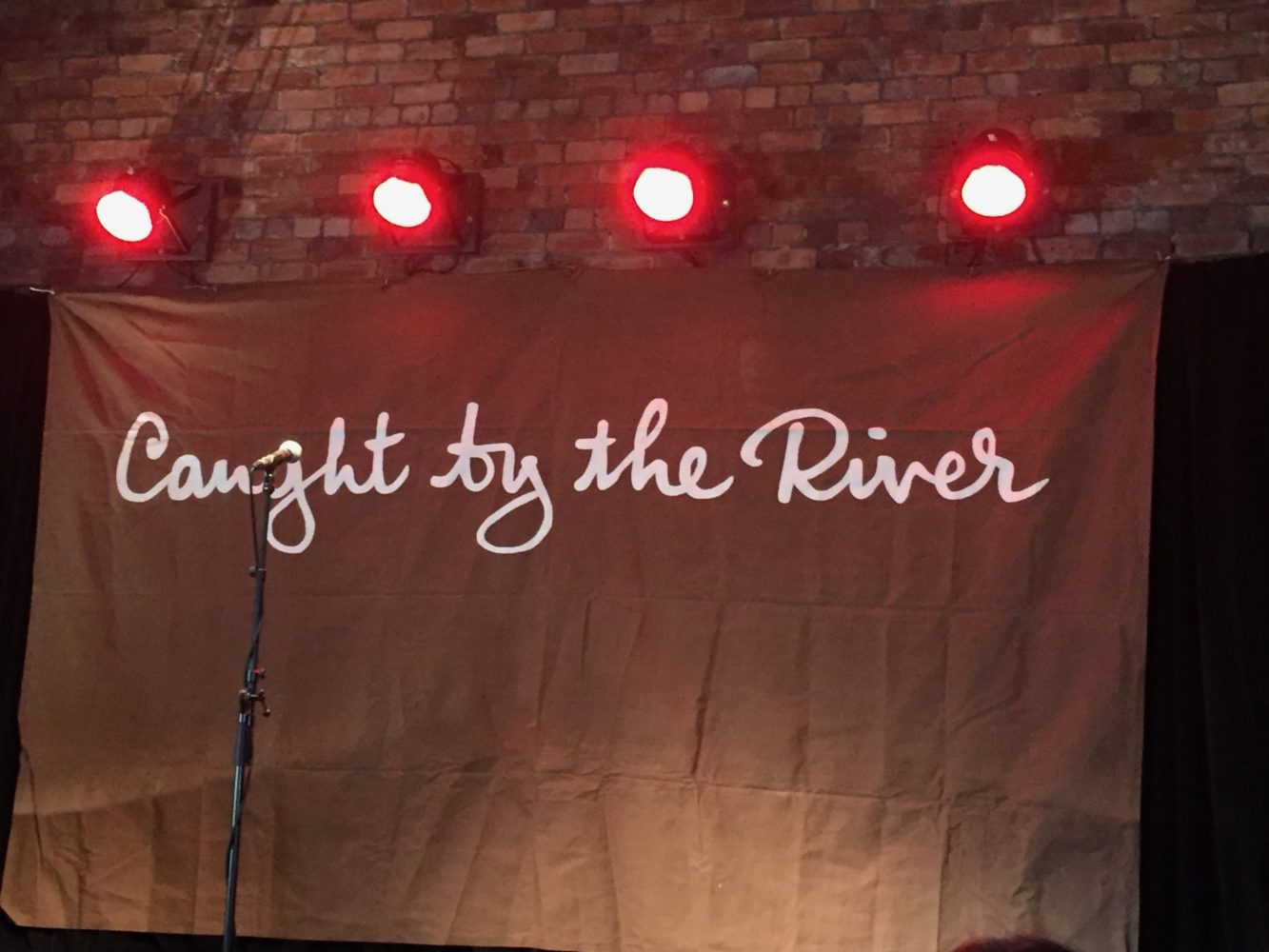 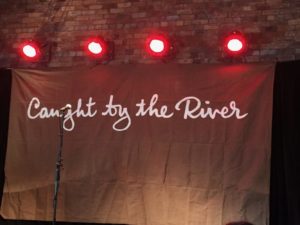 Caught By The River Calder

With spoken word events by day and musical performances by night, united by inspirations and reflections on place and nature, Lee Ashworth finds himself swept along with Caught By The River’s  stimulating showcase at the legendary Trades Club.

As the readings, performances and discussions evolve over the daytime literary portion of this mini festival, it seems increasingly apparent that we are at the eye of the hurricane, performers and spectators thrown into a crazed waltz, our flailing forms the pulsating walls of this vortex. What is the nature of place writing? What is the place of nature writing? Where does it begin, where does it end, what counts as interzone and who decides?

The first rule of place writing is that there are no rules about place writing.  There is no canon of places or specified terrain. At its best it is writer as cartographer and often the mundane is realised as terra incognito –  for once, against orders, we get off the boat and see the familiar through fresh eyes.  Such alchemical skill unites all of the writers and musicians reading and performing here today.

But Hebden Bridge is a town under perpetual threat of flooding, often on the brink of losing everything, and here we are on the day after Brexit was supposed to occur… to talk and to think, to think deeply about place, identity and our place.  In this context it is nothing short of literary friction capable of sparking the wildest of fires.

Standing at the centre of this vortex, John Andrews anchors a rare megalithic gravity around which today’s events unfurl.  Beginning with a recount of the genesis of Caught By The River, gears shift and a manifesto for outsider art is intoned.  This is an inculcation; a reading of initiation rites for lost souls and keen minds.  And suddenly, Kevin Boniface is behind the microphone, distilling the minutiae of West Yorkshire life through the medium of his postal peregrinations.  There are sandstone streets, specifics of litter, non-sequitur asides from path-crossing neighbours and details, details, sharp and alive.  But make no mistake, this is not dour, northern observational humour, this is crisp packet peacocks, the full dynamic range of flora and fauna of an ecosystem both urban and rural elevated to art in the fluttering uncertainty of an eye-blink.  This is Rorschach Yorkshire.  This is how questions are asked and identity is formed through what you see, through what you hear and what you write.  Is this how you find yourself?  Or how you lose yourself?

Zaffar Kunial tumbles over and over the sloping ring of a teenage fight after school; over and over for eternity, the white clouds spinning above the park grass and the unforgiving earth beneath his ribs.  In just a few succinct phrases, the mood has turned and the subject changed from municipally maintained impromptu boxing rings to the removal of rings from his departed mother: a poetic suckerpunch that leaves me reeling, struggling for breath.

Seconds out, Amy Liptrot looks left and right and leads us between the traffic, co-ordinates confirmed, across the Straße.  From the Orkney archipelago to the traffic islands of Berlin.  From the wilful defiance required to cross German roads where there is no crossing, to reaching the forbidden land beyond and all its illicit promise.  I’m minded of Ballard’s Concrete Island, perhaps residues of it linger in the detritus and the tell-tale signs she discovers amidst the undergrowth.  Utopian/dystopian?  It really is so hard to tell.

The dynamic changes when Tim Dee and Robbie Cowen take to the modest stage at The Trades Club.  There is, fittingly, the overwhelming sense in all of the writers and speakers here today, that they are immersed in questions of place and identity, from the symbolism and context of The Outrun to the foreground and subject matter of The Running Sky.  The conversation that ensues is enticingly rambling, dislocated and shaggy dog.  It’s a richness of pathways that cut across each other, zig-zagging through the trees.  The whole day is such a conversation, but here it is thrown open to include an eager audience.  My mind bubbling and bursting, my hand remains down because I cannot adjudicate between my own thoughts, clamouring above each other, a cacophony of half-formed crows.  References are made to Amy Liptrot’s trek into the badlands of cyberspace, a whole new cookie trail tracking an ex-lover through the backwoods of an aborted relationship.  Musings are made between tech, communications in a wider sense including modern roads and how our contemporary experience of the environment is mediated.  Perhaps the missing dimension from this conversation is time: efficiency and ergonomics are at the kernel of tech, regardless of how its use is distorted and distorting in the convoluted process of its adoption.  From the letter to the text and beyond, our desire for immediacy is insatiable in all aspects of our lives.  All that was once telegraphed is brought forth into an immanence of moment and the real becomes a casualty of the virtual, through all the shortcuts we take.

On many occasions, after a long teaching day especially, I have not wanted to go back into the woods with Luke Turner, but nevertheless, by lamplight, his book would be in my hands again, my eyes often closing… and opening in Epping Forest.  Rather than a criticism, my occasional reluctance is a testament to the unflinching nature of his writing and the honesty with which he lays bare his arboreal odyssey.  Out of the Woods is as vivid as it possible to be without affectation or dramatic embellishment, for none is required to tell his story.  Today, backed by a wide screen of trees rippling in the breeze and the extraordinary soundtracking of Spaceship Mark, Luke Turner confronts us with Epping Forest and takes us to its heart.  The tone of his voice in the delivery elevates the text from prose to performance and later from behind closed eyes I can still see the boughs and branches of those trees swaying, the leaves undulating, an ocean of green.  Someone commented recently that the trees in Twin Peaks had seemed so much larger in the recent episodes, as though the forest had become even more monstrous during the hiatus of the show.  The combination of visuals, delivery and sound in Turner’s performance take us into a weirder, wilder wood as his text takes flight from the page.

The trees recede, the Spaceship disappears and we are exposed on the chalky slopes of the south.  Away from the thrum of intensity there is a meditative stillness in the conversation between Rob St John and Will Burns.  The exchange is easy and charming and the kind of conversation so open and ranging that you feel part of it.  At this moment, I saw the embankments of the Ridgeway reach out and lay themselves like long protective arms around my shoulders… but in the performance during the evening, Hannah Peel struck the stage in red and black lightning while Burns smouldered, brooding in her wake.  Darker shadows scattered across the southern landscape, suddenly grey, white and austere.  Disappointments and disaffection with the veneer of life seems to strike deep down below the surface into something more primal, more timeless… something that channels, catches and entombs the mood.  The musicianship – the electronica and strings – the words and the delivery combine to achieve a potency usually associated with devilish pacts and the outsourcing of souls.  Chalk Hill Blue is a thing of rare and mysterious beauty.

The headlining performance of the day is from Erland Cooper, ratcheting up the levels of on-stage dynamism and intensity even further.  Together with his musicians and vocalists, Erland places his hands upon the keys and integrates himself into the cosmic assemblage: it is unclear where the composer begins and ends, swooping between keyboards and trading places with fellow musicians.  The conception of Solan Goose and Maalie may now be far away in time but the vibrations of their notes, distinctive and clear, are now resonating out through the amplifiers, through the auditorium, out of the Trades Club and over the Calder… from the cliffs of Orkney to West Yorkshire and far beyond.  Between the keyboards, between the keys, he rolls and dives, of wave and wing.  And then for Hebden Bridge the tide recedes.

Check out the video for Erland Cooper’s First of the Tide here:

Erland Cooper’s Sule Skerry is out now on Phases Records.

Will Burns and Hannah Peel’s Chalk Hill Blue is available on Rivertones.