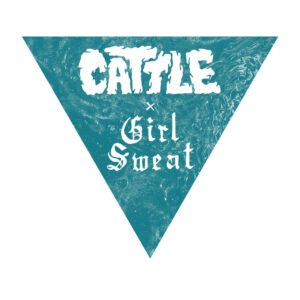 Louder than War’s Ioan reviews the latest release from one of his all time favourite bands, Cattle. This is a live release of a pummelling collaboration between Cattle and Girl Sweat.

I’ve been a massive fan of Cattle for several years now and have reviewed their last release here. I’ve also reviewed many of the offshoot/related bands here and here for LTW, and during that time I’ve noticed their gentle progression up bills on gigs and festivals, and have seen them embraced by the incomparable Supersonic Festival crew. Therefore, a new Cattle release is always a big occasion in this household and this spilt LP release with (the brilliantly named) Girl Sweat is no exception. Plus, I’m new to Girl Sweat, so this collaboration was a no brainer way into finding a new favourite band!

March 16th sees the vinyl release of ‘Live at Assembly House’ with this unique collaboration between the two bands. Featuring Cattle (double drum noise rock attack) and Girl Sweat (one man garage-noise maniac), this LP was recorded live in front of a crowd at Assembly House (Armley, Leeds) on 1st July 2017 by Ross Haldon.

Side One features ‘Light Assemblage’ a single, twenty-minute semi-improvised piece by Cattle and Girl Sweat.

The 20 minutes plus of the first (Cattle) side starts with an intro of soaring (and roaring) noise over a gentle electronica. It’s an all encompassing noise that immediately envelopes the listener and holds them incapacitated for the duration. It’s intense, unearthly and unsettling. That is until the 5′ 20″ minute mark when the mood shifts and the barking distorted vocals come in and the tempo ramps with the tribal drums. The noisy loud vocals become completely all engulfing and the experimentation and electronica is ramped up and up to a deafening and intense mid way crescendo. This band are absolutely untouchable.

The tempo shifts with a thick throbbing bass and more pained vocals. This unleashes an absolute fucking cacophony of noise, electronica, drums, vocals, noise that again, builds and builds until a (greatly received) impasse leads way to avant garde jazz experimentation, and a flurry of intense discordance and dissonance.

And just when you thought it was all over, they save the last 3 minutes of the a-side for an absolute discordant, fucking din that is unbelievably cathartic, yet disturbing and unsettling. The sounds of the audience clapping and shouting their appreciation at the end of this 20 minute pulverising performance shows the love new found love there is for Cattle.

The absolutely brutal pummelling Cattle performance is still rattling around ones head as side two starts. The all encompassing Girl Sweat chant of “I have the power of sweat. Sweat is the power of me. I feel sweat on brow. I feel pleasure in my heart. I feel power in my soul. It brings beauty one and all”, is hypnotic and pulls the listener into this cult kicking and screaming. This leads onto a full on experimental freakout encompassing the tribal chanting and repeating of the words ‘power’. The noise and intense din is ramped up and up alongside the disconcerting, yet hypnotic chanting. The intensity builds and builds as does the discomfort of the repetitive relentless noise. Half way through come the vocal addition of Cattle and the intensity and tumult of the collaboration is devastatingly realised. So much so that the track ends abruptly at 21.26 and the silence it creates is deafening.

I don’t think I have come across such a noisy, yet hypnotic and cathartic release for ages. It’s a format and collaboration that is not for the faint hearted and is not an easy listen on first or second tries. Yet, let a pulverising barrage of noise and mayhem into your life, and you may find yourself as completely in love with these two bands as I am. Buy it now.

The live event captured and mixed by Ross Halden of Ghost Town Recording, mastered by Dom Clare of Declared Sound with the live video captured by Phil Jones. The LP has been self released with friends die cutting the outer sleeves and Discordant Sun screen printing the inner sleeves.

Girl Sweat and Cattle will be performing their collaboration set (side one of the record) live at the following UK dates;