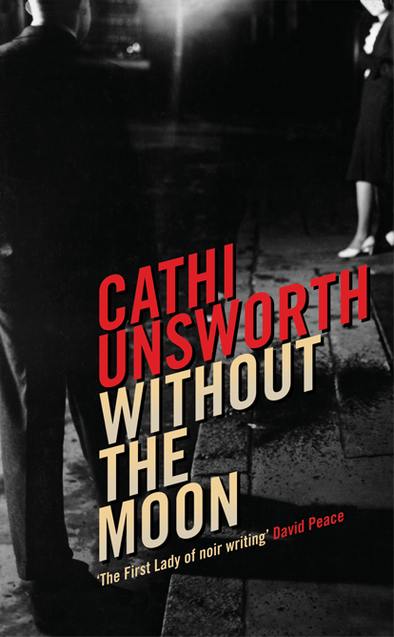 Cathi Unsworth – Without The Moon

Without The Moon is a compelling foray into the mystical and magical crime noir world of wartime London. Writer Cathi Unsworth publishes her fifth novel having already clocked up several prize nominations for previous works; Without The Moon is a strong contender for further accolades.

Set in and around London over a two-week period during World War II, Without the Moon is based on a series of murders that occurred during 1942; London’s women go about their way whilst a serial killer works amongst them. Detective DCI Greenaway races to find the Blackout Ripper and end his slaughter. The imposing figure of Waterloo Bridge under construction, despite this being wartime, lingers ominously over proceedings.

London in the Blitz is tinged with hues of friendship, humour and the flames of human desire, be they around physical, spiritual or emotional connections. Unsworth creates an enticing and engaging ambience drawing on historical events for murderous subject matter, depicting the criminal and precarious world of prostitutes, gangsters, coppers, mediums, and others entwined within the story. A supporting cast of Lyon’s Tea House nippys, fur coated lipsticked ladies, spivs, soldiers and reporters embroider the scene.

Unsworth’s prose leads the reader behind the façade of civvy street, where she creates intimate, engaging tableaux vivants inhabited by intrigue, superstition, despair, friendship, sex and death. Amongst the Cockneys, political intelligentsia, and the ladies from their many walks of life, Canadian airmen, Jewish and Irish immigrants also populate the pages of the novel. Portraits are convincing and compelling, in a beautifully and intricately detailed world. As well as loss and loneliness, wartime brings an intensification of impulsivity.

Lyrically evoking the era and its many flavours the two-part novel is segmented into chapters that take their titles from jazz, swing, and popular songs, from ‘Mood Indigo’ and ‘Peg O My Heart’ to ‘Ain’t Misbehavin’ and ‘Haunted Nights’. In true noir fashion much of the action takes place after dark, where auras and illusions work so well. Anchoring the reader in the period there’s a tangible sense of early 1940’s London triggered by the senses, smells, sounds and rituals. The narrative dances between the detective’s quest and the women’s stories, building to a final twist and a certain fateful retribution.

Unsworth has a theatrical style, and offers huge variety within her dramatizations, even the walk-on characters hold their own in momentary appearances. The author’s gritty approach leaves no stone unturned; descriptions of events are tough in detail without gratuitousness and whilst there are a number of gruesome moments along the way, there are many feisty and comedic turns. The novel cries out for a transition to the screen.

The saying goes ‘there is no honour among thieves’;  in Unsworth’s writing there is a certain code; a sense of acknowledgement that runs from the working girls to the hacks and gangs, all of whom take a stand in the face of this violence against women. DCI Greenaway cuts a lonely figure in his quest for justice, whereas the women seem to sow the seeds of friendship within their networks.

A beautifully crafted analogue world, that crackles with tension, atmosphere and human sentiment. Without The Moon is the kind of book you find yourself reading slowly because you don’t want to reach the end.

More about Cathi Unsworth can be found on her website: cathiunsworth.co.uk

All words by Bryony Hegarty.  More writing  can be found at her Author Archive