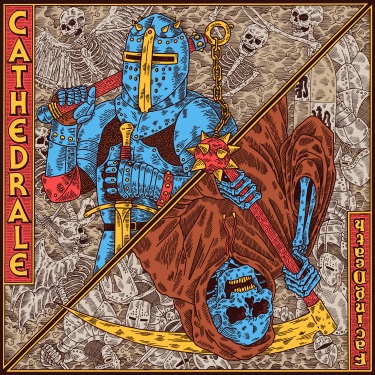 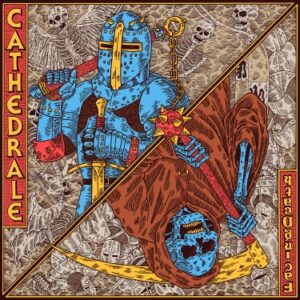 French post-punk garage band Cathedrale return for their second album, adding a dose of reverb-soaked pop and wrapping it up tightly wound riffs and rhythms. Ten tracks of just-about-controlled chaos full of fervour that add to the great Toulouse-based scene currently gathering momentum.

Coming up  as Catherdrale open their second album, a pulsating fuzz slowly builds for close to a minute before the chiming guitars of lead single Yet, So Easy ring in to launch what turns out to be an infectiously catchy album that boils over with hooks and winding riffs over the spaced-out garage sound that is emanating more frequently from France these days. Cathedrale more than hold their own next to labelmates Slift and Dirty Water’s Johnny Mafia and  current single and album highlight I Think I Can ramps up the stakes in terms of earworm melody, doubling down and reaping the rewards.

There’s a charming naivety at times to the way that the guitars spiral, not concerned with following the vocal melody, almost toy box underlying riffs through the verses and breaks that wind along and draw you further into the music. Once picked up on, they are hard to let go as they slowly pull you under. The title track, which opens the second side, lays down an almost Pulp-like basic riff over which the rest of the band add sputtering drones and itchy beats before, after a full minute and a half, it suddenly turns about and into a lo-fi masterclass, the lyrics falling out carelessly over the constant strumming. When they rock up with more urgency, such as on I Don’t Like My Shadow, there’s a certain Jay Reatard influence to their melodies and rhythms, although they resist the urge to drown it in distortion and thus retain the poppier elements. It’s a resistance that they give way to somewhat on the excellent Signal, where the added fuzz is more than welcome within the sound of the album.

Facing Death is a wonderful album chock full of innocent lo-fi garage that seeps deeper into your consciousness with each listen. The underground scene in France, and specifically in Toulouse where Howlin Banana are based, is really growing and Cathedrale are one of a host of bands that could really put it on the map in 2019.

Watch the video for Catherdale’s I Think I Can below: