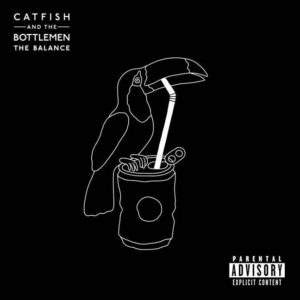 Catfish and the Bottlemen

Catfish and the Bottlemen are back with a new record that will keep the huge waves of people attending their live shows and undoubtedly be a fan-pleaser in the process.

On this third record, the welsh band find themselves experimenting with bigger sounds than ever before but, ultimately play it safe enough to guarantee further success. Early proof of this is with the song Longshot, which had been previously released as a single. It already had fans champing at the bit upon release, eagerly awaiting the rest of The Balance to reveal itself, and rightfully so. The single is an indie thumper that kicks off the album as it means to go on. The guitar and drum combinations sound vibrant and Catfish present the listener with a huge, catchy chorus, as they so often do. The arenas around the UK are sure to continue selling out thanks to this record.

The second track, entitled Fluctuate, shines a similar light on the band in terms of its production and execution. It has the group’s trademark edge, which often separates them from other indie bands of this generation and Van McCann’s vocals don’t disappoint, as every line is delivered with venom and just the right degree of ferocity.

Lyrically, there is a theme running through the record that focuses on relationships. The topic finds its way into most songs but, the band always find a way of making it sound catchy and captivating. That’s one of the most impressive aspects of the group. I’ve no doubt that at least a couple of tracks from ‘The Balance’ will be showing up in indie-nightclubs over the coming weeks.

Catfish and the Bottlemen are at their most intriguing when they try new things. The song Mission, shows how the group can move at a different pace. It presents more vocal range than we’ve heard before from the group and the instrumentation is exciting, constantly building in tremendous fashion as they song reaches its finale. This is unfortunately something we don’t get to see enough of from the band and I predict that many will feel they are being delivered more of the same when they receive this latest record. That isn’t necessarily a bad thing though, as the group have created another solid set of songs and Catfish fans will likely be pleased to get all of this new material in one go.

Album closer, Overlap is an amazing way to pull the curtain on the 11-track record. It has it all: choppy, high-velocity guitars, loud, pounding drums, and a vocal delivery that feels uncontrollable. It’s the most exciting track on the record and will warrant endless plays from fans of the group. This song also displays itself as a fantastic entry point to newcomers of the band, it shows off the highest of heights they can reach when everything falls into place.

All in all, Catfish and the Bottlemen have created another solid record, proving three to be the magic number when it comes to their discography so far. While the album doesn’t offer anything completely new from the Welsh rockers, it does build upon a sound they’ve been working towards; a sound that is both edgy and undeniably catchy. The success just can’t seem to stop and ‘The Balance’ shows us exactly why that is.