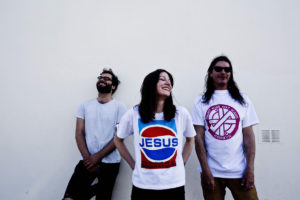 Louder than War’s Ioan Humphreys finally reviews one of his favourite band of 2016!

I first came across Casual Sect at last year’s Supernormal festival (2016). At the time i wrote “Fast and furious, Casual Sect were very confrontational and noisy. Fronted by a ferocious girl who could scream like a banshee and pull awesome shapes, they had a very skronky/80s no-wave/Teenage Jesus and the Jerks vibe to them”. At the time they were one of the absolute standout bands of the weekend. And listening to their latest release? I take absolutely nothing back.

The Static Seekers follows on from their debut release The Hidden Persuaders from 2016 and in between they have  shared stages with Part Chimp, Terminal Cheesecake, as well as appearing at London’s experimental central Cafe Oto, the afore mentioned Supernormal Festival and more, Casual Sect are a force to be reckoned with.

Opener, ‘Dead Paul’ starts with confused, distorted sounds that turn into a heavy as fuck dirge riff that eventually morphs into a 100mph spasmodic drumming and shouting fest of biblical proportions that leaves one wondering “what the hell did i do to deserve that??”

Follow up ‘You don’t have synesthesia’ just adds insult to injury with its feedback start and then straight into the fast as fuck refrain of the title track. The vocal delivery of Maggie Muldoon is ferocious, unshakable and reminds me of Melt Banana and more recently, Japan’s Otobeke Beaver. However, comparisons aside, Casual Seem to revel in the joy of making an absolute racket albeit with a groove and a (i shit you not) danceable tune.

The song title of the year ‘A Komodo Dragon ate Sharon Stone’s Husband’ starts off with gorgeous distortion that leads into a killer riff and Muldoon’s screaming vocals over the top. Cacophonic guitar, drums and a perfectly abrupt climax just add to the perfect confusion this band creates.

‘Mohair fetish’ continues very much in the same vein with a throbbing guitar and distorted bass riff that drives this pounding  and thumping track. It’s with Muldoon’s ballsy and noisy as fuck vocals cut through the noise and it makes for such a gloriously unrelentingly kick ass tune.

‘From here to insanity’ is the first of two changes of pace in this relatively short album. Muldoon’s spoken word vocals cut through the atmospheric noise with warnings of “apathy” and “indifference”. As the tensions and aural assault progresses with guitar noise, the final throes of “surrender your lives to us” is quite the unhealthy invite that I’m quite willing to undertake to be honest.  And as the last two tracks hit us like a bizarre freight train, one is treated to the heavy as shit bass riff and buzz saw guitar brilliance that is ‘LSD OD’. Replete with Muldoon’s megaphone vocals and some otherworldly backing vocals, this feels like the final hurrah for this band.

However, ‘Hard Om’ is a brilliantly demented track that showcases the avant garde jazz influences that Casual Sect quite obviously has (i.e. weird time signatures, vocalisations, etc). But it all make sense when it is presented in relation to the previous 6 tracks.

Casual Sect make one hell of a racket and their noisy and bizarre way of expressing themselves may not be for everyone. But I for one absolutely rate this band and i urge you to see them live asap. Essential.

The Static Seekers was released through Hominid Sounds on limited edition cassette and digitally on July 14th through here.

Casual Sect can be found on their Bandcamp and their Facebook.