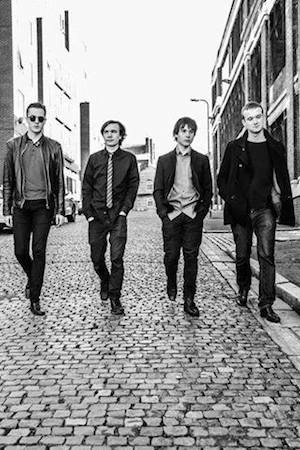 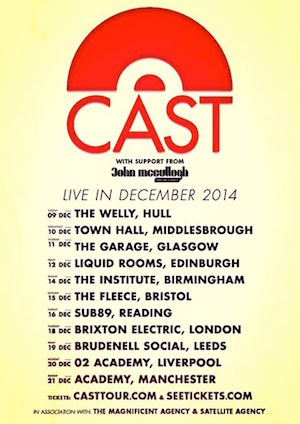 Pedigree Britpop legends CAST stormed the Liquid Room in Edinburgh, treating an almost frenzied crowd to a blistering set, after seeing that same crowd expertly primed by 17 year old birthday boy, John McCullagh and The Escorts. Prior to that, Glasgow based Stonehouse Violets, fresh from a full band tour with Mark Morris, gave a relatively good account of themselves.

Doncaster’s own teenage troubadour, John ‘Lennon’ McCullagh, however, signed to Alan McGee’s new label @359 Records, at the precocious age of 15 years old. This forcefully demonstrates that McGee has lost none of his uncanny ability to Pop the Cork on Would-Be-Great-Vintage! McCullagh et al delivered a pristine novel set of polished neo-billy/country-pop songs like Box Of Tricks, with an energetic, shiny aesthetic, the likes of which hasn’t been seen since Alex Turner and his Arctic Monkeys stormed onto the scene.

That they’ve done so with collaborator/producer, and CAST’s own song writing master, John Power (guitar/VOCALS), is no accident of serendipity. Power has featured in some of the most lauded guitar bands of our age:- CAST and The Las.

Although CAST are having a renaissance, they have not been idle. Power starred as John Lennon in the theatre production of ‘Lennon’ in their mutual home town of Liverpool, at The Royal Court Theatre. He has recently completed a charity record with Suggs from Madness, Mick Jones from The Clash, and The Farm. Liam ‘Skin’ Tyson (Lead Guitar) has been playing guitar for Robert Plant, and Peter Wilkinson who has been touring with Shack, had been unexpectedly replaced due to a pressing health concern by Jay Lewis on bass. Jay has played with John Power in solo projects as well as The Las. Keith O’Neil who, for the first part of the tour, was replaced by Paul Weller regular, Steve Pilgrim on drums, also played on the last CAST album.

The band, who reformed in 2012 with original producer John Leckie (Stone Roses, Radiohead, The Fall), conjured up that old CAST magic with ‘Troubled Times’, their first studio album in over a ten stretch. The new, as yet unreleased and untitled album, is due out in 2015. However, three songs from the end of the set, the crowd were treated to ‘Baby Blue Eyes’, a disgustingly catchy and excellent pop song!

They make it look so easy!

By the time the tecs had prepped the stage, the air was fraught with tension. It was like there was a ticking bomb somewhere, and appropriately they exploded into ‘Time Bomb’, ‘Promised Land’ and ‘Sandstorm (Blowin’ in My Head)’ in rapid succession, stopping only for Skin to swap guitars, and Powers to exchange an acoustic for a Telecaster. Pretty soon people were coming over all emotional and one or two were seen to be wiping their eyes, obviously overwhelmed at the return of such a well-loved band.

Yes, there was a lot of love in the room- and CAST showed that they still have the minerals, as they say in Scotland, to excite and exhilarate.

As Scottish audiences are wont to do, they spontaneously burst into vociferous harmony with John Power, Skin and Jay Lewis throughout. Weller’s drummer showed that he was an inspired replacement and that he also has the minerals.

‘Fine Time’, ‘Four Walls’, ‘Beat Mama’ and ‘Tell It Like It Is’ came thereafter as the crowd increased in boldness and enthusiasm – arms wind-milling back and forth, and people ducking the hazard. Beer was starting to fly and at one point John Power appeared to catch the boozy trajectory of a Pint full frontal, in Liverpudlian good humour.

‘I’m So Lonely’ (I’ve just got to let you know-just let the feeling grow…) was highly reminiscent of The Beatles, while ‘See That Girl’, ‘Magic Hour’, and ‘Live The Dream’ saw sporadic expressions of adulation from the , in-no-pain crowd before a rapturous football terrace like sing-along in the heavily anticipated ‘Walk Away’.

The audience nostalgically threw their heads back, belting it out in complete abandon with Power as his right leg went up and down like he was a metronomic bi-ped. At times he half smiled in amazement at the volume of this relatively small, compact but Sell-Out Edinburgh audience.

After ‘Flying’, ‘Guiding Star’ and ‘Free Me’, the band left the stage but the crowd were having none of. Before long, they returned and treated us to what we have in store in 2015, with the epic new tune: ‘Baby Blue Eyes’.

Prepare, undoubtedly, to become familiar with this song in 2015…

Can I get a Witness?

‘Box Of Tricks’ was released as a download on 13th October 2014 and as a 7” edition on 20th October by John McCullagh and The Escorts.

All words by Harry Mulligan. More from Harry can be found at his Louder Than War Author Archive.