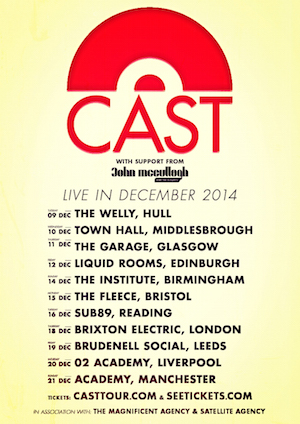 The bar at a Cast gig is a bit more civilised these days. Although people haven’t exactly formed an orderly queue, everyone seems to be acutely aware of who should be served next. It certainly is a strange phenomenon, especially when considering that the Lad Culture of the mid-90s seemed to embrace bands such as Cast and almost encouraged the very opposite behaviour. In a nutshell, everyone’s grown up a bit.

1) John Power looks a bit frazzled.  Maybe it’s a cold or maybe he enjoyed Liverpool a bit too much last night and
2) Guitarist Liam ‘Skin’ Tyson looks like a homeless mad man with a beard that appears to have been growing since the last time Cast had a Top Ten hit! That’s what touring with Robert Plant will do to you!

‘Timebomb’ from 2012s ‘Troubled Times’ album kicks off the evening before they hit their stride with 1995s ‘Promise Land’.  ‘Four Walls’ is greeted like an old friend whilst new track ‘Baby Blue Eyes’ and 2012 single ‘See That Girl’ are strong enough to suggest that they could well have been hit singles for Cast, had they been released in the mid-90s.

UB40 are playing next-door tonight at Academy 1 and some wag in the audience keeps requesting ‘Red Red Wine’ much to the amusement of both John Power and the audience!

Cast’s debut single ‘Finetime’ brings back a thousand memories of that glorious summer of ‘95 whilst the inexplicably big hit that was ‘Flying’ sounds better live than it ever did on record.

Power’s voice feels the strain slightly on ‘Magic Hour’ whilst the harmonies on ‘I’m So Lonely, if not quite as good as they were back in the day, do still induce a few spine tingling moments.

The big guns come out in the shape of ‘Walkaway’, ‘Live The Dream’ and ‘Sandstorm’ whilst ‘Tell It Like It Is’ channels the spirit of The Who with more fire and skill than it ever did during the bands first incarnation and also serves to display what a wonderful guitarist Liam ‘Skin’ Tyson actually is.

By the time we get to ‘Guiding Star’ and the vastly underrated ‘Free Me’ it becomes apparently just how many hit singles Cast actually had.  ‘History’ displays those outrageous guitar harmonics whilst ‘Alright’ inevitably closes the set on a high.

Whilst the audience file out of Academy 2 tonight, the Morcombe and Wise version of ‘Bring Me Sunshine’ plays out over the PA.  As it does, it becomes clear that even though Cast’s days in the sun may well be behind them, a writer such as John Power should never stop creating and if that means churning out the hits in order to get your new material heard as well – then we might as well celebrate those hits while we can.

All words by Michael Halpin. More from Michael can be found at his Louder Than War author’s archive.