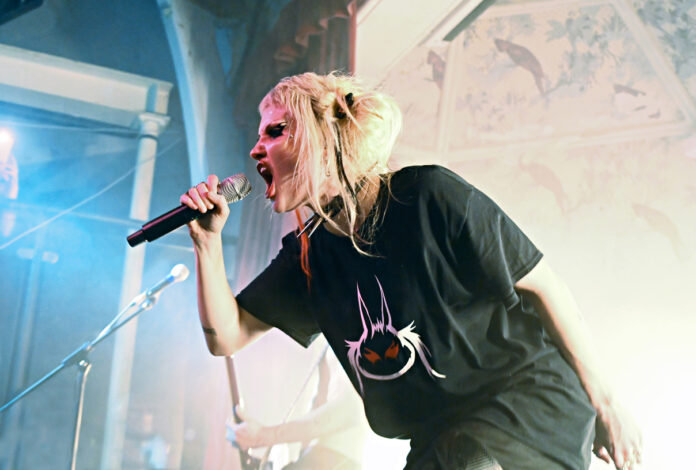 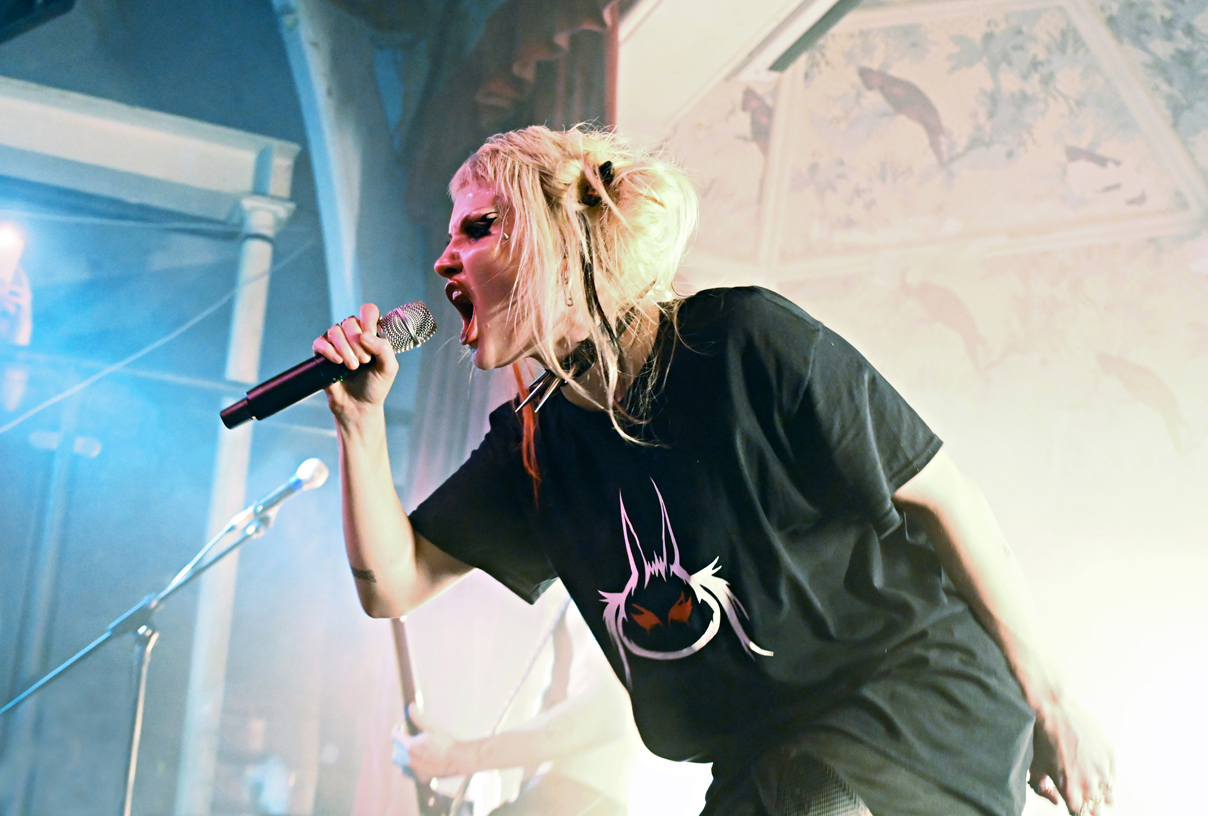 Cassyette brought her first headline tour to Manchester Deaf Institute this week. The high expectations generated by impressive live reviews in recent months proved well-founded as she delivered a thrilling adrenalin-fuelled set, that left her audience desperate to hear more.

Climbing the stairs to the Deaf Institutes Music Room I’m first struck by the crowd. Visually, this is a gathering of alternative tribes. Piercings, vibrant hair, tattooed body art are much in evidence; Goth comes to mind but it’s more varied than that. Black is clearly the colour of preference with Wargasm T-shirts a common sight. Mostly they’re young and female- although I probably shouldn’t say that in these days of gender identifying. Scattered among the more youthful throng are older musos, presumably drawn by favourable press or perhaps curiosity.

First on stage is Alien Blaze. Combining indie guitar, some dream-like ethereal melodies with almost spoken-word vocals and electronic beats she’s musically enjoyable and well received. She’s certainly visually arresting; wearing oversized rubberlike yellow trousers with black angels wings attached to her shoulders and fluffy headphones. She’s undoubtedly dressed to make an impression but for me, a combination of low-level lighting and energy levels mean her short performance lacks the real spark of what was to follow. 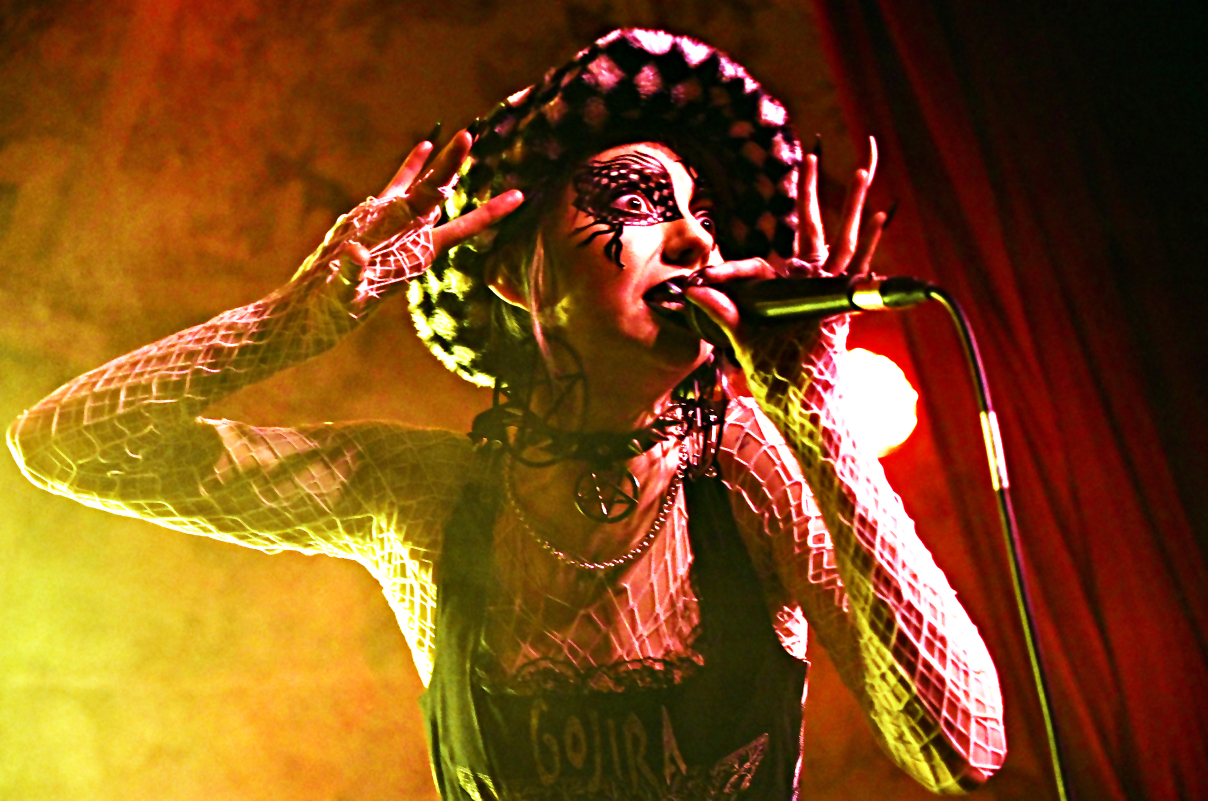 Bambie Thug takes things to a different level. Musically she delivers a real mash-up of genres that lyrically encompassed themes of the occult, sexuality and drug use. Necromancy brings rock riffs overlaid by scratching and a really catchy chorus while Heirophant has almost spoken-word lyrics over electronic beats. P.M.P – Pussy, Money, Power is more hip hop backed by dark electronic beats while Birthday sees a slow insidious beat backing a tale of drug use.

Sonically, the underlying sound is at times reminiscent of Gary Numan’s current work; dark doom-laden electronica provided by Bambie Thug’s accomplice. Dressed in a black hooded ankle-length cloak with piercing eyes peering through the mirk he provided a real counterpoint to Bambie herself. Some performers have real stage charisma and she has it in abundance. A constantly moving presence dressed in matching black and white checkerboard trousers and hat, Gojira vest and face paint. She’s impossible not to watch; a real talent and someone I expect we’ll be hearing much more of in the future. 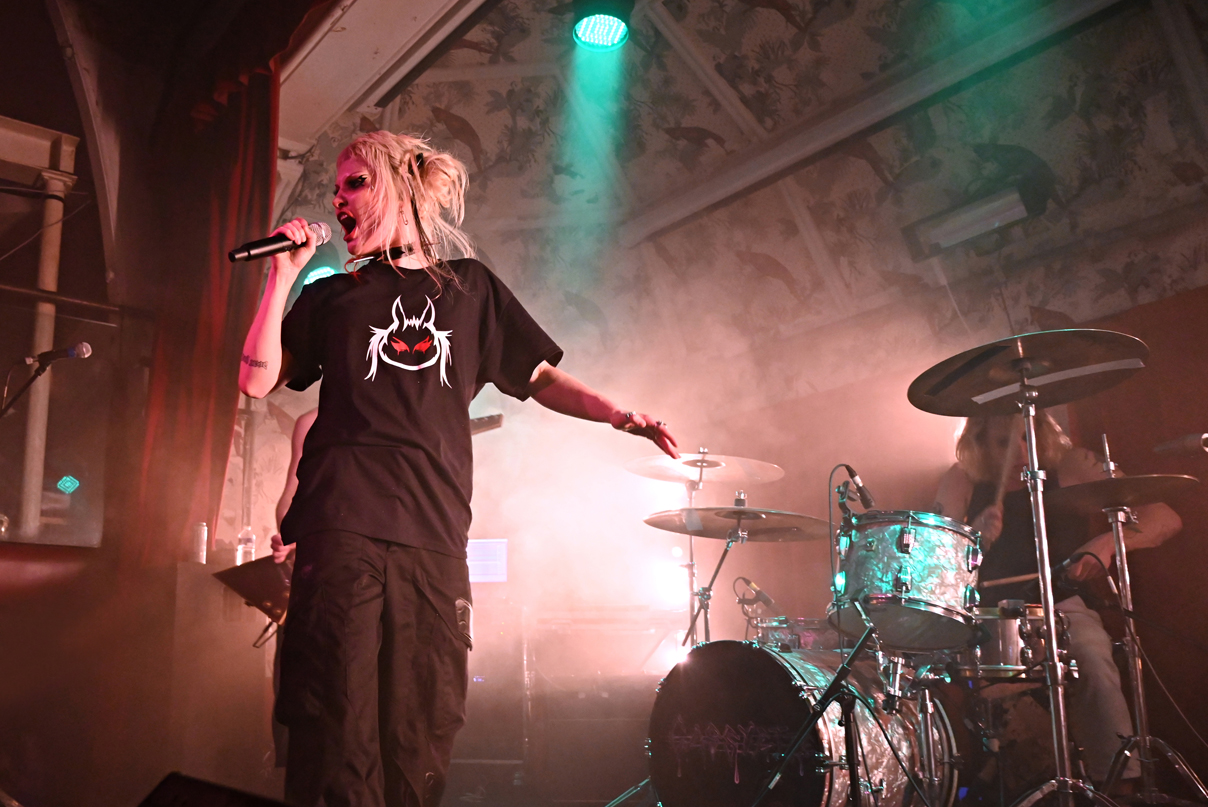 Cassyette opens with the explosive Like That; pure energy driven by powerful rock riffs and infectious vocals delivered at 1000 miles an hour. The Deaf Institute erupts in a frenzy of bouncing and jumping. Dear Goth follows and the pace momentarily slows but spoken word lyrics soon build as guitar kicks in and the song builds to something far more primal and visceral than the recorded version while still very briefly finding space for some (pre-recorded) backing chorus. It’s followed by Petrichor, which opens with urgent rock riffs that briefly give way to semi-spoken vocals over electronic beats. The calm doesn’t last; erupting again with euphoric vocals as the guitar bursts back into life to transport us toward a frenzied climax.

The unrelenting, blistering pace continues for a couple more tracks before September Rain brings a degree of respite. Opening at a slower pace with more melodic guitar and tuneful vocals, it’s not quite plagiaristic, but very reminiscent of something from decades ago that I’ve been struggling to remember without success. We’ve only got a few brief moments to catch our breath though as the song soon builds to return us to the brutal force of the performance. 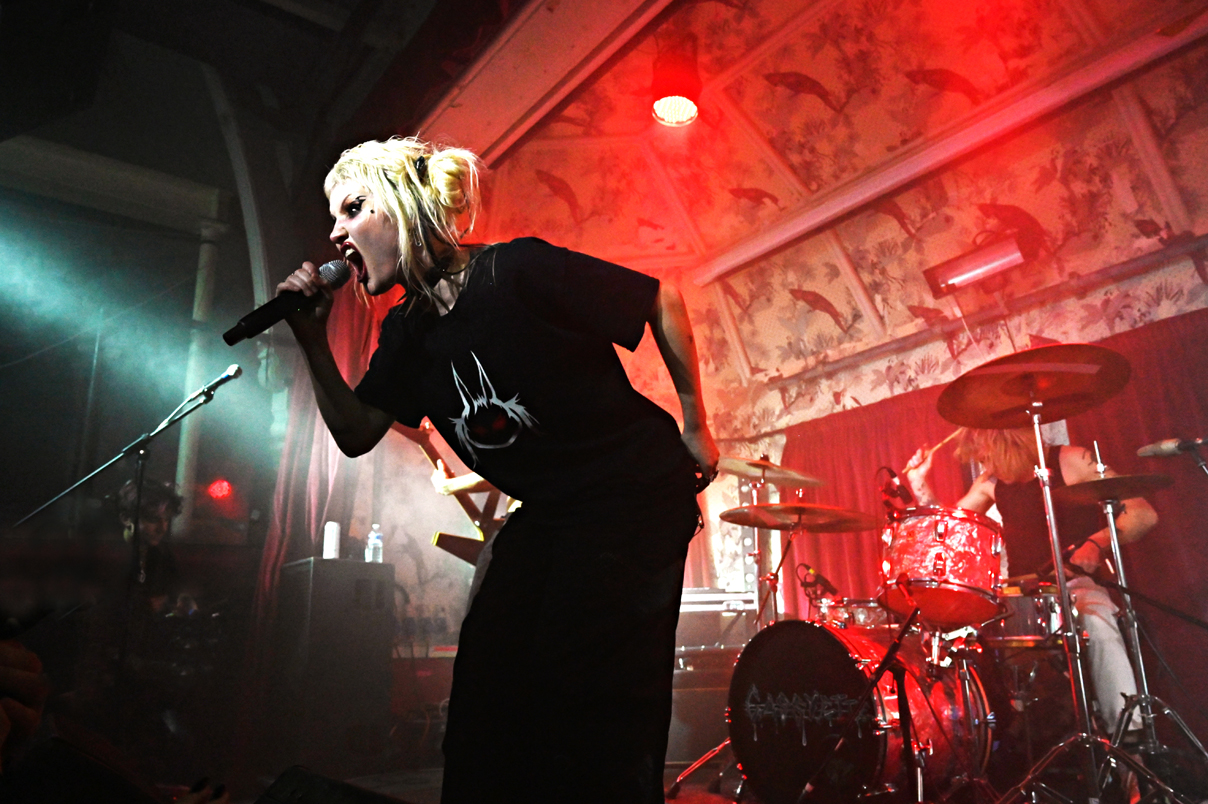 As their set progresses the guitarist becomes a growing force of nature. Bare-chested and tattooed, with shaved head, he’s an increasingly menacing presence. Prowling the stage on either side of Cassyette as she statuesquely holds court centre stage. Meanwhile, behind them, the drummer is holding everything together in almost animalistic style. He seems to be drumming with his whole body and it perfectly compliments the musical power and visual image of the band.

From here on we’re back to almost non-stop energy and aggression, as we hurtle onward. Dead Roses also opens with another vaguely familiar riff. This is pure adrenalin-fuelled rock n’ roll on speed that’s travelling like an out of control express train. The bouncing crowd’s energy that’s pulsating through the Deaf Institute’s sprung wooden floor is making my photography increasingly difficult. 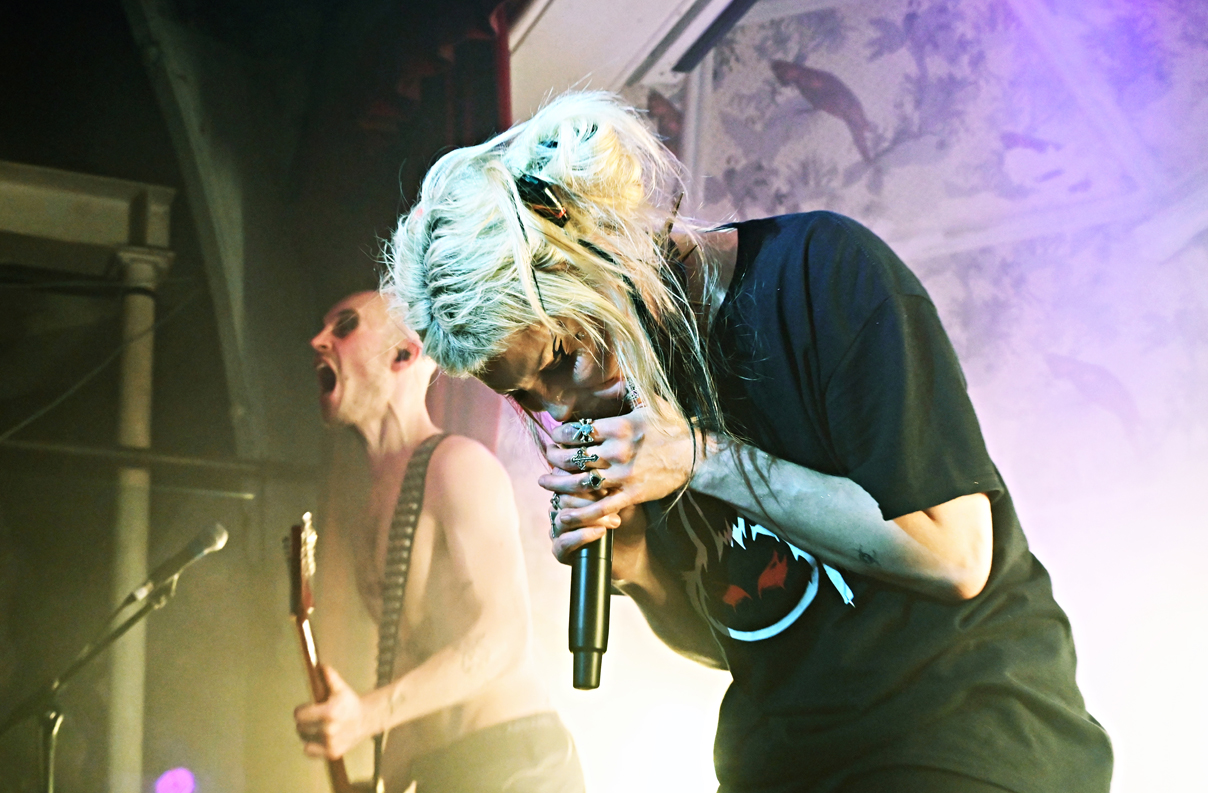 Mayhem comes next, introduces a slower more rock-based rhythm with powerful vocals and even a brief guitar solo. The pace may have slowed a little but there’s still real urgency in the music. We’re even treated to an outbreak of old fashioned headbanging.

The band’s relentless energy continues until we reach the final number Prison Purse. With an intro bearing similarities to Dick Dale’s surf guitar on speed, it’s a frenetic punk-inspired opening that suddenly comes to an abrupt halt as they pause for breath. The instruments fall almost silent for some spoken word from Cassyette. Of course, the calm doesn’t last and the rampaging power quickly returns for one final breathless minute.

After leaving the stage for probably the shortest encore break I’ve ever witnessed they’re back for a brief reprise of Dear Goth. And then it’s all over. Their whole set has lasted less than 35 minutes, but what 35 minutes! You couldn’t wish for a more committed, energetic, punk-inspired dose of adrenalin-fuelled rock n’ roll. If you like raw unadulterated rock or punk without pretensions go and see Cassyette somewhere up close and small while you still can!