Home Music Bands Cassels: We Wander In The Night/Rinse And Retreat – single review 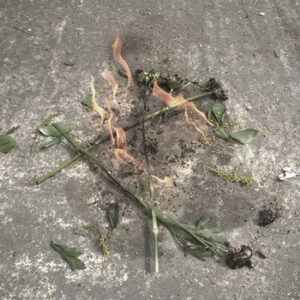 The trend within certain scenes seems to have been leaning towards two-pieces for a while now. And even in the mainstream they’ve been doing a darn site better than everyone else. Whereas musically there are almost no comparisons to draw between the likes of Slaves, God Damn, Royal Blood et al. the general public are easily impressed by their live shows, and it seems to be a formula that works for the record labels.

This may, or may not, prove to be the case with Cassels who are, for better or worse, a two-piece. The first time I saw them was supporting East London garage favorites Love Buzzard (also a two-piece) at Powerlunches, Dalston – a venue that has probably the worst sound to best reputation ratio I’ve encountered.

What first struck me wasn’t that they were a two-piece but by how young they both looked, all chiselled features and band tshirts – not a beard in site. What struck me second was the noise. I’m not kidding it literally struck me. Now, I’ve been to some loud gigs in my time (most of which in that godforsaken basement) and that shit was loud. But, the playing was tight, the harmonies were near-perfect and their cover of Search and Destroy by The Stooges was unexpectedly good. I was sold, I caught up with them afterwards and they were perfectly lovely chaps so I decided to catch the next show. Which I did. A number of times.

And now I have the baby blue 7″ in front of me, their debut physical release (so their debut release), a beautiful double A side featuring We Wander In The Night backed with Rinse And Retreat. And it is beautiful. It’s worth noting that I received this record on the same weekend as I did the Royal Blood album – and there is no comparison. This release screams DIY, from the taken-in-your-garden photo used on the cover down to the raw, honest recordings themselves.

It kicks off with We Wander In The Night which opens the record with your standard Sabbath-esc intro – there’s feedback, there’s some doom, there’s everything you’d expect. But, then something happens, the song twists and turns, it becomes a different beast. Faster, punkier – scratch guitars over stop-start drums. The song pulls you in and runs with you, once it slows it hooks you into the lyrics before hitting you in the face with another belt of guitar noise. And what lyrics. There’s something reassuring in them, they sum up what a lot of young people feel like right now – we just don’t care. The UK political system has bred a disillusioned generation and upon hearing “you can’t govern apathy” uttered amidst grumbling, angry guitar tones, you can really feel it.

There’s a sense of controlled anarchy here, it’s such a brutal sound but it’s tight and locked in. The clean, almost held-back vocals of frontman Jim Beck work nicely to off balance the raw power, with some nice call and respond harmonies from his brother on the skins. Communication is key to their set up, on stage it’s conveyed very well, and it’s absolutely brought their record to life.

As part of their live set, however, I always preferred Rinse And Retreat and on the AAside – it doesn’t disappoint. It’s slightly more accessible, recorded with less haste than the previous track, with more of a Pixies tone to it. There’s a beautiful climax in to what could almost be described as anthemic – “We love our Mother/for giving us life. We love our Father/for giving us eyes”. There’s conviction in this chorus, more of that bond that is apparent in all Cassels recordings.

I think that’s exactly what sets them apart from their two-piece contemporaries (and the rest of London’s toilet circuit, for that matter). When everything is focussed on two members, when the crowd stand in awe of how many amps one guitarist is using in order to sound as BIG as possible – it’s important to remember how to engage. I hark on and on about Wet Nuns – but there was a two-piece who knew how to play together, how write together, sing and banter together.

Perhaps the Cassels brothers have it in them to do something similar.

Cassels can be found on Twitter, Tumblr and Soundcloud

All words by Josh Cooper. More of Josh’s writing on Louder Than War can be found here. You can follow Heavy Leather promotions here.