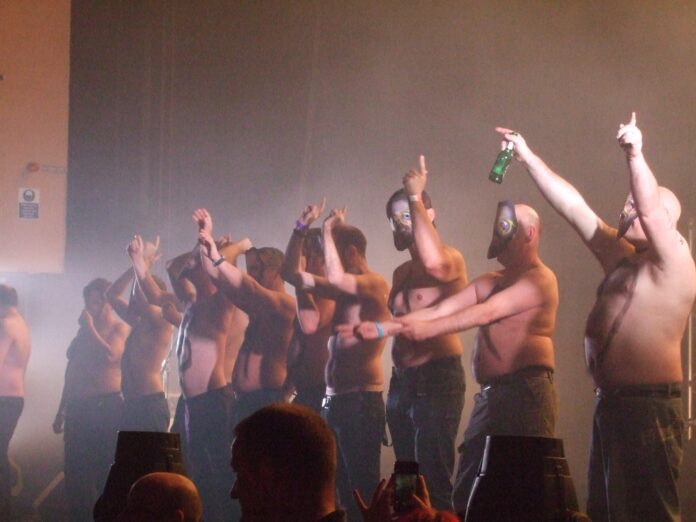 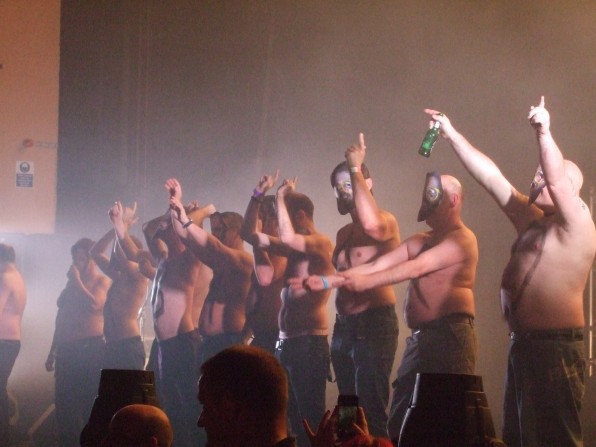 Billed as the Final Comedown, the last ever Carter USM gig, this was an emotional farewell to a much-loved band. Jooles Babey (wife of Louder Than War’s Ged) and mega-fan Tracey Travers McKay report back for Louder Than War.

“I think I’m in paradise. A world where everyone looks out for each other and dances like a f**king maniac. Should I die u will know I died happy. xx “

That was the text I sent to my husband from the loo half-way through the gig. Probably the best gig I’ve ever been to. Carter USM’s final show. Ever. They played for over two hours – twenty six songs, I’m reliably informed. Every song you wanted to hear. And ones I hadn’t heard for ages. It was amazing. Fans had travelled from literally all over the world to be there.

It goes without saying that music wise this was a great night, the best. What made it superb, and what will be my abiding memory of it all, was the crowd. All smiles, friendly, up for a good time, six thousand forty-or-fifty-somethings, united by a love of a unique band, a peoples’ band. It got hectic, but people picked each other up and there was only one solitary knob-end trying to take on the security, who were superb in dealing with the perennial crowd-surfers. There was such a great atmosphere, although tinged with sadness because you knew it was gonna be the last time… Grown men and indeed women did cry.

Next year, my beloved husband Ged Babey will have been writing reviews for 30 years, spending valuable spare time, ignoring my needs in the process; so I thought it was about time I gave it a go, and give him a taste of his own medicine. It’s not as easy as I thought though. Writing this nursing a hellish hangover and coming down from a euphoric evening. (I actually think it’s food poisoning from a fillet of fish burger that had probably been hanging around for a long time, but Ged’s having none of it). Mr B has always been a fair-weather Carter fan and knowing how desperate super-fan Trace was to go asked Louder Than War if we could have his guest pass. (Huge thanks to Guy M).

Carter have strong connections with Southampton and the Joiners, where I used to work for the late Mint Burston. Jim-Bob and Fruitbat kindly played a (secret) memorial gig for Mint, a mild-mannered promoter who they had a lot of time for, down the 120-capacity Joiners, when they had already sold out the Academy six years back. On the night Jim-Bob described Mint as a ‘diamond in the shit’ and played a fabulous show. Carter never forgot their ‘toilet circuit’ roots and made friends and won over fans all over the UK. They personified that late 80′ s era of Indie where underdogs like them made could make it big on their own terms.

Anyway, here we go … the Final Comedown – Brixton Academy is the best big venue I’ve been to, that sloping floor is a stroke of genius. The Frank and Walters, I confess I don’t know a great deal about. I preferred their label mates and fellow countrymen A House. I missed the first part of their set. However, they did a great cover of ‘The Model’.

Next on were The Sultans of Ping, who share the same fan base as Carter and consequently went down a storm. It was their final gig too, so lots of enthusiasm and dancing about. The ubiquitous ‘Where’s Me Jumper?’ closed their set and everyone was well an truly warmed up for Carter.

As ‘You’re the One For Me Fatty’ played over the PA an identity parade of 13 fat bastards filed on stage, letters marker-penned onto their voluptuous bellies spelling out the name of Jon Fat Beast and the chanting started, echoing round and filling the auditorium, drowning out Morrisey. A perfect tribute and weird how such an unsightly spectacle could bring a tear to your eye.

It is hard, for such an evening of near perfection, to isolate key moments, because they were all frankly brilliant. 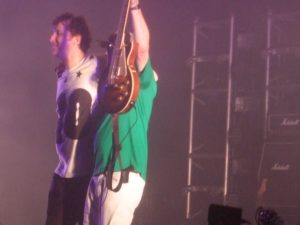 Jim-Bob and “the Fruitbat” ambled onto the stage as if walking to the bus-stop and took up their positions.

“God Bless You Jon” and it was into Surfin’ USM. From thereon in it was a blur of hit after hit, singing and bouncing along.

Carter always put brilliant cover versions on their b-sides; ‘King Rocker’, ‘Tube Station at Midnight’, Shampoo’s ‘Trouble’… but they chose mine and seemingly everyone’s favourite for this occasion. The Pet Shop Boys ‘Rent’ came early on in the set. I always think it works better than the original because, bearing in mind the subject matter, this is how it should be sung!

‘Falling on A Bruise’ was another highlight proving that, puns aside, Jim Bob writes brilliant lyrics with a twist. “If I could do it all again, I’d change everything! everything! everything!”  I had forgotten about songs like that, having listened to the singles CD in the car for the week prior. It’s like Michael Caine’s memorable scene in Little Voice. Low rent and high drama.  It certainly did the job and got the crowd even more onside – if possible.

‘Sheriff Fatman’, ‘Anytime , Anyplace, Anywhere’ became mass sing-alongs with the crowd drowning out Jim-Bob at times. It was an emotional nostalgia trip perhaps but there is no-one around currently that comes close to the way Carter can turn a song about bastard-slum-landlords or alcoholism into a life-affirming bounce-along anthem.

On came a couple of burglars and a gaggle of women in police uniforms to dance along to ‘Glam Rock Cops’, something for the lads after the eye-candy the ladies had with the topless fat bastards.

For a band whose songs reference places in London (Peckham, Tulse Hill, New Cross…)  there seemed to be a hell of a lot of Northerners there. Or maybe it was just they were the most vociferous and friendly.

Keef Bubba, a man who’s been to thousands of gigs and owns hundreds of band t-shirts, said to me “I’ve never ever seen so many people wearing band T-shirts at a gig before”. And so many soaked in sweat and tears.

They came, they saw, they conquered our hearts, the perennial underdogs who dared to dream the impossible dream of being the best band in the UK, and the dream came true. Carter were unstoppable…

This was an unforgettable gig, a really emotional night with so much love in the room, I don’t know how Jim Bob and Fruitbat can possibly give it all up … maybe in a couple of years time … or the 30th Aniversary of 30-Something?

Make sure you also check out our recent interview with Jim Bob and Fruitbat too about this show and what the future holds in store for the band.

Keep up to date for all things here: Carters facebook.

Dedicated to the memory of Mint Burston, Phil Smart, Jon Fat Beast and all the other Carter fans no longer with us.