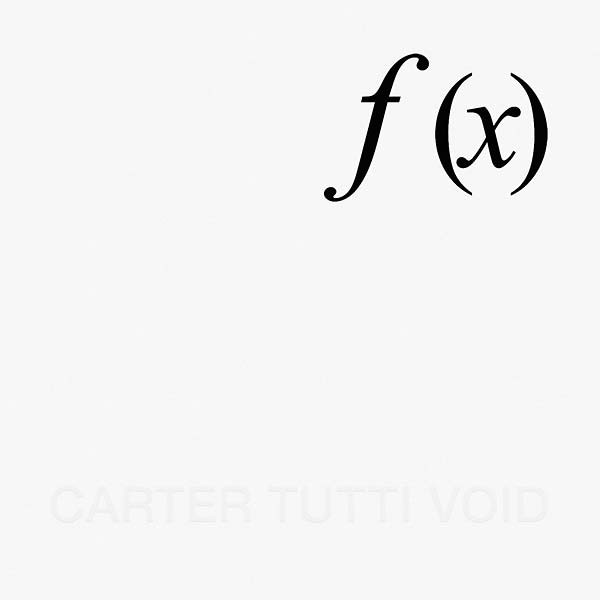 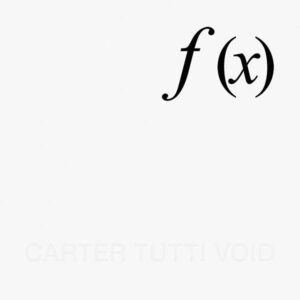 A hymn to the pulse and a worship of the rhythm, the work of Carter Tutti Void has birthed a new form of tribal trance music that was first brought to the world’s attention via the skeleton chrome of 2012s Transverse, an album that bathed in the glory of repetition and distorting truths – and that in the process scared many. Entering the studio to record the follow up, CTV have not only delivered an album that sticks to Transverse’s principles, but now there is added meat on the bone, making f (x) a record that lingers for an age in the mind of the listener.

f (x) is a seductive record that progressively coerces us into its grasp with opener f = (2.4) gently but steadily raising the pulse and opening the senses. The track steadfastly sticks to the rules of music as drug and after a few minutes comes screaming at us, hitting hard as layers of scratched guitars and other assorted instrumentation (it’s impossible to know exactly what’s being played and by whom), a narrative device used throughout the entire record and devastating in its effectiveness.

Just as with Transverse, f (x) has moments that are extremely danceable.  f (2.6) is an alt-funk joy that has the DNA of 80s Chris and Cosey and the (slightly) more commercial friendly sound of Void’s Factory Floor whilst f = (2.2) is pure (death) disco with a more driven and harder thump that threatens you with every added nuance and skittering flourish.

However, with every good story there needs to be a moment where you really feel peril (if there isn’t any then the ending won’t seem so powerful) and that moment occurs deep in the album on f = (2.3). Here is where we land at Conrad’s Heart Of Darkness as the track starts in a similar vein to what’s preceded it before the bass drops out and all that’s left is the indecipherable vocals of Cosey / Void who use their treated voices as a textural device, invoking spirits of those long gone, or that suddenly build up with fear and adrenaline and allow us the courage to conquer our Kurtz.

f (x) is more than just another good album, it is a conduit for thought and imagination. The album is a twisted fantasy that captures the mind and sends it back to times of feverish dreams and hallucinations, a swim in the ocean at night where excitement meets trepidation and where what’s going on underneath is at once worrying but also fascinating.

At times dark, at others exhilarating, f (x) is the output of all our fears and desires.