Home Blogs A Winged Victory For the Sullen: album review 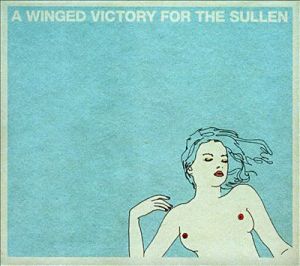 A Winged Victory For the Sullen is the ornately titled project of Adam Wiltzie of Stars of the Lid/ex-Sparklehorse and self-taught American pianist and composer Dustin O’Halloran, who released their first self-titled album in September to great acclaim. The duo also employs the talents of a string quartet, featuring Icelandic cellist Hildur Gudnadottir, as well as labelmate Peter Broderick on violin.

They are named after the celebrated 190 BC white marble sculpture of the Greek goddess Nike, “The Victory of Samothrace”, and it’s tempting to write a review simply by comparing the two.

Throughout the seven pieces on A Winged Victory For the Sullen, there is the grand emotion of triumph, and a sweeping sense of transcendental majesty, like something descending from the sky.

The flowing drapery of the winged goddess, battling against the wind on the prow of a great ship, these are perfect images for the sound of the album.

It is almost as if the elegant piano mood pieces and the slow meditative strokes of the synths and strings are mimicking the graceful balance of the sculpture itself.

Also like the sculpture, there is a mastery of space and movement. As with Eno’s seminal Music For Airports, and the tintinnabulation of Arvo Part much earlier on, it is the articulate silences, the measured rising and falling of musical passages, the deliberate unhurried pace of it all, which makes it so effective.

While ‘Winged Victory’ displays some of the same quietly devastating beauty and symphonic power of Stars of the Lid, the addition of O’Halloran creates an earthier, less spaced out atmosphere and a touch of classical sumptuousness.

O’Halloran has synaesthesia, a neurological condition he has had all his life which allows him to ‘see’ sounds as colours. He has described viewing a Kandinsky exhibition, and being struck at how “musical” the paintings were.

Perhaps this gives him an advantage in composing, adding texture and space as a painter would, with the emotional immediacy of colours as a guide.

Despite the title, the album is a million miles away from sullen, or any of the downbeat navel-gazing gloom that adjective implies.

Consider the way “Steep Hills of Vicodin Tears” swells in an almost unbearably moving surge of joyful strings, the delicate muted piano of “A Symphony Pathetique”, rising in a flourish of astral ambient waves and ethereal loveliness that uplifts the soul. Even “Requiem For the Static King”, a two-part tribute to the troubled Mark Linkous who took his own life in March last year, is just a glorious, gradually evolving crescendo of tremulous beauty which leaves no room for pity or sulkiness.

These are narcoleptic dreamscapes, somnambulant songs at the edge of sleep, music for the mind at it’s most relaxed and uninhibited state…An otherworldly palette of understated electronic loops and washes, mixed with mournful piano sketches – tailor made for moments of positive reflection and peering pensively out of windows.

It has been suggested that the famed statue of Nike’s missing arms and head only enhance her power, so too can be said of the minimalist drones of A Winged Victory For the Sullen, yet both stride on in a grandiose triumph of exquisite artistry and fluidity of motion.

Wiltzie and O’Halloran have without doubt crafted the most sophisticated and romantic record of 2011, which deserves a spot in every ‘best album of the year’ poll.

If you like this, also check out the ambitious double album And Their Refinement of the Decline by Stars of the Lid, as well as O’Halloran’s Lumiere which was released on Fat Cat Records in February this year.