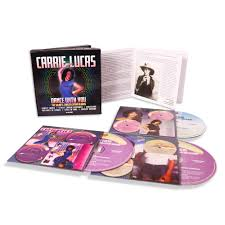 Carrie Lucas: Dance With You

3CD boxset including all the albums Disco diva Carrie Lucas recorded for the Solar and Constellation record labels between 1977 and 1984…..Ian Canty sees the glitterball twirl and gets down to the beat of the groove…..

Solar (Sound Of Los Angeles Records in full) isn’t a label we hear much about these days, but in the late 70s they carved out their own particular niche in the Soul and Disco market of the time. They had a great deal of success in the latter part of the Disco years with bands like the Whispers and Shalamar and later on with both Klymaxx and Midnight Star too. Carrie Lucas was there from the very beginning, when the label was originally called Soul Train Records, named after the TV show with which it was entwined.

It wasn’t by chance that Carrie came to be on the label – her husband Dick Griffey founded it along with Soul Train mastermind Don Cornelius. Coming at it from a different angle than most Soul/Disco performers, Lucas’ background in choir singing led to her performing at the Monterey Jazz Festival with her school. Working in day jobs but dreaming of a singing career, she got to know Pete Moore of Smokey Robinson’s Miracles and the aforementioned Dick Griffey, which led to her break as a recording artist.

On Carrie’s debut album, which came out on Soul Train Records in 1977 before the changeover to the Solar name, sometimes she doesn’t get to do that much. Like the basic chant of her near-hit I Gotta Keep Dancin’, where she only really gets to sing the title and a few scant verses in a laidback, sing-speak style, something that was somewhat at odds with her vocal ability. It does work though, making her sound like the Disco everywoman stepping up from the dancefloor and onto the mic, albeit though that the song that made her name was a little repetitive and not really representative of her talent. Elsewhere she gets full rein to run with the style that more reflected her Jazz/Soul roots, particularly on the three part Tender (preceded by an instrumental Interlude and followed by Jammin’ Tenderly), where she gets to truly display her abilities with a nice creamy ballad.

Street Corner Symphony, despite a spirited title track which dips into some R&B and Doo Wop numbers like some kind of proto-Stars On 45, wasn’t as good. Having said that the daffy and carefree sounding The Edge Of The Night is delightful, but there is a tendency to MOR/Easy Listening more often than not. The final, brief “music box” number Reflections does give Carrie a bit of a chance to shine vocally though.

1979’s In Danceland was a big improvement. The title and the sleeve photo, which shows Carrie in the process of “getting down” was a statement of intent that is followed up by the opening title track, a smooth and entrancing invite to shake one’s booty. The sound of this record recalls classic Philly, updated for the late 70s. Even the slower numbers like I’m Gonna Make You Happy have a real drive and purpose to them and the fast songs have the rawness of Funk melded to Disco smoothness. The best track for me is Are You Dancing, another near hit (70 on the US chart) which comes complete with a great drop out section that has some prime R&B fuzz guitar and even what sounds like some early Hip Hop scratching! The whole album is high quality and my favourite of the whole set.

Carrie was cracking out albums at a fearsome pace and it was only another year to wait until the Portrait Of Carrie LP was ready to roll. My extremely poor Kenneth Williams impersonation was let loose on hearing the very cheeky but groovy It’s Not What You Got, It’s How You Use It and Career Girl has a cool message of female empowerment, quite important too at a time when Funk was mostly a man’s world. Though mostly good stuff, this LP loses a few points for me on a couple of pretty but ordinary ballads (one of which was Just A Memory, a duet with the Whispers who were having a great deal of success around the time with And The Beat Goes On) and including the three year old Keep Smilin’ (the I Gotta Keep Dancin’ 12″ mix) to bump up the running time.

After an album a year since 77 Lucas didn’t release a new record until 1982 with Still In Love. Things had changed a fair bit in Dance Music in the intervening months, with Hip Hop making a big splash and Disco more or less a dead duck as harder rhythms were sought for the dancefloor. Carrie had moved with the changing times, with the Electro Funk of Show Me Where You’re Coming From somewhat reminiscent of labelmates Shalamar, who were on a roll at the time. Actually Lucas’ biggest selling album, it was a solid enough collection boosted by some great singing from the lady herself, particularly on I Just Can’t Do Without Your Love.

Another couple of years had elapsed before the final album here, the strangely titled Horsin’ Around (sounds more like a Nightingales album title to me), emerged. Lucas had kept pace sonically with a very modern sound, but unfortunately despite the playing, arrangements and singing being predictably spot on, this one lacked truly memorable songs. The best tracks were the futuristic Funk/throwback to her 1977 days Let’s Keep Dancing and a lovely ballad in Somebody Said. The LP didn’t reach the national charts and as a result it was Carrie’s last recording of the era. Over time the Solar sound came into fashion and was widely sampled and used as breakbeats. However nothing much was heard from Carrie Lucas until 2018 when she returned in May with the single Some Things Never Change.

Carrie Lucas Dance With Me – the Solar and Constellation Albums is very much a nostalgic glimpse back to the carefree days of Disco and following that line through to the Electro dance of the 80s. Though never a big star, Lucas penned a fair amount of her own material and on tracks like Career Girl offered a bit more lyrically than the usual Disco clichés. Probably a collection more for the confirmed Disco/Funk fan, but a good amount to recommend about it, particularly the Danceland album which was Carrie’s finest (just over) half hour. That was a record that could go up with 1979’s best floor-fillers and Carrie Lucas can consider herself pretty unlucky not to have struck big with it.