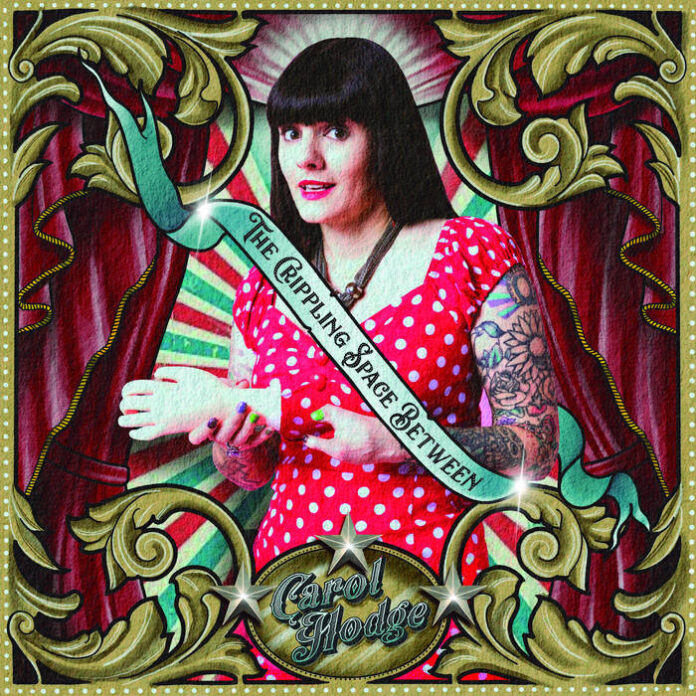 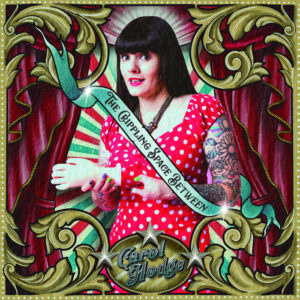 The Crippling Space Between

Carol Hodge returns with a third album that is strong and a grand leap forward into the mainstream which by rights she should own by now. Wayne AF Carey documents the rise of the star from Yorkshire…

Carol is no stranger to the music scene due to being the keyboard sound behind Steve Ignorant’s Slice Of Life / Crass and guesting with Ginger Wildheart, Headsticks and The Membranes. Produced by Dave Draper (Jazmin Bean, The Wildhearts, The Professionals), The Crippling Space Between is an unashamed exploration of the emotional rollercoaster that was 2020. Carol flits between musical styles, bridging the gaps with her astute lyricism. A fierce believer in remaining independent, the album will be released on Carol’s own label Midnight Stamp. Previous albums Savage Purge (2020) and Hold On To That Flame (2018) featured on several Top Album end-of-year lists, and 2020 single Stopped Believing In You received significant indie and online radio play, including from BBC Manchester and BBC Bristol. I speak to Carol and get a track by track rundown with myself describing each track from my perspective.

The Moan Of A Thousand Years

“My brain is not my friend. I’m aware that my default is to observe the negative. This rubs off on other people, if i’m not careful. Everything I need, in order to be more positive, and more happy, is already here. I just need to shift the focus and always see the humour. I wanted this opening track to be rousing and to set the dramatic tone for the rest of the album.”

This track goes into classic rock territory with a rousing chorus that comes back to a chugging riff and those soaring vocals backed with some great harmony.

“Always waiting for things to get better, for the perfect time, but it doesn’t exist. Change is gradual, one day a time. Progress has been made, if you take the time to stop and look back, you’ll see it. Hooky backing vocals, behind the beat drums and ambient piano are the poppy keys to this track.”

This is Carol at her best. A spine chilling thing of beauty that shits all over the bland nonsense that has had loads of money thrown at it. A simple keyboard lament that pulls the heart strings. And no, that’s not Hooky on vocals unless he’s wearing really tight strides…

“An artist is what I need to be. My urge to create lies beyond ego, it is innate. The Arts have been sidelined while the government rescues the economy. This is shortsighted, and fiscally-oriented, as ever. The grassroots have been left to die. I picture performing this, alone, in a crumbling theatre. I hope this image doesn’t come to pass.”

Another great bit of keyboard styles and a stark song about our small scene being destroyed during lockdowns. It looks like we may have survived yet these lyrics show the fear we all felt when the venues closed and were on the verge of collapse. Heart wrenching stuff.

Everything Here Is A Joke

“I’m still getting to grips with my own mental health.  Still expecting a magic bullet to arrive, still feeling desperate.  Thinking too much, planning too much, instead of living in the moment. Let someone who loves you, help you. The present is mundane, so it’s normal to want to escape it. But always hold on to it, as it’s all there is. Musically, this is a mash up of two very different styles, like Duran Duran being pulled back to the 1920s.”

This so reminds me of the music on things like Miami Vice and Baywatch back in the 80’s and 90’s which isn’t a bad thing when Carol twists it into her own shape with THAT voice. It is a mash up that somehow works but also sounds a bit cheesy in parts.

So Much For Summertime

“Hang on in there, life is on pause at the moment. It’s frustrating, as there is very little we can do. It’s fine to feel frustrated and disappointed. Let those feelings exist. I wanted this song to feel like a triumph over adversity, with a good dollop of sarcasm on the side.”

An ambitious piece of songwriting that sounds grandeur and has that clever humour that comes out in the lyrics aired on her previous albums. Massive hit potential that Brit School graduates would kill for.

Best Thing In This Town

“A song about loss.”

Stripped down and bare, an emotional piece that’s haunting and beautiful in equal parts. She hits the high notes and hits your heart with another dose of splendid keyboards and shimmering effects that chill out like fuck.

“2020 was a challenging year. My default mode, as with many people, is to control scenarios, the future, other people. Control was taken out of our hands. This is a song in 3 Acts, like life. Need to take life one day at a time, accept life on life’s terms. If 1970s Queen were to write a lockdown anthem, it might sound a little something like this.”

A great track that’s probably the most commercial thing Carol has done yet. A journey into rock opera territory that has slivers of Muse and even Evenescence running through it, especially with the guitar rushes that build into a bit of a maelstrom after the first and last chorus. A bit of everything for everyone here. The Hodge in a bit of rock mode.

“Always hang on in there, as the winds will change. This song is all about hope and the vocal harmonies. I kind of wanted it to have the feel of a hymn, sung by a choir. I once went miles out into the sea on a lifeboat with Steve (Ignorant) and it made me realise how eerily lonesome it is once you get away from the shore. This experience was in the back of my mind when I wrote this one.”

This is the Lou Reed / Nick Cave moment on the album. Imagine being stuck on a boat with Steve Ignorant! Now that’s a few stories you could tell… Like the stuff Slice Of Life can pen it’s a cracking song of hope that lifts you up when things are getting on top. I’m loving the harmonies on this that just add to the whole sound.

Scream Of The Sea

Another slow-builder that makes you happy. A proper 80’s feel again and a stab at the mainstream with a lot of scope. Just writing a song about her reading of the insights of Bob Mould makes you want to listen. Sounds fuck all like Husker Du mind…

Along For The Ride

“Take risks with life and love. It’s all just a ride, and you can handle it, and learn from it. There are no rehearsals. Enjoy the irony of it all. It’s a break up song, with zero regrets. I like the lyric: As I hold my breath and crumble / while you slowly dance away / my heart feels like a bread knife’s peeled it open for the world to hate.”

Keyboard led and insanely catchy as fuck. It’s like a slice of Country that goes all Taylor Swift and Miley, yet it’s Carol at her best with her insightful lyrics and THAT voice hitting the heights in the right places. The Country fans over the pond would make her a millionaire with this one.

An Eye For An Eye

“I love you. Trust me. We’ll be ok if we look out for each other. We all suffer. It could always be worse. Rage and retribution are not the answer. Oh how we think we are the only ones who suffer, blinded by our own terminal uniqueness. A song to sink into and drift off to as the stylus slips off the grooves.”

A real mellow piece of soothing song writing that ends the album on a high note. Vocals of perfection and some great little touches of echoing guitar reeling around that smooth yet commanding voice.

Carol Hodge should be massive by now. Three albums in, a life of turmoil and emotions that she’s told to fuck off. Riding through the storm with her sarcastic yet personal lyrics to a soundtrack of pure bliss. This young woman from Yorkshire is not going away until people finally listen. Read on major labels. An independent woman who should be walking out at awards ceremonies clasping those insignificant pieces of metal that are chucked in a cupboard by these money grabbing moguls. Controversial? What the fuck does that mean nowadays?