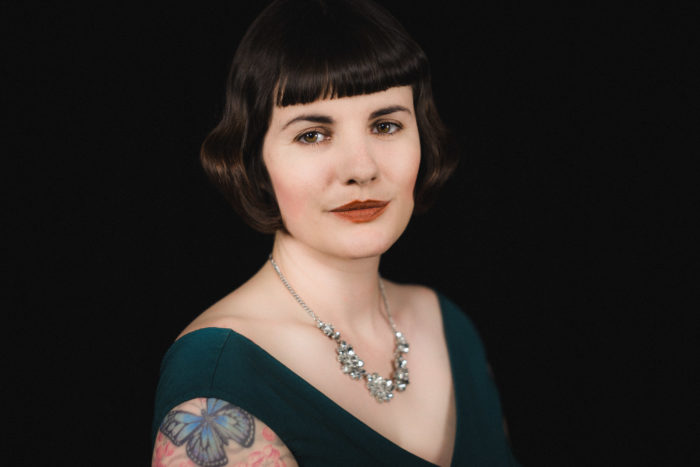 If Carol Hodge stopped hanging around with old anarchist punk singers she could be a hugely successful mainstream soul singer, only she’s a bit to sussed for that… she’s the Adele for people into radical politics -said another Louder Than War writer… Sophie Sparham talks to Carol Hodge.

Singer-songwriter Carol Hodge has an impressive resume when it comes to bands. Well known in the Manchester music scene, she has played in WRECKS, Bad Taste Barbie’s and is currently a keyboardist for Steve Ignorant’s Slice of Life.

As a solo artist, Carol is known for her powerful voice, and brilliant skill behind a keyboard. Her songs are passionate and catchy, moving yet poignant. Recently, she has just release her new album, Hold On To That Flame.  Sophie Sparham interviews her about the inspiration behind the tracks, Nick Cave and where she is in her career today.

You released ‘I am a Sample’ back in 2016, after the ‘Mess Ephemera’ personalised recording project in 2015. When did the process for this new album start?

It’s been quite a long time in the works. I kind of had an album ready to go in the summer of 2015 then life happened and everything got thrown up in the air and changed. There’s been a lot of disruption that has led me now to be in a place to get it done. I’ve ended up with a different album to the one that I originally intended. There are a few of the same songs, but a lot have been written based on the new experiences I’ve had over the past year or so.

Yes, I’ve noticed quite a few new ones, such as ‘First World Problems’ and the last two songs on the album are tracks that I haven’t heard before.

Yes, ‘First World Problems’ was written around two months ago and other new ones include ‘Your Heart is Breaking’ and ‘Bear with Me’ which are very new. There’s some old classics on there too, I say that as if I’m an established artist! Songs such as ‘Weather the Storm’ and ‘The Witch is Dead’, which were written a few years ago. One benefit of having disruption and heart ache is that you can get some good songs out of it!

It was great to hear ‘Stop the World in its Tracks’ and other songs you play live having a fuller sound.

That’s all Dave Draper’s doing. He produced the album. I recorded piano and vocals in a separate studio and then went into his studio and we produced the songs together. He added drums, bass and guitars and I did a few other bits such as backing vocals, synths and a bit of cello. It was an organic process. I did worry about it not working, as it was quite an intense set up, and it was the first time Dave and I had worked together in that capacity, but I’m genuinely so happy with how it’s turned out. I don’t recall saying that about my other recordings before. It’s an album I’m happy with and as an artist that’s really important for me.

That’s a massive achievement as an artist, so many people write things then aren’t happy with them or think they sound wrong.

Yes, it’s so easy to write something then over analyse and overthink it or have massive deliberation over small details. I feel like I’ve moved on from that place and it’s a really nice feeling. The last few years I’ve mainly played music for other people in bands (Steve Ignorant’s Slice Of Life, Ryan Hamilton And The Traitors, Ginger Wildheart, The Membranes, Simon Wells) and haven’t spent a lot of time on my own music. It’s nice that now I’ve returned to it, I feel that it’s worthwhile, rather than thinking it’s clunky or worrying that I played a piano line ‘wrong’.

If you’re an artist of any sort you’ll probably have perfectionist tendencies. You could work on a song for ten years and still not be happy. I’ve finally got to that point where I can say that’s enough, not that’ll do, but that’s enough. I’ve done it.

I’ve grown as a musician and as a person. It comes with age and experience. I’ve realised it’s not the end of the world if the tracks aren’t in the right order, or a lyric isn’t several fathoms deep. I understand my place in the world a little better now: something that I would have spent hours worrying over, most people won’t actually notice or care.

‘Hold On To That Flame’ is a great album title.

The title is part of a quote from the Nick Cave film 20,000 Days On Earth. The full quote reads:

“All of our days are numbered; we cannot afford to be idle. To act on a bad idea is better than to not act at all because the worth of the idea never becomes apparent until you do it. Sometimes this idea can be the smallest thing in the world, a little flame that you hunch over and cup with your hand and pray will not be extinguished by all the storm that howls about it. If you can hold on to that flame great things can be constructed around it that are massive and powerful and world changing – all held up by the tiniest of ideas.”

It’s really emotional for me to revisit that entire quote. The film hit me like a ton of bricks when I saw it at the cinema. My inner voice screamed at me: “Stop doubting yourself, stop thinking you’re not good enough, stop overthinking absolutely everything. Nothing got achieved by people who just talk about things, you’ve just got to be brave enough to put it out there.” I think as woman, and as a non-­‐conventional woman, with a disability, this has provided me with excuses for inaction.

The album title is ambiguous on purpose, it means many things. Hold onto yourself as a person while life gets turbulent around you. It’s also about elements of loves and relationships and holding onto love. And just doing things, being that little flame and keeping burning, because you can help spark much greater things.

And sometimes you need to just do things, or nothing gets done at all.

Exactly and I’m putting the album out on my own record label that I started last year. If people are interested in working with me, they can come to me. I’m very open to assistance and support, but I am now at the point where I won’t beg or chase anymore. This is very much a labour of love.

Sometimes I forget I’ve been doing this for twenty years. I’ve learnt a lot about song writing and about being a musician. This album reflects where I am in that process. The process hasn’t stopped, I’m keen to improve. My ‘day job’ is teaching piano and singing and it constantly challenges me to improve my own skills and knowledge. The fact that music is my job is the best thing ever, and I am incredibly grateful. Being able to help other people and share your love and skills for music is just amazing.

And it’s amazing to teach as you have to keep pushing yourself and be the best that you can be for your students.

You’re right, it’s about being the best I can be, not about being the best. When I was younger I was very egotistical. It was all about “look at me look at what I can do!” Now I look back, I see that came from a place of anxiety and of fearing that I wasn’t good enough. It’s an important journey to make as a musician to realise that it’s not about showing off but about serving the song. The songs that are on this album are about having a clear message, not about me flexing my technical ability.

You sing about politics and heartbreak, but there’s a lot of hope in your music.

That’s what I’m like a as a person, a relentless optimist, which can lead to a lot of pain in life! As for the political aspect, it’s important to be upset and angry with the state of the world but it’s equally important not to let it consume you. To battle against it but focus on the positive and the bigger picture. Life is about the small things you can do day to day, and learning to be happy with that.

I’ve got better at giving people hope in my song writing. My last solo album, released under Crystal Grenade, was very dark, bleak and gothic, which is where I was at the time. It was all about focusing on the darkness and expressing the angst, but without a real counterpoint to it.

There is still a bleakness and a depressive element to my music but I think I’ve got better at having a positive counterpoint to it. You’ve got to think of the listeners and I want to take them on a journey, like anyone with an album does, and provide just enough light for people to listen and feel satisfied at the end.

So you’ve got the tour and release date all to come then?

The dilemma about being an independent musician in 2018 is just not knowing how to go about releasing things. All the old rules are out the window. If you’re doing it yourself, get it out there as quickly as possible, but on a practical level I can’t afford to press the CDs at this time. I’ve addressed this issue by offering pre-­‐orders on my website and have included some ‘premium bundles’ involving personalised recordings, lyric art and t-­‐shirts. I’m very much of the Amanda Palmer school of thought – if people want to help, then let them.

Being an independent musician in this day and age is difficult. When I started in nineties, it was the back end of the music industry boom. I was gigging in a small town in Cumbria and there would be A and R people from London coming to watch us. The amount of money that was available is completely unheard of today.

I got an idea in my head that I had to act bigger than I actually was. There’s still this voice in my head saying “you’ve got to dupe people to get them on board” when in reality I know that isn’t the case. I’m not interested in playing any games.

One of my strengths is I’m honest and forthcoming. I’m really not trying to be something I’m not. If you like what you hear, then wonderful. If you don’t, then you’re in the wrong place!