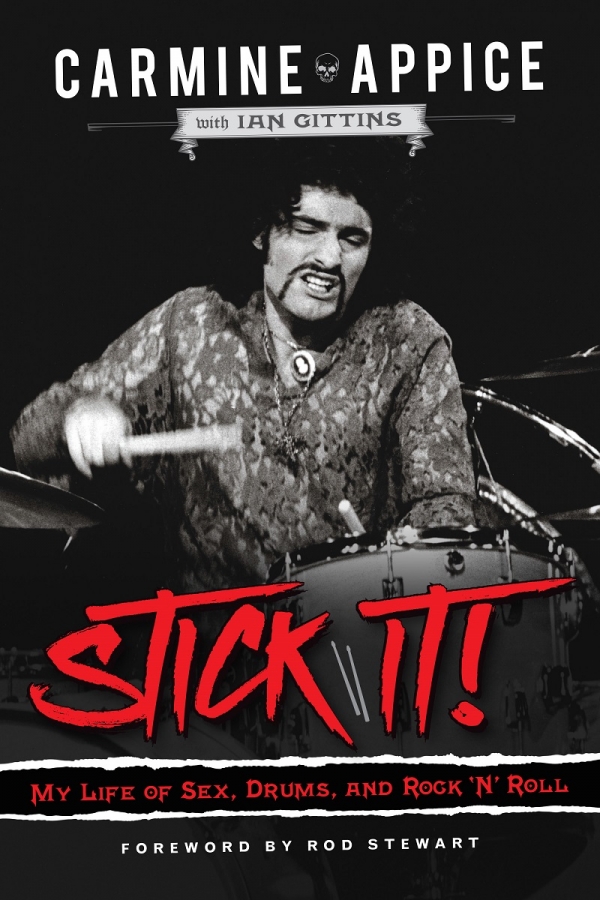 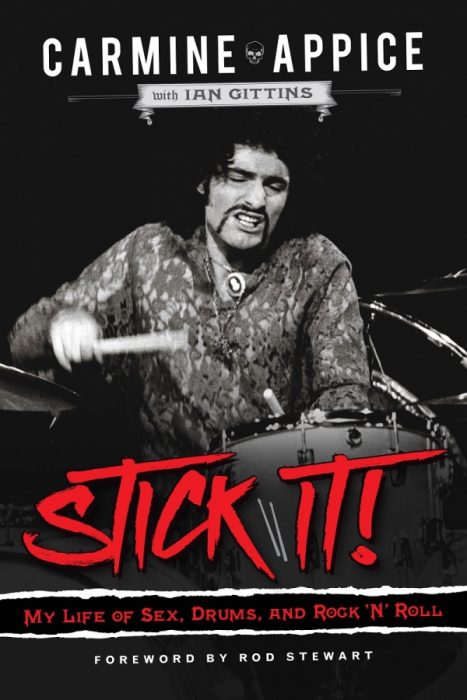 Carmine Appice: Stick It! My Life Of Sex, Drums, And Rock ‘N’ Roll

Jamie Havlin takes a look at the biography of hedonistic rock legend Carmine Appice, whose CV includes drumming with Vanilla Fudge and stints playing with Rod Stewart and Ozzy Osbourne.

On page one of this biography, Carmine Appice boasts about his drum solo on Ozzy Osbourne’s 1984 Bark at the Moon tour. ‘The whole set was genuinely spectacular,’ he writes, ‘but I was pretty sure my jaw-dropping special effects halfway through the set topped it all.’ A few pages later he’s complaining about Sharon Osbourne’s ban on groupie’s backstage.

I suspected that I really might dislike Stick It!

Luckily things improved as he moved backwards to his early days of mischief making in Brooklyn and, as he zigzags across the streets of that borough with cops in hot pursuit, inevitably I began thinking of some of Martin Scorcese movies. By coincidence, a certain Henry Hill soon appears, selling Carmine a Revox tape machine. Henry Hill you may remember is the guy played by Ray Liotta in Goodfellas. Fortunately, Carmine Appice always wanted to be a drummer rather than a gangster.

This book comes with a Parental Advisory Explicit Contents label on its cover and Appice and co-author Ian Gittins (who helped Nikki Sixx with The Heroin Diaries) certainly earn it, refusing to skimp on the ludicrous levels of debauchery that the drummer was happy to indulge in. To borrow the tagline of the film From Dusk Till Dawn, Appice often appears to be on a mission to see ‘How Far can too Far go?’

This isn’t a sentence I would disagree with.

Anyone planning on keeping a mental note of the number of times a line like ‘I met a gorgeous chick with huge tits’ crops up will very quickly lose their count. And if you’re counting the amount of times Carmine and his buddies wreck a hotel room, it may be patience that you’ll soon lose.

Much as I find the idea of throwing TVs out of windows moronic, this is far from the worst behaviour outlined here. There are a couple of incidents that he witnessed but didn’t directly participate in. One involves some of the young Appice’s fellow gang members and three Puerto Rican girls on Coney Island. And then he goes into great detail about the infamous Led Zeppelin mud shark incident which he had a ringside seat for.

I found these pages deeply repellent reading at best albeit Appice is at least honest enough to include them. This really is a warts and all memoir.

There are, though, a number of more entertaining anecdotes. Meeting a young guitarist from Seattle calling himself Jimmy James in a New York hooker’s apartment and later touring together with the man who became better known as Jimi Hendrix and being one of the first people to hear Electric Ladyland in Jimi’s hotel room in Seattle.

Then there’s his introduction to the aforementioned Led Zep when that band supported Vanilla Fudge at the Denver Auditorium in 1968. ‘There were about 7,500 people at our sold-out show, and a few pockets of fans were booing them and chanting, “Bring on the Fudge!” ‘ Afterwards, Appice felt obliged to advise Robert Plant that he should move around a bit more onstage.

Appice also demonstrates a self-deprecating sense of humour on occasion. Talking about the second Vanilla Fudge album, he admits: ‘Even listening to it now – which, let me tell you, I rarely fucking do – The Beat Goes On sounds like an album that Spinal Tap would be wary of making.’

Supergroup Beck, Bogert & Appice follows on from Cactus and then there’s a successful stint playing with Rod Stewart at the height of that singer’s fame. Stewart also provides a foreword too where he has a go at Appice’s fashion sense, which according to Rod is ‘absolutely hopeless’. Coming from a man who, over the years, has happily worn spandex, feather boas and leopard skin leggings, I dread to think what kind of clobber the drummer deemed suitable for shows.

After being fired from Stewart’s band, the biography begins to suffer from a glut of celebrity name-dropping, as Appice moves almost aimlessly from one band to another, one wife to another while, of course, adding to his sky high count of groupie conquests. Around 4,500 if you’re interested.

The final chapter, though, is possibly the most interesting in the entire book. And there is a surprise in store for readers, which if you don’t want to know, I would urge you to avoid reading the final paragraph of this review.

Ruminating on his own behaviour, Appice isn’t completely apologetic about his past but he does admit: ‘I think back on memories of pulling down girls’ tops backstage at gigs or sitting on the side of a bed laughing while they had a thrashing mud shark pushed inside them, I wince and feel ashamed.’

And here’s that surprise – amazingly enough, Appice is now in a very steady relationship. And he hasn’t cheated once in the thirteen years of his time with his new partner.

For more on the book visit the Omnibus Press website.