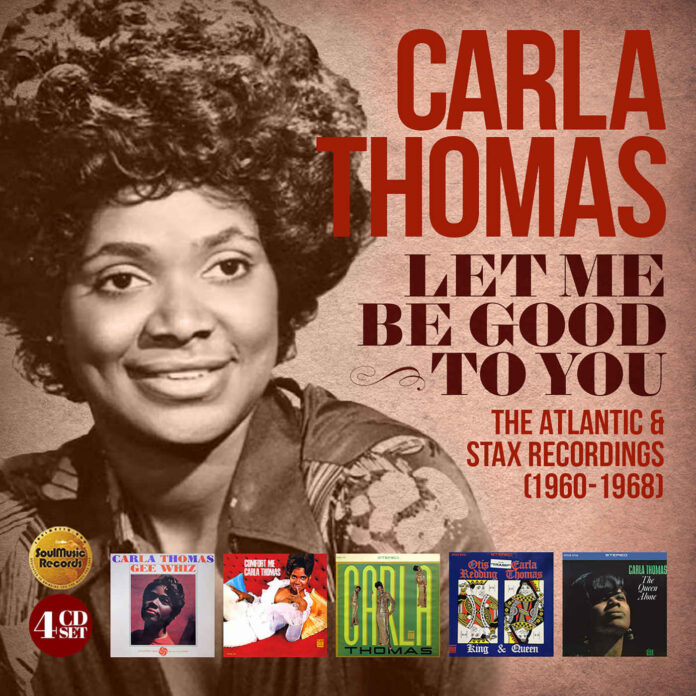 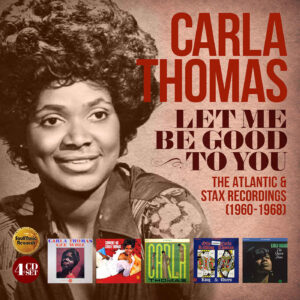 Let Me Be Good To You

Subtitled The Atlantic/Stax Recordings 1960-1968, this 3CD set brings together the best of “The First Lady Of Stax” including her 1967 Kings & Queens duet album cut with the legendary Otis Redding…LTW’s Ian Canty sees talent running in the family…

As far as being “born with music in your blood” goes, you would have to go a long way to better the credentials of Carla Venita Thomas. She was the middle child of Lorene and Rufus Thomas, the famous blues singer/entertainer, who had been involved travelling musical revues since the 1930s. At the time of Carla’s birth, the family lived just a stone’s throw away from Rufus’ place of work, the Palace Theatre in Memphis where he was Master Of Ceremonies. Rufus had a variety of strings to his bow, including as a jive talking DJ on the radio with a following of his own among both black and white audiences.

It was no surprise that young Carla wanted to follow in her father’s footsteps and at the age of 10 she joined her first vocal group the Teen Town Singers (founded by local radio personality A.C. Williams). This was despite being some years off being a teenager at the time and she performed on weekends to work around her schooling. After completing her studies, she began her professional recording career in earnest at the age of 17 with a duet with her dad called Cause I Love You. This single was released on Stax’s precursor Satellite Records and though not a hit, was crucial in that the larger Atlantic label picked up on it. This in turn lead to Stax being adopted by Atlantic, with Miss Thomas moving over to the main label.

It is also the first track on this new 3CD set, Let Me Be Good To You. Although the link up with her father was perfectly fine and the song a full-bodied bluesy duet which ably demonstrated Carla’s blossoming talent, she needed to stretch out on her own away from pop’s shadow. She accomplished just this with her next single, the self-penned Gee Whiz (Look At His Eyes), which reached the top ten of both the r&b and pop charts in the US. A slow burning success that was originally rejected as a single, the Atlantic A&R Department finally got behind a song which was written by Carla when she was only 15 years old. An excellently arranged, sweetly sentimental r&B heartbreaker, the record had the dual effect of setting her off on a successful solo career and also doing a lot to establish soul music in America as a chart force.

Follow up, A Love Of My Own, may have slightly over-egged the pudding, perhaps going to far towards pop with that eerie “massed choral” backing vocal style that was in vogue at the time. Nevertheless it was still a minor hit and though Carla would never have a record as big as her first solo single, she would regularly chart all through the 1960s and do a great deal to solidify Stax and indeed soul music’s profile during the decade.

The remainder of this first disc takes in more Rufus duets, some hit and some miss singles and tracks from the Gee Whiz debut LP. She’s credited as “Friend” when pairing up with Rufus on the touching I Didn’t Believe and Promises, which has an entrancing exotic beat that was wasted as just a b-side to A Love Of My Own, which I preferred it to. A jolly, skipping rhythm to Fools Fall In Love sets Carla up for the usual perfectly rendered vocal performance and The Love We Shared benefits hugely from a more restrained production, with a neat tinge of country soul to this number. I Can’t Take It is another flip side of quality, a really lively performance with good guitar stabs and that golden voice. This disc finishes with two Christmas novelty tracks, All I Want For Christmas Is You (not the Mariah Carey song) and Gee Whiz, It’s Christmas, which are both a great deal of fun.

By the start of Every Ounce Of Strength (the subtitle to disc two) we’ve reached 1964, when Carla was firmly ensconced as “The Queen Of Memphis Soul”. This section kicks off with the blues-harp wailing b side, Night Time Is The Right Time, where Carla teams up with her dad again to good effect. That’s Really Something Good, the top side of the disc, has a really infectious beat just made for northern soul dances and even nibbled the lower end of the US charts.

In 1966 Carla very nearly bettered the chart performance of Gee Whiz. Recording the definitive version of the Isaac Hayes/David Porter tune B-A-B-Y (though the Rachel Sweet cover for Stiff in 1978 may be more familiar in UK), with which she managed to reach the top three of the r&b charts and number 14 on Billboard. This was a deserved hit for a superb rendition, which launched her right back into the spotlight four years after her initial breakthrough.

The excellent horns-led r&b ballad A Woman’s Love shows Carla’s vocal power in all its glory. She never overdoes things, always knowing exactly when to emote and when not to, making it all the more effective due to not “going to the well” too often. Comfort Me album track Move On Drifter builds in a cool manner with an appealing guitar hook that helps a great torch song along and the jazz touches on the LP’s title track are neat too. The 50s pop/doo wop vocal stylings on Forever combine nicely and another couple of energetic duets with Rufus in Birds & Bees and Never Let You Go, plus that great version of B-A-B-Y, make for a satisfying climax to this disc.

A solid rhythm & blues strut Red Rooster introduces us to disc 3 of the set and the following I Got You, Boy is a joyful soul pop nugget. However, the main point of interest on this platter is probably its second half. This is given over to the King & Queen album, a series of duets which paired Carla with Otis Redding. This really was a great combination that also resulted in three popular singles Tramp, Knock On Wood and Lovey Dovey. The LP is presented here with a slight adjusted running order.

The double act draws the humour and emotion out of the songs with ease, possibly best exemplified on a cracking version of Tramp, which also did well as a single. Are You Lonely For Me Baby is a lovely, loose groove, but to be honest everything works a dream. A classy offering and you really get the feeling that Otis and Carla thoroughly enjoyed making it too.

The final part of this boxset kicks off with five live tracks from the Stax/Volts Revue European tour. It is great to have these, as they prove Carla was as at home onstage as she was in the studio, full of drive, energy and direction, a singer who was a true leader. She smashes through her hits with real purpose, plus lively cuts of I’ve Got My Mojo Working, Let Me Be Good To You and a cover of Yesterday.

The studio sides include an elegant Any Day Now and a belting Stop Thief (another Hayes/Porter effort, but with assistance from Joe Shamwell this time round). I Take It To My Baby utilises an infectious, odd rhythm attack and the haunting All I See Is You is a real gem, strings and guitar playing great parts with Carla in beguiling form. The boxset ends with a real soul tearjerker in I Want You Back.

After parting ways with the ailing Stax label in 1973 and with little success after the 1960s was over, Carla retreated from the music scene. She still performed live, but studio sessions were rarely undertaken. Often though, she could be cajoled onto stage when soul singers played in her hometown of Memphis and no doubt performed with the kind of excellence that made her name. It is a shame that she didn’t record more, it would be interesting to hear what she could have come up with in the funk and disco eras for instance. But we should give thanks that she did complete a body of work of such quality that is contained here. The sleeve booklet notes that Aretha and Dionne Warwick had lengthier careers, but in her prime, Carla Thomas was hard to beat.

I love Carla’s voice – even on the odd occasion when the material or accompaniment weren’t quite out of the top draw (perhaps on one of the few of the standard soul ballads Give Me Enough), her finely deployed, but powerful and passionate vocals usually make things work. Let Me Be Good To You shows you exactly why people called her “The First Lady Of Stax” and “The Queen Of Memphis Soul”. They were spot on and the proof is here that she still reigns supreme.