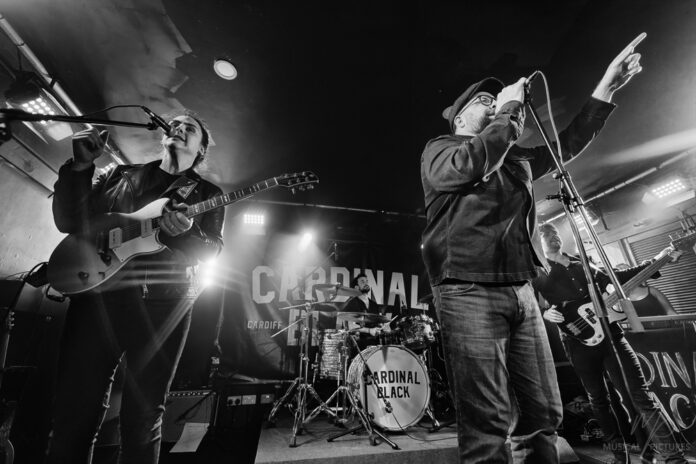 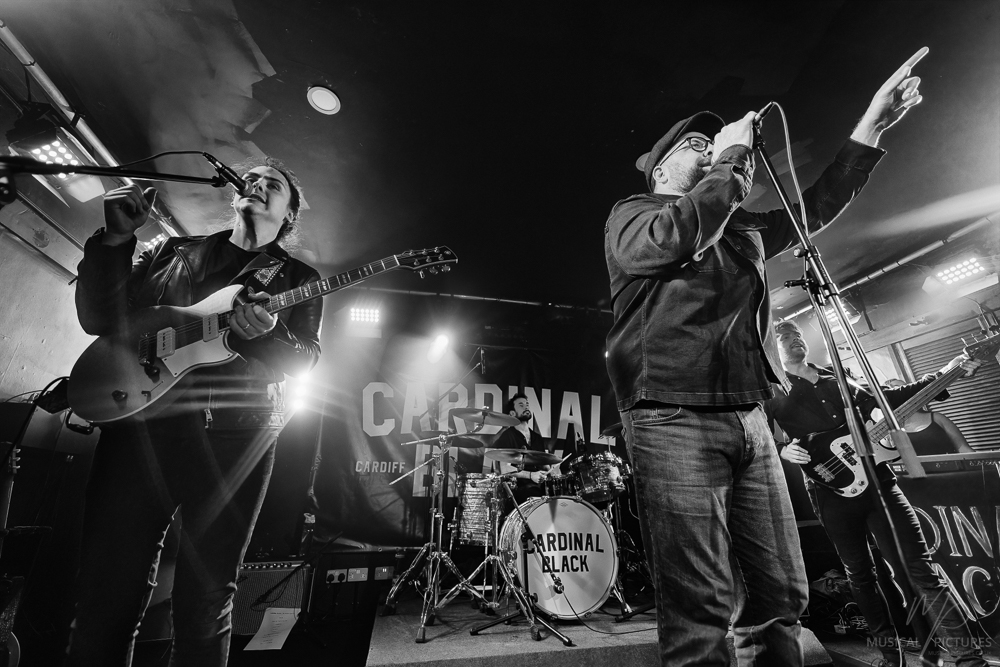 New alt-rock band from the valleys, Cardinal Black, have amassed a significant following to this point, despite never playing a headline gig. Simon Reed heads west to check out their first. Do they live up to the hype?

I think we can all agree that Covid having a grip on the world has been somewhat crap. The Omicron variant may be at risk of cocking-up 25/12, but in the spirit of Christmas, I’m trying to find positives. Lockdown gave me an important opportunity to watch every episode of Breaking Bad for the fifth time. A significant proportion of the population proved what they already knew: that it’s perfectly possible to go to work, without actually going to work. And ten years after the conclusion of an ultimately faltering step into the music business, three Welsh musicians rekindled their ambitions and reformed a band.

The musicians are Tom Hollister (vocals), Chris Buck (guitar) and Adam Roberts (drums). The collective is Cardinal Black. The only thing missing was a bass player. In 2020, Sam Williams was recruited to deliver the low end and the band were set. Debut single Tell Me How It Feels landed in May 2021 and made an impressive and immediate impact, knocking Noel Gallagher off the top of the iTunes rock singles chart within 24 hours of arrival. 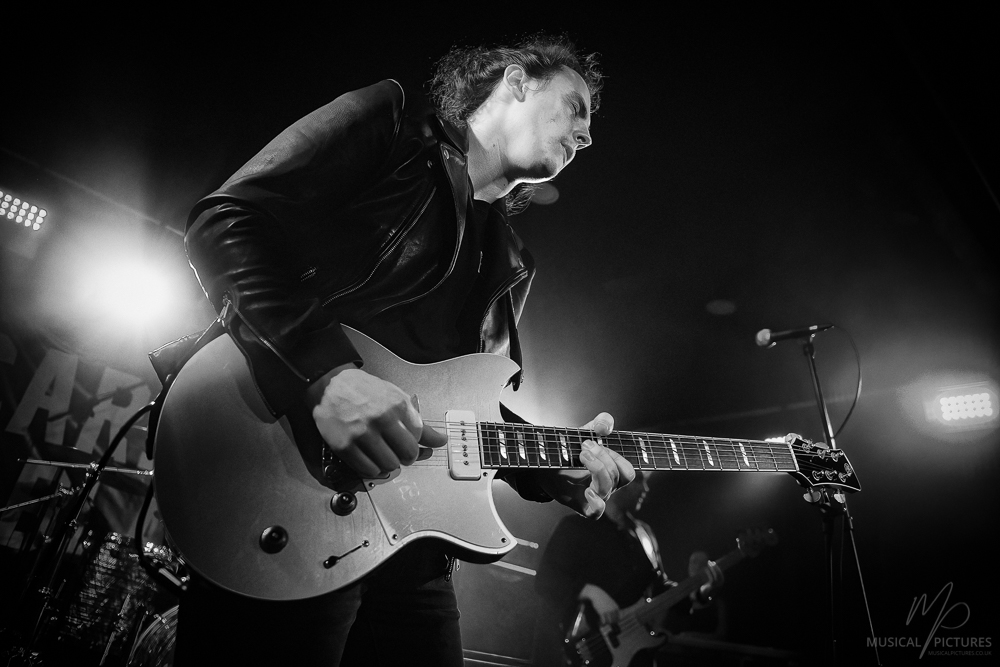 Part of the reason for this quivering of the nation’s musical antennae rests at the feet of Buck, who has built a formidable online following through YouTube and a series of videos entitled Friday Fretworks. His YouTube channel has north of 150,000 subs and every time I look, it’s shot up. By a lot.

His fans assist him in the winning of awards too. He was recently voted ‘Best Blues Guitarist’ and ‘Best New Guitarist’ in successive years by the readers of Guitarist magazine, but both are misnomers. Whilst Buck can drop a tasty blues lick with the best of them, his playing offers a whole lot more, and as for ‘new’ – well here he is sharing the stage of the Birmingham NIA with Slash in 2012. You decide how new that makes him. This year he’s up for ‘Best Pop Guitarist’. I can only assume they’re running out of genres because he’s most certainly not a pop guitarist – but I expect he’ll win, because people like me will vote for him. Probably multiple times.

Buck has undoubtedly brought much of the attention, but it would be a serious error of judgement to assume that Cardinal Black are ‘his’ band and that the music revolves solely around him. If ever the adage of the whole being greater than sum of the parts were true, it is here. Roberts and Williams lay a formidable groove but centre-stage in every sense sits the voice of Tom Hollister. It’s rich, deep, and has an abundance of soul. Rag ‘n’ Bone Man is an obvious, if somewhat lazy comparison.

The band have done a handful of support slots and are signed up to play first on Myles Kennedy’s forthcoming solo tour of the UK – but despite having a number one single, they were still to crack a headline show. This was corrected when they announced a warmup gig for the Kennedy tour. It sold out in hours. So they put on another one, and that did too.

Back to Cardinal Black in a moment, but before that, a couple of honourable mentions. Firstly, to the venue for this gig – The Patriot, a club which proudly carries the tagline ‘The Home Of Rock’. Located in the hamlet of Crumlin, buried deep in the Ebbw River valley in what was once the heart of the Welsh coalfields, The Patriot appeared to defy gravity – hanging precipitously off the edge of the road. I arrived 20 minutes after doors, but the place was already packed and had a real sense of community spirit sadly lacking in the London venues I inhabit most of the time. There was a bit of memorabilia on the walls and bizarrely, a full-size coffin suspended above the stage. None of the locals were able to explain why.

Second honourable mention goes to the support, Fireroad, who played a tight set befitting a venue calling itself the home of rock. If finely crafted wall to wall, twin guitar 4/4 bangers that make your ears bleed is what you’re after, then stick Fireroad on your shortlist. Richard Jones was centre-stage. He once played guitar with some bloke named Kelly Jones in a band that went on to be called The Stereophonics. You may have heard of them. That kind of near miss could entitle you to feel quite embittered, but there wasn’t a hint of it. To Richard’s right, Gavin Davies played sweet lead guitar. To his left, Craig Manning hammered out the bass, in what was his first gig for the band.

I often wonder when kits are shared, what drummers from the main act make of their gear being used by the support. Tonight’s Cardinal Black branded kit received quite the workout from Fireroad’s Matthew Whitney with the result that for a time the kick drum appeared to start making its own way across the riser. Matthew was at least battering his own cymbals and I was left wondering, not for the first time, why drummers share their skins but never the copper stuff.

It was heartening to see Fireroad letting rip in front of a full crowd. They’re a very local band with a very strong following. This was made clear when they played Second Hand Soldier, a song dedicated to the plight of veterans returning from theatre. It was delivered with a false ending that confused me, and seemingly absolutely nobody else. They finished with a ballsy version of Neil Young’s Rockin’ In The Free World. It was a great way to close Act One.

So, what were Cardinal Black like when they went on second? As it happens, pretty bloody good. An obvious problem for a new band in a headline slot is a lack of material and in truth, a setlist containing just eight songs plus two encores did on paper look a little light. Having an audience that isn’t going to recognise most of what you play (the band have, to date, only released singles taken from a four track EP) ups the ante, but Cardinal Black handled both issues with great aplomb.

Firstly, the band seemed extremely relaxed with the audience, taking time to establish a rapport between tunes. At the end of the first song entitled Run (one of the new ones, a fine up-tempo opener), Hollister remarked that he didn’t know what to do with his hands if he didn’t have a pint in one of them. Apparently, drinks are banned on the stage, though a couple of minutes later a fresh Guinness duly arrived anyway.

The band played Red, another new one, this time with a more balladic feel; then headed into more familiar territory with Jump In, a song from the EP. It’s another slower tune, which really gave Hollister the opportunity to open up those soulful pipes. He really is a spectacular singer and he offered a commanding presence on stage. By now, his pint had been swiftly removed again (rules is rules) and was being gatekept by the front row. Between songs, he stepped down for a swig and a little chat. 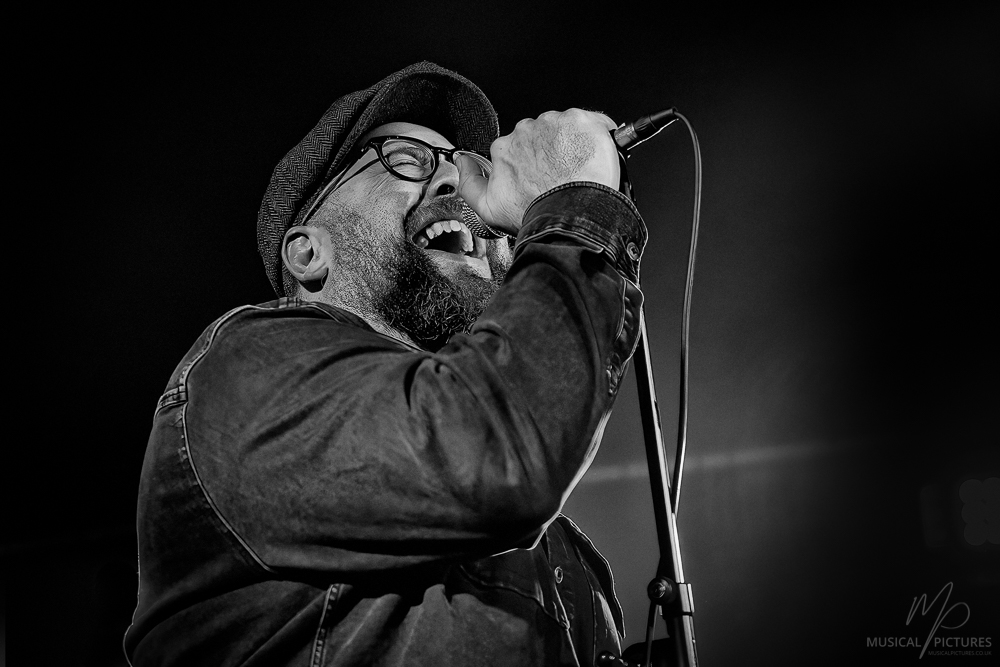 I wasn’t really sure what to expect from a band I’d never seen before and from whom I’d only heard four songs, but I can say that the music was certainly more eclectic than I’d anticipated. Two more new tunes followed. The first, Sorry, had a real psychedelic feel helped by a guitar solo with spacey delays which would have given goosebumps to the version of David Gilmour that still had long hair.

The second, Free, had an extended guitar solo in the outro and this was the first time that Buck really let rip. It says a lot about the confidence and maturity of the song writing, that Cardinal Black is manifestly not just a vehicle to allow their guitarist prodigy to show off. At the end there was expected and deserved wild applause, which Buck modestly accepted whilst explaining that after he first excitedly played this song to his wife, she declared it sounded like a charity single for a dying person.

The main set sensibly closed with two we knew. Tell Me How It Feels, the song which knocked Noel off the top, was rewarded with gusto from the Welsh choir. Then followed Where Do You Go?, a four to the floor rock song which really kicks ass and which the band really dug into. I got the impression they definitely enjoyed playing this one live.

Cardinal Black didn’t go through the motions of going off and on again before the encore; an act which mercifully seems to be dying out in smaller venues. Instead, Tom just took a slightly longer swig of Guinness. The band continued with Warm Love, the final track on the EP and I think my favourite of the quartet. It features some prominent funky Rhodes piano on the recording and tonight this was delivered by a fifth member of the live band, Cat Razzell, who was occupying an unobtrusive corner plot on the stage. They played an extended instrumental ending, punctuated with some crowd call and response singing. The atmosphere was truly special.

One more song, Tied Up In Blue closed out the set. There was another extended outro which brought the performance home in around an hour, a good 20 minutes longer than the bits of paper on the floor suggested could be viable. Cardinal Black’s ten original numbers tonight showed great song writing prowess and I’m really looking forward to the full-length album when it inevitably drops. In the meantime, there is the Myles Kennedy tour and no doubt a headline tour of their own taking in some larger venues must surely follow.

Did Cardinal Black live up to the hype? They did. And then some.