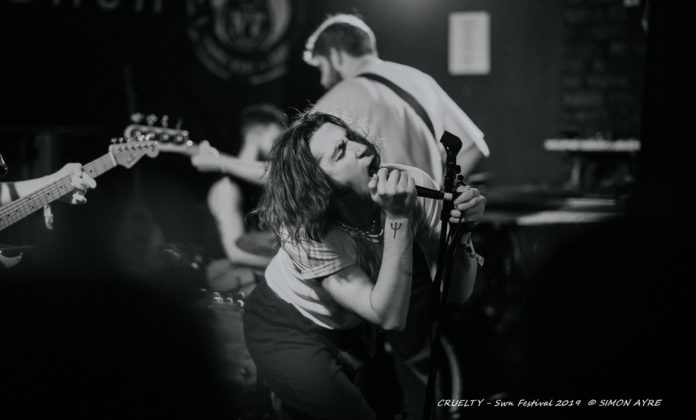 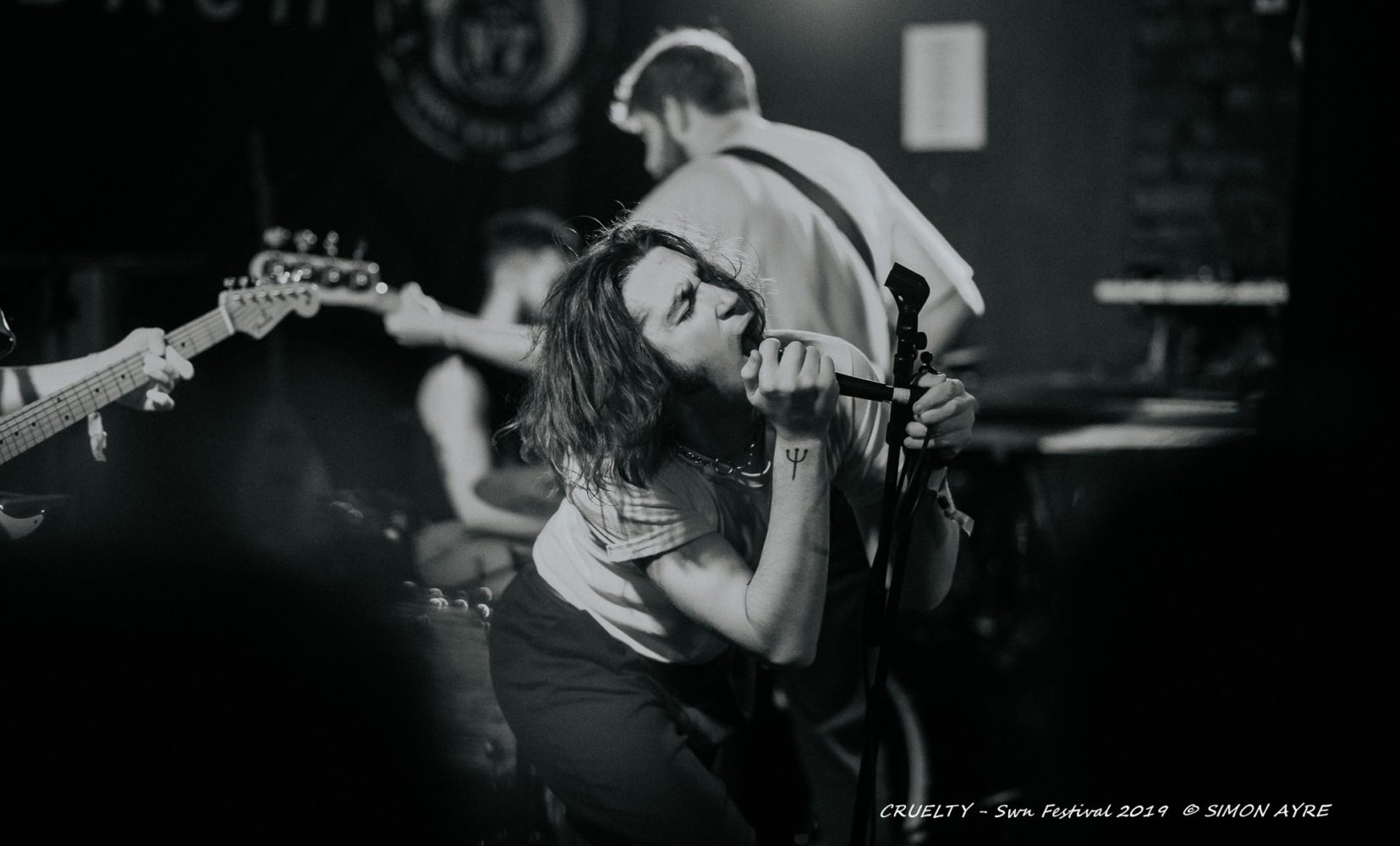 Keith Goldhanger heads west for his annual visit to the Cardiff Sŵn Festival.

Last year’s journey to Cardiff took over five hours longer than it should have from East London due to reasons we don’t remember or care about any more. This year we missed our train due to the Extinction Rebellion protests, OAPs trapped in the doors at Liverpool Street and the basic incompetence of one person who simply failed to get out of bed in time (two of these are lies, the last one is true).

Sŵn Festival 2019 then, and a line up filled with bands we’ve been writing about all year (and last year). We’re already prepared for returning home in a few days time disappointed that we missed stuff however all the signs are good for a great weekend ahead and we’re excited yet again to be heading to Wales. Our preparation has been helped thanks to the competence of the organisers who have been listening to what we’ve been listening to and have provided us with a web site featuring all you need to know about all 142 bands (the last time we counted), with easy to follow links to the music available that one of us has been listening to in order to fill the (not too may) gaps on our schedule we committed ourselves to (but will no doubt fail to stick to) a couple of weeks before buying the ticket for the train we missed.

Day one of three then and St Mary Street is already featuring men and women in bridesmaids outfits and inflatable costumes ready to drink themselves into a stupor before probably doing the same again on Saturday. These people are not attending the gigs and as someone once said ‘ Everyday is somebody’s birthday and someone still has to sing along to Mr Brightside after a few pints’.

Music then.
Bands.
Loads of them – We’re going in head first (once we’ve had our dinner).

RAINBOW MANIAC we go to see because the lady with the responsibility of placing the wristband on our arms had earlier told us they were her mates. That’ll do we said and got there on time to watch a new song Children On Shoulders (probably) which we liked before they got a bit too “Rock ‘n’ Roll on a Sunday afternoon down Camden Market with blokes wearing Rolling Stone T-shirts nodding their pony tails in time to the tambourine” (A genre of music Rough Trade still haven’t got around to including as far as we know).

Sometimes we feel that the best music we can witness is made by people with demons to release (we’ve all been there) or people full of dreams that one day they’ll own their own telly and to be able to leave the comfort of their mate’s sofa to get somewhere of their own to live once the never ending tour they also dream of finally comes to an end. Entering into our lives tonight are a band from Bristol called CRUELTY (top pic) that many of you still reading this will like. The lead singer is punching the floor and washing his hair (no soap) with water from a plastic (boooooo!) bottle before a note is even struck. He proceeds to walk amongst the crowd smacking the microphone into his forehead until it bleeds whilst the rest of the band thrash away making some beautiful music sandwiched somewhere between Eagulls and Bad Breeding. The band are wearing Simon Cowell/Murder Capital styled trousers. The waistbands are high, the trouser legs stop just above the ankles and their white t-shirts are neatly tucked in (this year’s look we’re told). Cruelty make a great racket and only have one tune available for us at the moment. A brilliant one too and one that means you only have to dedicate two minutes and nine seconds of your life in order to keep up to date with the rest of us. Disgraced seems to be a year old, therefore more tunes any day now we suspect may arrive. This is a mouthwatering prospect.

We hang around to watch JOSIAH KONDER from Denmark who has a backing band that look as though they were conscripted from the remains of a party at a local cricket club (the guitarist’s white jumper has a life span of about an hour post gig we reckon). A saxophone player blows his own trumpet too much but does offer us some lovely backing vocals for a minute or two. Joshia is great . Not quite as great as Nick Cave or The National but great for nine o’clock on a Friday night when it’s chucking it down with rain outside.

SUNSHINE FRISBEE LASERBEAM (“Where do they get their names from?” says the ghostly voice of John Peel) are an added bonus who give us three or four rousing, vocal heavy tunes that we’ll be digging into deeper when we remember. We’re in O’Neils (An Irish-themed pub… I don’t believe it Ted) to see EASY LIFE who have been on the telly and we liked that video of the singer in a wheelchair singing a bit like Jamie T with some smooth saxophones (again) and trumpets (again) complementing the light poppy hip hop beats. Unfortunately it seems as though the attendees in O’Neils (surprising for a capital European city to have an Irish-themed pub selling Guinness by the barrel-load but we won’t go on too much about this) were just hanging around waiting for the hit to arrive. We were not that patient so legged it around the corner to have another look at Just Mustard because even though their Liverpool Sound City appearance wasn’t too much to write home about (44 words, 221 Characters to be precise), we’ve heard many good things about them since.

But we missed them and decided to call it a day because we already know that Flamingods (or FLAMINGO DS as our friends call them sometimes) will be too hectic for the midnight hour and THE COMET IS COMING are due to play for at least an hour and a half that doesn’t start until about 1am and we know there’ll be more saxophones. We’ve missed Gruff Rhys as well, thus our annual visit to the Tramshed fails to happen this year.

We’re wet now and are a bit giddy with excitement about the two days ahead of us (as well as being knackered from the previous nights Scalping / Claque show and the Husky Loops show the night before that).

We’re off – Swn 2019 has began.
We’re easing ourselves in slowly.
Tomorrow the balancing act begins, the shortcuts between venues will be utilised and predetermined food breaks adhered to. Bands are appearing every minute across ten venues for the next couple of days, many of them are our favourites and some of them will be missed. The second day is yet to begin and already we’re sitting up too late, sorting ourselves out for some of these bands’ London shows later in the year and listening to more of the ones we’ve never heard of before instead of going to bed.

Our ears are ready, our alarms are set and a couple of hours sleep before heading off again should be enough.

Days Two and Three can be found here and here.

Words by Keith Goldhanger. Photo by Simon Ayre. More writing by Keith on Louder Than War can be found at his author’s archive. You can also find Keith on Facebook and Twitter (@HIDEOUSWHEELINV).

Listen to This! Manchester’s Mad Winter Release New Single Get Away

August 21, 2019
We use cookies to ensure that we give you the best experience on our website. If you continue to use this site we will assume that you are happy with it.Ok