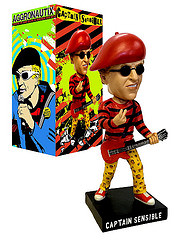 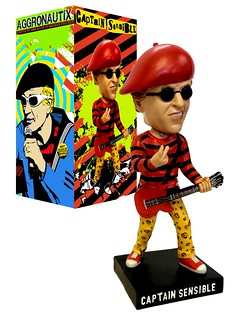 Well now its the turn of Captain Sensible!!

Captain Sensible, founding father of The Damned and punk rock hero for nearly 40 years, has been immortalized via Throbblehead. This figure capturing Cap’s signature look is limited to 1000 numbered units, stands at 7 inches tall, and is made of space-age polyresin.

All Aggronautix figures are now available for purchase on www.aggronautix.com and will also be available at many US based independent retailers, comic shops, tattoo studios, etc via distribution by MVD Entertainment Group – a company specializing in music-related distribution since 1986.

Let the good captain tell you to “sod off” on a daily basis as he gives you the ole two finger salute. He’s accurately sculpted right down to the beret, seething sneer, and leopard-print pants.

Check out the video as Sensible meets…Sensible

This video captures the Captain meeting his Throbblehead for the first time. It was taken when The Damned played a one-off London date at The Forum on April 24th to celebrate his 60th birthday. Tickets sold for the 1977 price of £1.70 each.

The Capt Sensible Throbblehead is Limited to 1000 Hand Numbered Units, and is available for Pre-Order now.