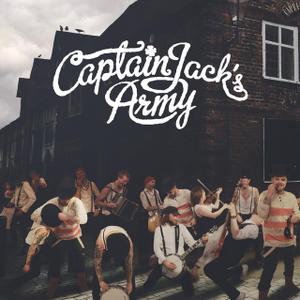 Captain Jack’s Army are a 7-piece celtic-punk band with a vast array of instruments including a banjo and violin. So far, so Flogging Molly. But this band hail from Sweden and their music betrays their Nordic roots in the most wonderfully talented way.

They formed when a group of friends, all of whom were involved in other bands, wanted to start a fun side project that sounded like their celtic-punk heroes. They quickly gathered momentum and were soon playing covers to packed rooms, getting the audience up and dancing and even stepping off stage to join in. Sweden was taken by storm and the band soon started writing their own material.

Royal Arms is Captain Jack’s Army’s first EP and contains four songs, each infused with the infectious folk-punk flavour that has made them such a popular live act. First track, Devil’s Eye, is fantastically noisy and really blasts you into the EP, pleasing your ears and getting your toes tapping. Without knowing the band were Swedish you would certainly be forgiven for thinking they actually hailed from Ireland!

Strangers brings a more mournful sound, with a haunting duet between the male and female lead vocalists. Hearing a female voice on such a record is a refreshing change, calling to mind the pure folk that influenced the genre. Whilst mellower than the rest of the EP, the song builds to a perfectly danceable crescendo, and could be compared to Ferocious Dog at their quietest.

Queen of Chaos, a clear dungeons and dragons reference, is entirely female-led, bar the euphoric ensemble vocals during the chorus. It’s just a lovely song, perfect for drinking to.

The title track has a definite Flogging Molly feel to it, except with Dropkick Murphys‘ shouty vocals. It’s one of those songs that you can’t help but dance to, although you’d probably end up moshing! There is a great discordance between the violin and the banjo, and despite being rather derivative it delivers a whole flavour of its own that you want to listen to over and over.

The EP finishes with a perfect cover of Dropkick Murphys’ Worker’s Song, brilliantly socialist and performed with such clear enjoyment that it’s infectious. Probably the most punk-influenced track, it gives you an idea of what this band will be capable of.

Writing their own material has clearly been an excellent move for Captain Jack’s Army, and I can’t wait to hear more. A band that can move seamlessly from covers to their own material is very rare, but this army might just manage it. I hope they continue to get Sweden up and dancing, shortly followed by the rest of the world.

Visit Captain Jack’s Army’s website here, they’re on Facebook here and you can hear the EP on Spotify