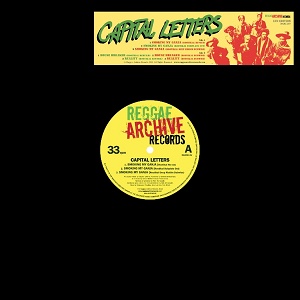 Rootikal have dug into the archives of the 1985 Reality album to give us some updated versions of Capital Letters tracks almost thirty years later. Three tracks, one which didn’t make the album, and four accompanying dub versions.

It’s fair to say that you’ll no doubt know Smoking My Ganja and Reality. They’ve been given a slightly updated treatment from the original versions and sound good for it. Whilst the subject matter for the lead track might seem slightly trite, it’s a great reggae almost ska track with a heavier bassline almost preparing you for the following dub versions. It’s catchy but has some of its pop prowess taken away and is better for it. The Dubplate Cut (as with all the dub versions here) is quite something else. The bass really shines and the added dubs of keyboards and guitars is nothing short of wonderful. The Deep Riddim Dubwise versions take the dub one step further and is lazy and sharp, stripped right down to the basic rhythm in a new hypnotic state.

The instrumental Housebreaker is making its debut on this EP. To be frank, it’s nothing really that special other than being the basis for a full vocal track perhaps, but when given the dub treatment it really comes alive. It’s been given a more traditional dub sound in a modern clinical mix and it sounds good for it, dub being one of the few genres that can actually gain by moving from analogue to digital.

The title track from the mid-eighties album is a dexterous groove with a memorable hook perfectly suiting the reggae pace. It’s a bit of an earworm. Its Dubwise version is a killer with a deep deep bass and some incredible vocal dubs.

Modern dub at it’s very finest courtesy of David Hill and Nick Manasseh, it echoes and vibrates around sumptuously, containing almost every dub trick in the book.