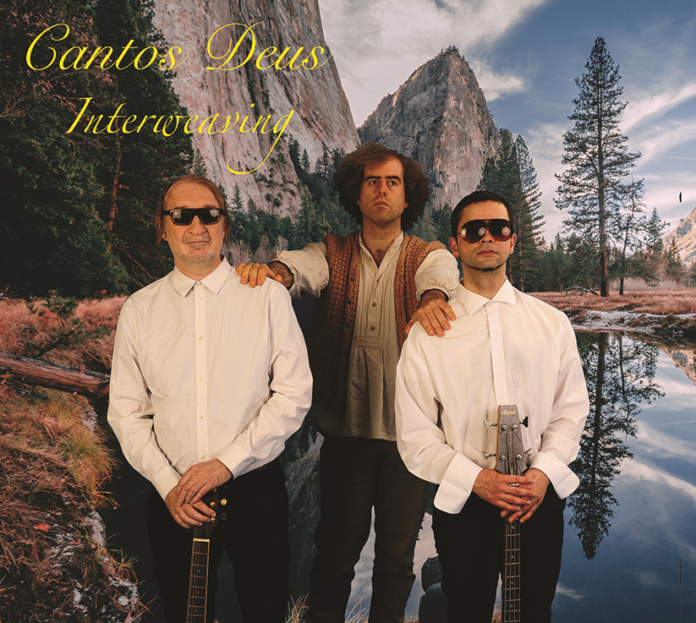 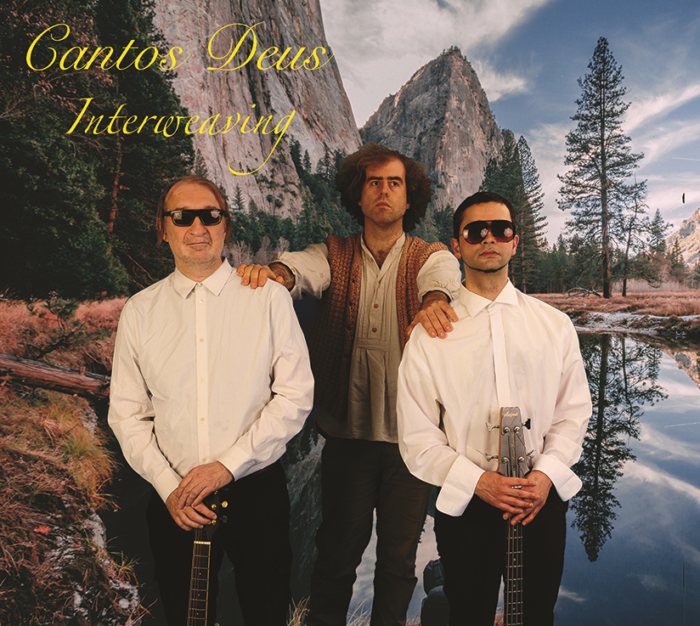 Maybe you will never listen to this record. But you should. Because it’s the sort of thing that gives you a whole new perspective on popular music.

Released privately, Cantos Deus’s Interweaving has nothing to lose. It can be what it wants and by Gad Sir, it does just that. We have 14 tracks that deal with the Lord, Satan and the Promised Land. Because of this, Cantos Deus – and by extension  the listeners – have freedom, “freedom to do what we want to do”; but maybe not to have too much of a good time, unless you are doing The Lord’s work.

So this is a queer record. A deliberately uneasy but addictive mix of camp menace, greasepaint and proselytising Christianity. People’s artist and theologian Jacco Weener, once singer in Zuid Nederland’s premier noise terrorists Gul Night Out has of late been active in other spheres, releasing books, painting bathetic representations of the Hull fishing strikes of the 1960s and indulging in Baroque opera. Rotterdammers Lukas Simonis and Bruno Ferro Xavier Da Silva are well respected musicians throughout Europe, serial collaborators who operate in that murky international network of talented underground musicians who actively avoid, or have been ignored by the Music Bizz. Their skill, particularly Da Silva’s ridiculously fluid bass runs and Simonis’s clever pop flourishes, give Weener’s ecstatic visions a solid platform to perform on. This reaches its climax on ‘Wake Me Up’ which is a stand-off between some glitchtastic electronica, and some finger burning bass slap.

And perform he does, from the wobbling declamations on ‘Get Yourself Ready’ to the pop dirge of ‘Put Your Fingers On My Body’; a prospect which, given Weener’s impassioned address, is not as appealing as it first sounds. The funny ‘He Didn’t Have To Do It’ could be a Sunday School take on PiL’s Fodderstompf. Weener enjoys himself a lot on ‘Follow’, which is a great slice of queasy funk with a vocal line that reminds this fried reviewer of Reginald Bosanquet’s ‘Dance With Me’ whereas ‘Interweaving With The Spirits’ could be an Al Bowlly vocal played on 17rpm. Sometimes the cod-lunacy of the vocal delivery can invoke a state of trance in the listener. Which makes one wonder whether Jacco Weener is looking to adopt the persona of the Holy Fool, beloved of Slavic lore.

The cover is revealing. In a way it’s a classic Rotterdam conceit, drawing on the city’s strong dada-street poet traditions. We see two men revelling in being uncool by playing cool (it’s the shades, geddit!?!?) whilst a third channels the Lord’s work. It’s ultra serious but not serious, hinting that grey areas are there to be explored, bins to be dipped into. Whether the trio realise they are running around with the cover template of the fabulous Kosmische LP, Lord Krishna Von Goloka, is not for us to know.

The music is actually quietly hypnotising, in places uplifting. There are things that remind me of early Pere Ubu (not just the shrieks, gargles and groans in Weener’s vocals) but some of the way things are set up; namely brutal contrasts, the favouring of minor chords and abrupt silences. It’s got something of The Residents, too, especially the Mole Trilogy. ‘Hellfire’ is a singalong of sorts that could be from an Armand Schaubroek record. I think you get the picture.