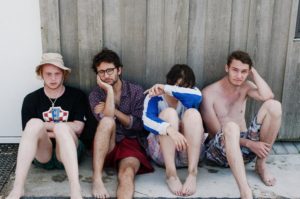 Canshaker PI are an Amsterdam-based quartet who have just released their latest single called Indie Academy via Excelsior Recordings. Pavement’s Stephen Malkmus took a shine to Canshaker Pi’s noise pop weird haphazardry and subsequently producer Remko Schouten flew Malkmus over to the Netherlands to record with the band.

Releasing their debut album at the tail end of 2016, the results of those sessions is captured on the debut which led the band to play the infamous Le Guess Who? Festival and nearly every other relevant Dutch festival this year.

It’s no surprise that both Malkmus and Kannberg  (Canshaker Pi are touring Europe this autumn alongside Spiral Stairs aka Scott Kannberg) champion this band as their influence as Pavement is all over this track. This ramshackled, yet tuneful lo-fi approach to music is far reaching and has a family tree that reaches from Daniel Johnston, Truman’s Water and right back to The Thinking Fellers Union Local 282 and Jandek. Yet it’s got legs and is far from extinction just yet.

From the start this track has a great insistent drum beat that leads to a gorgeously simple guitar riff. There are some stop starts and dramatic pauses that lead to nice layers and they mix well with the catchy choruses.

The guitar riff manages to run around the track and eventually around your head. It has peaks and troughs that drag you in kicking and screaming until you can’t but love this track. Nice stuff.