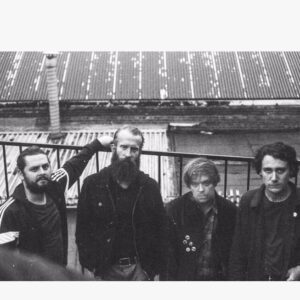 Hailing from Hull, Cannibal Animal are Thomas Joad Gibbins (drums), Luke Ellerington (vocals and guitar), Jacob White (guitar) and Jamie Hanson (bass). On 16/03/18 the band release, their new EP A Decline in Morality with the lead single from it Ellipsisism out now.

According to the band, the EP was born out of a period of experimenting with “rhythms and more complex and unorthodox song structures and concentrating less on writing a three minute raging attack”. They expand “the EP’s lyrical themes still revolve around anxiety and desperation but these songs are a lot less personal and more nonsensical”.

Ellipsisism starts with a throbbing bass and a jagged, almost psychobilly guitar line full of creeping dread. Insistent and barked vocals by Ellerington gives the single an urgency and feels like a call to arms against boredom and complacency with the refrain of “climbing up the walls and filling up with dread”. The last third sees the insanely catchy chorus ramped up with added distortion and the barking vocals turning into a scream and a gorgeously wonky guitar solo.

I absolutely love this band! They remind me of the much missed Eighties Matchbox B-Line Disaster, but more than fill their void. They have an anger and a frustration, but also a cheeky playfulness that aligns them nicely alongside fellow post punker IDLES and Negative Space.

A Decline In Morality was produced by Pat Pretorious (Vulgarians, The Black Delta Movement) in AOO Studios in the band’s hometown. Buy this now!

You can find the EP on Bandcamp here

Here are Cannibal Animal knocking out a live version of Ellipsisism: