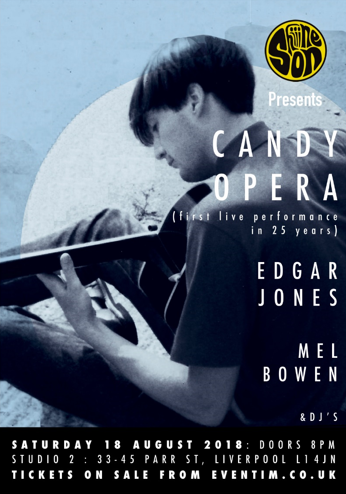 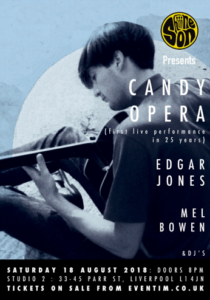 Cult Liverpool band Candy Opera have announced their first live performance in more than 25 years. The band will take to the stage on Saturday 18th August 2018 for a homecoming show at Liverpool’s Parr Street, Studio 2. Support on the night comes from fellow Liverpool legend Edgar Jones and Mel Bowen, frontman of Mercury 13 in a gig presented by Shiiine On.

The much anticipated show follows the release of the superb lost Candy Opera album 45 Revolutions Per Minute which came out in February this year to rave reviews.

Candy Opera were formed in 1982 on Liverpool’s notorious Phythian Estate in Kensington taking their influences from the symphonic pop of Love’s Forever Change’s and The Beach Boys’ Surf’s Up alongside contemporaries such as Aztec Camera, The Pale Fountains and Prefab Sprout.

The band’s 1983 ‘Honeysuckle Rose’ demo has become something of a holy grail and by 1985 the band had played alongside the likes of The Pogues, The Go-Betweens and The Redskins, as well as appearing on Granada TV.

After a decade ploughing their own stubborn furrow in various guises, despite interest from EMI and Go! Discs, Candy Opera called it a day in 1993 with only a fistful of demos to their name. As the mainstream took a glossier turn, Candy Opera somehow got left behind, and for the best part of thirty years have remained a rumour, a whisper and a quietly lost legend that the occasional online leak could only hint at. Until now…

In 2017, the Berlin-based purveyors of indie obscurities behind Firestation Records chanced upon those same demos and it was love at first listen. The label’s Uwe Weigmann tracked down band members and found a band who hadn’t made music for a very long time. Having unearthed a spate of recordings that span Candy Opera’s entire history, the result is the superb 45 Revolutions Per Minute.

Following its release the album sold out straight away and due overwhelming demand from fans, the band are now ready to return to the live stage for the first time in more than 25 years for what promises to be a special night in their hometown.

Speaking about the show frontman Paul Malone says: “I hope our new live show is as well-received as the album has been. Playing together again after such a long time is something that we’re all really excited about, especially as it’s on home turf.”

Tickets for the show are already on sale via this link

Candy Opera will also be performing at the Shiiine On Weekender in Minehead in November. Tickets available via this link. Candy Opera can also be followed via their official Twitter and Facebook pages.