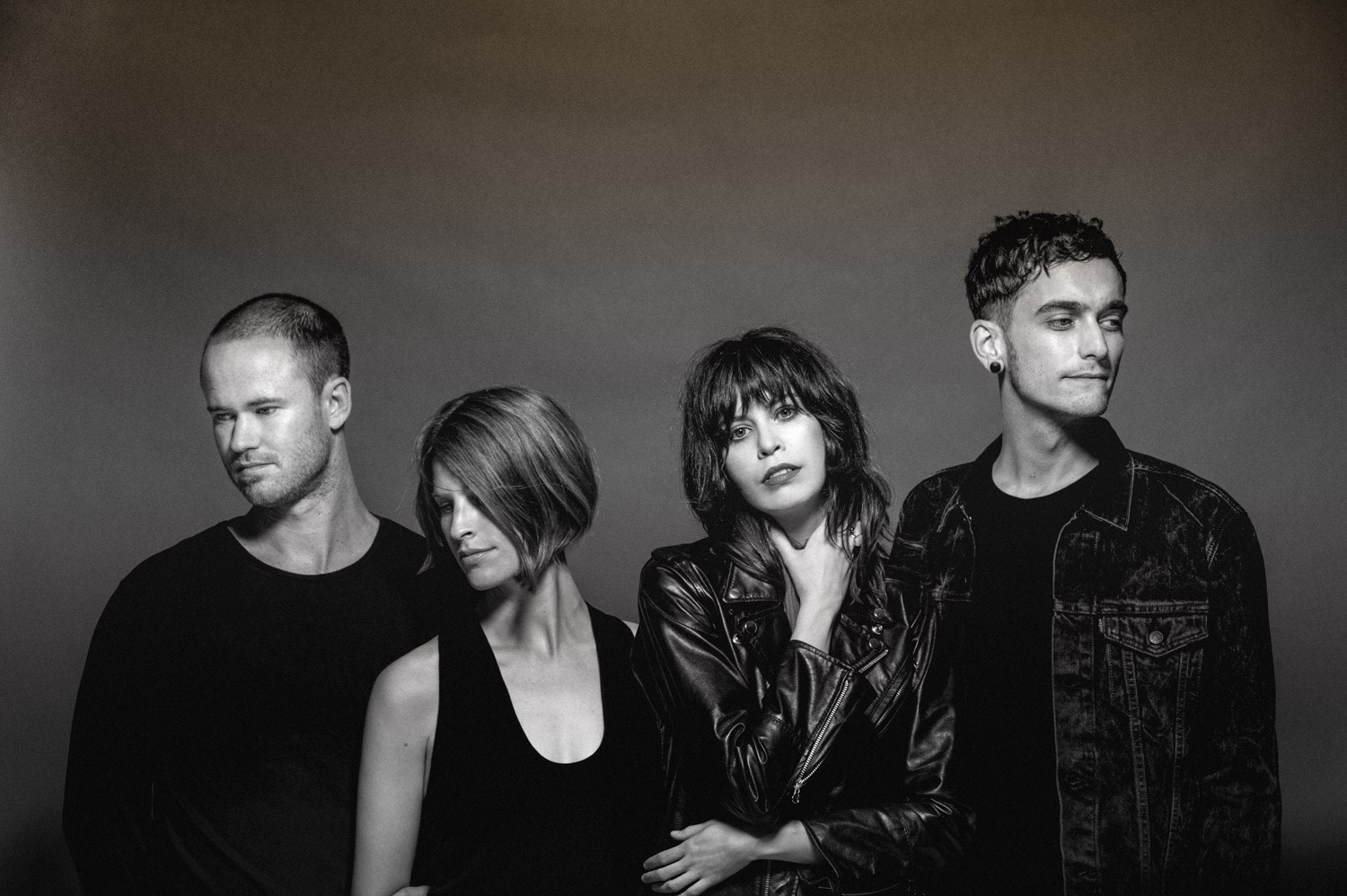 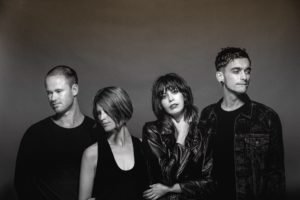 The Jezebels are no strangers to adversity. During the cycle of their second album, The Brink, the band’s piano/keyboard player Heather Shannon had to confront and deal with the frightening news that she had ovarian cancer. Now, three years later, and coinciding with the release of their third and most congruent studio record, Synthia, produced again by Lachlan Mitchell, and Heather has had a recurrence of the ovarian cancer that plagued her before.

Despite concrete plans for a multi-territories promotional Tour, the band has decided to go ahead with the record’s release while cancelling the Tour in order for Heather to receive the treatment, love and support that she needs.

Louder Than War spoke with Hayley Mary (McGlone), the effervescent front woman from the band recently about their revised plans and about some of the issues embedded in the compositions on Synthia. Here’s what was said:

Louder Than War: The Jezebels are a live band, and I was wondering how Heather’s (Shannon’s) health situation has impacted upon the bands plan for promoting the new, third album, Synthia, live?

Hayley Mary: Basically, its completely changed everything I suppose because we are primarily a live band, normally, there’s been a lot of things that we’d normally do, that we can’t. Rather than waiting to release the record, till we could tour, we felt like it would be cathartic and symbolically nice for our fans to at least have the record,considering that we’re cancelling the tour. So we’re just doing all we can, talking with any one who wants to talk about the record, to promote it, to put it out there, because we like it, and it’s nice considering we don’t have the tour, and all this adversity in our lives now, its good to have something to focus on, which is the release of the record.

LTW: What’s important for the band right now, at this time given that there are some specifics, this ongoing event with Heather that has been going on for a few years? How are you trying to compensate for that?

HM: The main thing is just being positive and making sure that Heather has everything she needs so she can just get well, and we can tour again. That’s it really. We’re not planning anything, at the moment, other than putting the record out and getting Heather better, living our lives – and being positive about it all.

LTW: Okay, so how much of your musical differences as individuals have been reconciled and has that sonic unification augmented your sound in this new album?

HM: That’s right, that was the question – about whether it become more homogenized which you’ve changed. I think its like a relationship: when you write together, and your with them from the start, the sex gets better; and the music is the sex. It becomes more coherent, passionate, unified – and of course, after a while, it might get stale, and homogenized, like you were saying. But I think Synthia was good sex for us, a good time in our marriage.

LTW: So, out of all the compositions on that album, which compositions resonate most for you, and, dare I ask on behalf of our readers, for Heather?

HM: I don’t think I can speak for her, but I think she likes ‘Smile’ a lot. Actually, I think all of the guys in the band liked Smile. They like the lyrical content and the big chorus’, combined with the groovy verses. It’s very Jezebels in its message and its very Jezebels in its shifting dynamics…

LTW: Can you say more about it being ‘Jezebels’ in its message?

HM: Yeah, its about a girl Its me really! It’s drawing a line where they allow…. where the dynamics play out, with men. ‘It’s like, I don’t mind if you have a sexuality of your own, a desire for whatever, but don’t tell me to smile. My line: ‘Don’t tell me how to feel’ that’s my vicinity. So, if your aware of this: girls walking down the street getting told by strangers to smile all the time, its quite a frustrating thing. It’s quite a small idea for the song…

LTW: It’s not really if you think about it in terms of: ‘This is my emotional real estate, don’t tell me how to govern it!’

HM: …and also, if you think about it in terms of: Don’t tell me how to communicate, I’m not a prude! I’m not angry. It’s a personal thing! I don’t even mind getting whistled at, some people have a problem with that, and that’s their prerogative. I don’t mind catcalls, or men, or women for that matter, expressing themselves how they do, but I do mind them telling me how to feel in my personal life.

LTW: Do you think that some of the disapproval with catcalls and the likes, is kind of political correctness gone mad?

HM: I don’t! You know ‘political correctness gone mad’ is such a contentious subject because really, I don’t think feminism has gone too far, I don’t think anti-racism has gone too far. I really don’t think the white privileged classes are really in the position to start talking about ‘political correctness going too far’. I can see, if your walking down the street, you feel imposed upon, when someone whistles at you, its a little bit of a verbal abuse potentially, for some people, particularly women who have had issues in the past with abuse, or been hassled. I mean you don’t know what people have gone through, or where they’ve come from, or their cultural background. So it is kind of rude. Personally, I don’t mind, I find it complimentary if a boy whistles at me. I mean, I guess this doesn’t help as far as a guide on how to behave towards women, It’s always going to be a bit of a mystery, but I was just expressing a thought I had rather than solving the problem of the dynamics between men and women ha ha…

LTW: Do you think women are demonized as much as the original Jezebel in the Old Testament of the Bible, and how much misogyny still exists in Music today – in your view?

HM: On a world scale, definitely, because you still get women being killed in some cultures when things go wrong and there is blame. In a sphere that’s more sort of relevant to my life, you see it a little bit, for example with Yoko Ono being blamed for the Beatles breaking up or Courtney Love being blamed for Kurt Cobains death, with him being revered as the Rock God, even though she is a Rock Godess in her own right. I think things like that definitely demonstrate that their is an attitude that women are manipulative, or evil, still very much plays out. I also think that we tend to allow historical archetypes to poison our view of most people, including men, from every race. We tend to have that xenophobic view of each other, based on things that we don’t really know, that we’ve just been told. Things that have been made up to create a dynamic of fear between humans rather than love. I think if you listen to anyone like Kurt Cobain or John Lennon, you wouldn’t buy into the idea that women are evil and manipulative. You’d be embracing and loving, and you’d probably be a Feminist!

LTW: Yes definitely! So speaking directly to the perceived double standard in Cock Rock, do you think its okay for women in Rock to take advantage of the skewed dynamic between Performer and audience member, and are you ever tempted to seduce and shag a member of your audience to whom you are attracted?

HM: Oh yeah, that’s right, we got there! That’s something else I’ve noticed, the assumption that a female audience member is a groupie and a male is a music lover, or a critic. I came to that conclusion as I was talking to you, didn’t I ? I’ve realised that I’d feel strange, sleeping with or pursuing a relationship with a guy, or girl, who’s a fan, because there is a power dynamic – not that you’d be exploiting – but that you’d be a bit of a Creep, maybe because of the assumption that you’d be exploiting, and it would be a predatory sort of vibe. That doesn’t seem to be the same for guys doing the same thing. Then I thought, maybe we should turn the table and start sleeping with male groupies, but I’m not sure that exploiting what men have exploited in rock n roll history, is the best cause for Feminism. It’s like that role reversal Feminism: two wrongs don’t make a right. Not that its wrong to sleep with a groupie. If the problem is the power dynamic, then I’m not sure? And then again, I think it could be fun you know, on a somewhat lighter note…ha ha ha, and maybe I’ll try it!

HM: Yeah, well, as I was saying before, we don’t know. Even though this has been a condition (Ovarian Cancer),that Heather has had for a few years, the recent development was quite sudden, and we’re kind of in a bit of shock, and we’re not really sure what we’ll do. We made the decision to cancel the tour and still put out the record, and that’s all we’ve decided. I’m going to live in London for a bit because my ticket out of here was the tour, and now I’m here. I know what the other guys are doing, we’re just getting on with relatively normal lives and hoping/wishing Heather the very best and making sure she has everything that she needs to get better. We’ll promote the record in some territories if we can, bu yeah, thats it!

LTW: Yes, Hayley thanks so much for taking the time to talk to Louder Than War !