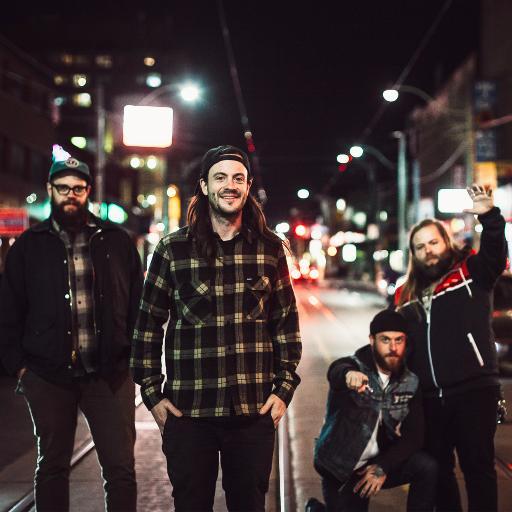 I had not heard much of Cancer Bats music before this gig. I had a seen a few snippets on Youtube so I was expecting a hectic one. I’d heard of them and seen their merch around. But more than anything, I was sadly well aware of them famously being on Stephen Sutton’s bucket list before he bravely succumbed to cancer in 2014. His wish was to crowd surf in a rubber dinghy in a Cancer Bats gig (see the pictures. It looked awesome!) So I had to see for myself if and why they were bucket list worthy and what the fuss was about. Well they did not disappoint.

The crowd had been very ably wound up by three great support bands (Incite being notable for having Max Cavalera’s son Ritchie on vocal duties. They are bloody good by the way. Look out for them) so by the time Cancer Bats came on, the sold out crowd were gagging for it.

From the moment the first song kicked in, there was beer and legs flying. There was no let up in the ferocity and riffage from this band. They are not only fast, but they are LOUD! The amount of noise these four Canadians make really is astonishing. And with veins bulging in his neck, everyone hung on every word lead singer Liam Cromier screamed at them.  The security struggled and seemed to give up half way through. Microphone stands were pushed over. The microphone got passed around in the crowd. I had sweaty hair in my face. It was that sort of gig.

The band informs the crowd that this is the only sold out date so far on their tour. They obviously have a massive following in South Wales and they seem genuinely chuffed with it. And while I may not have been a massive fan of this genre of music before (on record anyway), played live I came away a massive convert.

Coming home from a gig and working out whether it was great or not is a very scientific thing. I shall write an academic paper on it one day. I have always loved a bloody good mosh pit! Don’t ask me why. It’s not unusual. Lots of people do. It’s probably about being in the middle of people having a right laugh and letting lose for an hour or so. The quality of the pit obviously relies on several things, including the ferocity of the band on stage, the amount of people; the amount of alcohol consumed (which is directly proportional to inhibition reduction) and the overall reception the crowd give the band. This gig had it all. Furthermore I think nursing a black eye on the train back is also a mark of a good mosh pit. I got kicked in the face by a crowd surfer. I think the imprint of his DMs were still on my head when I got home. I bloody loved it! I wholeheartedly suggest you put Cancer Bats on your bucket list too. Catch them in a small venue like Hobos. You won’t be disappointed.