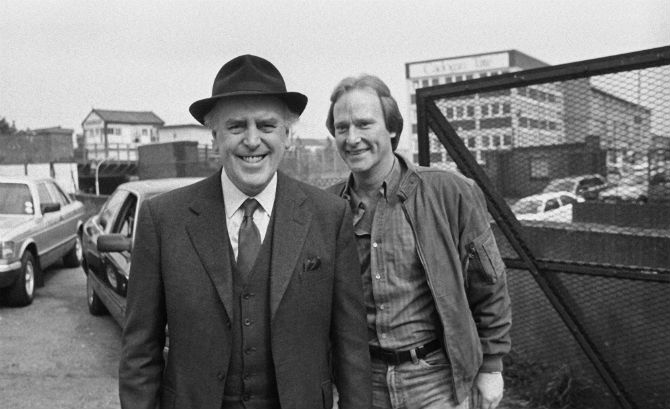 We’ve all sat there and sang along to them and could probably knock off a live version at any time of your very own favourite TV theme tune.

When you think about it there’s loads of ’em – even the instrumental ones like ‘Raising Damp’ and ‘The Good Life’ – that just sit in your memory for ever, catchy has hell and lyrics so corny you got to love ’em.

Here’s five fave theme tunes that Carl Stanley tells us he’s been known to sing very badly in the bath..

Only Fools and Horses/ ‘Hooky Street’

Probably the most recognised and loved theme tunes of any British TV programme comes from the extra funny ‘Only Fools and Horses’, and that’s both of them.

Something like the bands that used to know the value of sticking out epic b-sides like Oasis, The Jam, The Smiths and The Clash, the producers of O.F.A.H quite rightly fitted out one of the UK’s most treasured comedies with two classics.

Opening up with the self titled ‘Only Fools and Horses’ song, its ‘2 for the price of one’ market-spiel lyrics to a ‘roll out the barrel’ style shuffle makes it one of those you cant help singing along too. But its the beat driven outro of ‘Hooky Street’ that’s a personal favourite, the tunes funny/clever lyrics listing the Trotters dodgy bargains of the day; “Trevor Frances Tracksuits from a Mush in Shepard’s Bush” and so on, though a very short tune as it only ran at a quick 1:08 seconds in full.

For some reason I always used to imagine it was ‘Rodder’s’ or rather actor Nicholas Lyndhurst who sang Hooky Street as it sounded just like him, but it was in fact John Sullivan who wrote both theme tunes.

Originally planned for Chas and Dave to sing the ‘Only Fools and Horses’ theme tune it was Sullivan who in the end composed a set of lyrics for the song and sang them himself. It was also Sullivan who decided that the saxophone led instrumental needed lyrics that described the shows bizarre title.

Chas and Dave did end up contributing to one episode with ‘Down to Margate’ – the show that saw Del and the locals from The Nags Head out for a day at the seaside.

Both theme songs managed to dodge the BBC’s strict crediting rules and tight regulations allowing them to be played in full.

Minder/ ‘I Could Be So Good For You’

That sketch from the comedy show ‘Little Britain’ where a tiny Denis Waterman sits in his agents office listening to potential TV work in the offering which he ultimately ruins by demanding, in his little voice, that he should ‘write the theme tune and sing the theme tune’ always gets a laugh.

Though it does sort of make you wonder if Waterman really did fancy himself as a singer and listening to his rendition of the theme tune to Minder ‘I could be so good for you’ you’d not be wrong in thinking so.

Something that was in no doubt encouraged by ‘her in doors’, or rather his wife Patrica Waterman who along with Gerard Kenny wrote the song between them. With the theme tune being released as a single and hitting number 3 in the charts Waterman went on to tour the UK on the back of its success and whats more he went on to cultivate a name for ‘singing the theme tune’ by providing the lead vocals for other theme tunes – On The Up, Stay Lucky and ‘New Tricks’, but its that Dennis Waterman tour that makes the mind boggle.

Kinda makes me wish I had the use of a time machine just for one day as it would definitely be worth the journey just to see him ‘live the dream’ at The Skegness Pavilion or where ever. I bet he was ace!

What ever happened to the likely lads/ ‘What Happened to You’

The anthem like, happy/sad and ever so nostalgic theme tune of ‘What Happened to You’ which signalled the start of ’70s northern comedy ‘What Ever Happened to the Likely Lads’ was co written by Ian La Frenais and Micheal Hugg who was part of the ’60s beat band Manfred Mann.

Hugg performed the song with his session group and released it in 1974 with a group called ‘Highly Likely’ who made an appearance on Top of the Pops playing it. He also followed up on that with writing the song for the shows spin-off feature length film with ‘Remember When’.

The tunes popularity can be measured when it made ‘Penguins’ all time top 5 TV theme songs coming in at number 3. First was the 1960’s children’s TV show theme tune to the Yugoslav-German co-produced ‘The White Horses’ with Tony Christie’s ‘Avenues and Alleyways’ which featured on the 1970’s TV show ‘The Protectors’ taking the number 5 spot.

Its actually quite a sad song which probably reflected the hard times of the mid-latter ’70s where people left their home towns looking for work or just ended up in the gutter.

When ever I hear it though it always brings the images of Vauxhall Chevette’s, bell-bottoms/ donkey jackets, disco and The Wombles playing on Top of the Pops – it’s the sound and vibe of the mid-’70s Britain.

Joe Fagin’s previous work lists such accomplishments as being one of the many who sang on the Bradford City disaster charity single ‘You’ll Never Walk Alone’ (though very commendable) as well as musical director to – of all people, Jim Davidson – but in no doubt Fagin’s most renowned piece of work comes from the 1983 hit TV show ‘Auf Wiedersehen Pet’.

Written by David Mackay and co writer Ken Ashby ‘That’s Living Alright’ was originally released as a single in 1984 reaching number 3 but was also re released once in 95 and then in 2006 which Fagin released for England’s world cup campaign, re-titled ‘That’s England all Right’.

Auf Wiedersehen Pet really spoke about the working class’s way of living back when Maggie Thatcher’s anti-working class tirade was still in its infancy.

It was TV that represented and spoke to the working man/woman of Britain rather than parodying and insulting them like some shows do today, its ‘open season’ attitude on anyone outside the rich and the middle classes. If the script for Auf Wiedersehen Pet landed on the desk of the channels today they probably wouldn’t touch it with a barge pole, but it was the theme tune that celebrated those working class ideals.

Backed up by the ‘Joe Cocker’ sound-a-like, smokey voiced Fagin who delivered one of the ’80s greatest British TV theme tunes, along with other compositions like ‘Breaking Away’ he also covered for the show.

In sickness and In health

Another stand out theme tune to its equally loved comedy show is ‘in sickness and in health’ performed by the duo who brought us the sounds of ‘Rockney’, cockney pub rockers Chas and Dave who was meant to originally sing the ‘Only Fools and Horses’ theme tune.

Just hearing it makes you want to go down the pub for a pint of real ale.

The pair who also wrote it had to make changes through the years most markedly in 1986 due to the passing of Alf’s long suffering wife in the show Else Garnett, played by Dandy Nichols.

The first set of lyrics below were the original lines from the song and the second show some of the re-writes the tune went through.

Now my old darling they’ve laid her down to rest
And now I’m missing her with all my heart
But they don’t give a monkeys down the DHSS
And they’ve cornered off my pension for a start
I suppose it won’t be very long before I’m by her side
I’ll Probably starve to death that’s what I’ll do
For Richer or Poorer, bloody poorer that’s a fact