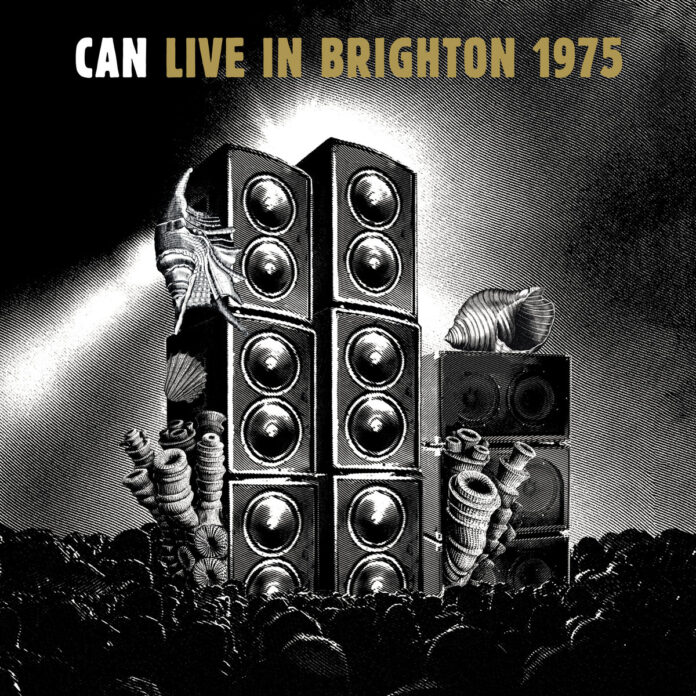 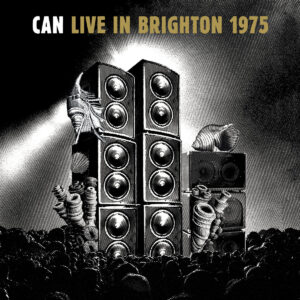 Can release the second in their series of live album releases from the vaults, a 90-minute odyssey of experimental music recorded live in Brighton at the height of their powers in 1975.

There has never been a group like Can. They never fitted in, always seemed ahead of the times, never suited any sort of label. Calling them Krautrock never meant much beyond the bald fact that they were German, and came out of that experimental scene in the late 1960s and early 1970s.

Calling them Krautrock is about as useful as applying the word ‘rock’ to everyone from Black Sabbath to Soft Machine, Pink Floyd to Led Zeppelin. It doesn’t really help, and they wouldn’t thank you for it. When we think of Krautrock we tend to think of the repetitive motorik rhythms of Neu! (at least I do) and the mechanical electronics of Kraftwerk, or perhaps the kosmische noodlings of Faust and Tangerine Dream. Can were always a different fischkessel.

You’d expect nothing less from a group formed by two students of Stockhausen with an interest in the avant-garde. One was a classical composer, conductor and keyboard player (Irmin Schmidt) who had gone to New York to study Steve Reich and Terry Riley and instead discovered Sly Stone and The Velvet Underground; the other was a music teacher (Holger Czukay) who played bass guitar and pursued his passion for making tape samples, using a short wave radio.

They were joined by two avant-garde jazz musicians: a free-jazz drummer with funk inclinations (Jaki Liebezeit) and a teenage guitarist (Michael Karoli) who had grown up playing violin and banjo before graduating to guitar under the tuition of Czukay, his music teacher. Together in the studio – and, as here, in concert – they would simply start to play and follow Stockhausen’s principles of aleatory composition, leaving the music’s development to chance and improvising according to their mood and intuition.

No two gigs – no two songs – were ever performed in the same manner. Which means that concert recordings like this, from a performance in Brighton in 1975, are such unique documents: unless you were there, the music will be unfamiliar even to those familiar with the group’s entire studio oeuvre. These recordings, available for the past 45 years only on bootlegs, have been processed and produced and tidied and mastered by Schmidt, now the last surviving founder of Can, and producer/engineer Rene Tinner, though most of the music has been left unedited so it can be heard just as it was by the audience at the time; hence the occasional shouts of blokey Can fans.

All Can’s music was improvised but concerts allowed their innate experimental tendencies to run wild: consequently the seven ‘songs’ on this 90-minute collection remain untitled, merely numbered in German from Eins to Sieben. Those in search of something familiar may identify fleeting fragments of album favourites like Moonshake and Bel Air (Future Days) and Dizzy Dizzy (Soon Over Babaluma), but not in any recognisable form; themes, riffs and other aelements appear as passing objects that can be recognised like meteors, or shooting stars, before disappearing from view as swiftly as they came.

That’s as close as Can ever get to “promoting” an album. And in terms of promoting their new one at the time of this concert – Landed – there are fragments scattered throughout the set, as if the group recognise that they have new material to sell but are compelled to take those songs further into the future now that they have been committed to vinyl. The nearest they get to a whole album tune is track four – Vier – which incorporates a recognisable section of Vernal Equinox within its 14 extended minutes. Karoli channels or appropriates (knowingly or coincidentally; who knows?!) the riff from the Spencer Davis Group’s I’m A Man, which would itself later be borrowed by Bauhaus for Bela Lugosi’s Dead, before being borrowed again for Breathe by The Prodigy.

And thus do we see – and hear – how the influence of Can has continued to exert itself on successive generations of musicians, not all of them obvious (Pete Shelley has cited Can’s Michael Karoli as one of his guitar heroes when forming Buzzcocks) for half a century. You can hear all those influential components over the course of Vier, which begins with audience members yelling over Schmidt’s delicate piano intro before Liebezeit’s cacophonous drumming restores some sense of disorder to proceedings. An organ drones, a guitar squeals, a bass rumbles, and strange synthy noises squelch into the mix, although there were no synths at this point in Can’s career.

Songs start, stumble, veer into different directions, swell, subside, gather pace again and allow each musician to take the limelight until another moves back into view; if Liebezeit’s drums often seem like the most prominent component, that’s only because the percussive sounds take root; listen another way and you’ll find Karoli’s fluid guitar lines weaving textures through those polyrhythms; listen another time and you’ll notice what Czukay and Schmidt are doing.

It’s all there, culminating on the closing 18-minute Sieben in an excursion that has, somewhere deep within a journey that ranges from drifting ambience to percussive mayhem and all points in between, a reference to Vitamin C (from Ege Bamayasi). At least that’s what the notes say; the quartet have, typically, transformed it into a sonic meltdown and taken it to the outer limits.

For those of us who never managed to catch Can – and they would top my list of bands I wish I’d seen ahead of all others – this is as close as we can ever come to a time travel experience. It must have been extraordinary to be there. It’s extraordinary enough listening now.

Can Live in Brighton 1975 is released on 3 December 2021 on limited edition triple gold vinyl and double CD, both packaged in a gatefold sleeve with accompanying booklet. Sleeve notes are written by Can biographer, author and editor Rob Young and British journalist Kris Needs who saw Can several times at the Friars club in Aylesbury between 1973 and 1977.