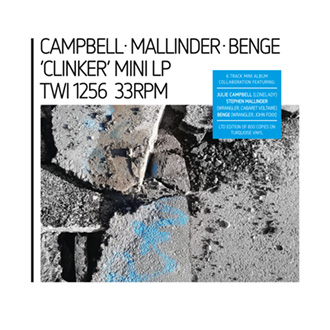 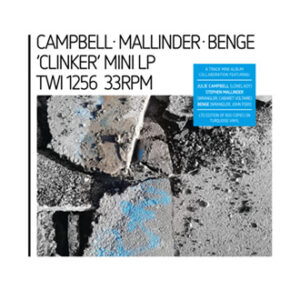 CD issue of the collaboration between Julie Campbell aka LoneLady, Cabaret Voltaire’s Stephen Mallinder and Benge, with the latter two also being part of Wrangler. This mini-album is made up of six tracks and has remixes by Gabe Gurnsey and UXB included as bonuses. Ian Canty clinks his small change…

If ever a project seeking to bring together different musical parties had a good chance of success, Campbell Mallinder and Benge would be it. Julie Campbell’s LoneLady has been at the very apex of the modern interpretation of post punk sounds since her emergence in 2009 with the Immaterial single. Stephen Mallinder’s pioneering works with Cabaret Voltaire, as a solo artist and also his more recent recordings as part of Wrangler with Benge and Phil Winter of Tuung are all highly revered. Benge has also recorded with the great John Foxx among others.

Having established the participants’ back story, it is clear that this new aggregation has some pedigree to live up to. Happily over the course of its running time Clinker reveals itself as a very potent mix that adds new wrinkles to their collective histories. The recording of this mini-album began a few years ago when Benge and Julie worked on some rough cuts of electronics and guitar. For a while these efforts were on hold and unfinished. But recently Stephen was brought in later to record vocals, percussion and bass to complete the tracks. Indeed, he seems to have relished going back to the bass guitar after along time away from the instrument.

Clinker, “stony residue from burnt coal”, begins with the pulsing sound of Camouflage. Though the treated voice and tense electro combination shares some similarities to Wrangler, Julie’s guitar work gives it a whole new edge. There is a spinetingling intensity here that is entrancing and gets Clinker off on the good foot. A disjointed introduction to Monochrome then flutters into view, which eventually yields to a claustrophobic momentum with austere synths easing the way. Included is a palpable sense of angst, which thrills and chills to varying degrees. In an odd way this number is even quite catchy in a relentless, pummelling fashion.

Influx then presents itself as downbeat electronica and Julie’s voice makes an effective showing here, as her guitar jitters alongside. It playfully comes close to funky and blues elements, but always keeps just far enough apart to retain its own identity. This is all underpinned by rock solid bass moves. Then we come to Signification, with machine buzzes and a frantic rhythm pattern that is ever upping the tempo. The vocals distort wildly and the feel reminded me somewhat of one of Cabaret Voltaire’s more outré workouts. Brakes are briefly applied to the sound, before the beat picks up to conclude the piece.

A sparse electronic dance shuffle greets us on an oppressive Condition Collapsing, with both Stephen and Julie working well in tandem on vocals. But this is as far from a conventional duet as it could be! Even so it very addictive and inventive, with purpose but also a real sense of mystery. The last offering on Clinker itself is Dereliction Magical, where the strengths that Campbell Mallinder Benge have displayed throughout Clinker are brought to bear in what is almost the mini-LP’s pop song. It is a true ace of a track that provides a fitting finale to what is a set full of vigourous energy and imagination.

But wait. As well of the six tracks of Clinker itself we also get two extended remixes apiece of Dereliction and Camouflage, with Gabe Gurnsey and UXB (Pete Morgan) doing the honours on the former and the latter respectively. Dereliction (Phase 1) starts this part of the CD and here Gurnsey gently teases out the intro until the listener is left with an electronic spiral of sound. The voices wobble in and out as we are presented with a scant but very hypnotic musical landscape.

On Dereliction (Phase 2) things shift up a gear and this mix moves towards a solid dance music direction, with just the right rhythm to make one want to get a groove on. We then come to the two Camouflage remixes Pattern 1 and Pattern 2 by UXB. Pattern 1 concentrates on seeking out the electro dance elements of the track and does this elegantly, with Pattern 2 having more of a chill-out feel initially. After this cool drones eventually lead to some thumping percussive beats. All these remixes here do well in zooming in on different emphasises to the original tracks and are different enough to add to the disc as a whole.

In summary Clinker takes us on a musical jaunt that has as its basis some familiar themes from the makers’ past works, which are then warped into different and often alluring directions. It is a testament to the talents of all three of Campbell Mallinder Benge that this doesn’t feel like just a side project – it certainly isn’t a case of “this will do until the next LoneLady or Wrangler LP”. The record carries a sense of commitment and completeness which is extremely satisfying and very listenable, as Julie, Stephen and Benge all step forward shine brightly. Clinker ultimately captivates.