Camp Bestival is a family festival held in the grounds of Lulworth Castle in Dorset.  Curated by Josie and Rob Da Bank the festival is built from the ground up to meet the needs of younger festival goers.  Louder Than War’s Alan Ewart went along to this years festival, held between 30th July and 02 August, to check it out.

If you are a regular at music festivals then you will undoubtably have your favourites.  Perhaps you return to the same festivals year after year as I do, but maybe you are looking for something new to try out.  Maybe you are one of those who loved festivals when you were younger but it all dropped by the wayside as you got older, got married and had kids.  Perhaps you have never tried a festival but would like to and you’re worried as to whether or not your kids will find enough to keep them entertained.

If you fit the mold for any of the above then hopefully you spend a little time researching what might suit you and your family.  Hopefully that research goes a bit further than just looking at the headline acts and the location of your festival . If you don’t then perhaps this report will help you out with any questions you might have, at least about Camp Bestival.  Lets start at the beginning.

Camp Bestival is located in the grounds of Lulworth Castle in the heart of the Dorset countryside.  The location is both unique and stunning, It sits in a valley on the Isle of Purbeck and the views around the festival are incredible. Amazingly this year is the first time I have visited the festival, despite it being right on my doorstep.  Camp bestival is just a 15 minute drive from home.  I could easily have travelled daily but decided to take the van and camp so that I could report on the full festival experience.  The sacrifices I make in the name of art!

I drove over to the site early on Friday morning and found my way to the camper van field very easily indeed.  The approach to the site is well sign posted though the one way system did take me down some little roads I didn’t even know existed.  Getting on to the site was really easy, totally painless, no long queues, no waiting around and a nice flat van field.  Perfect. 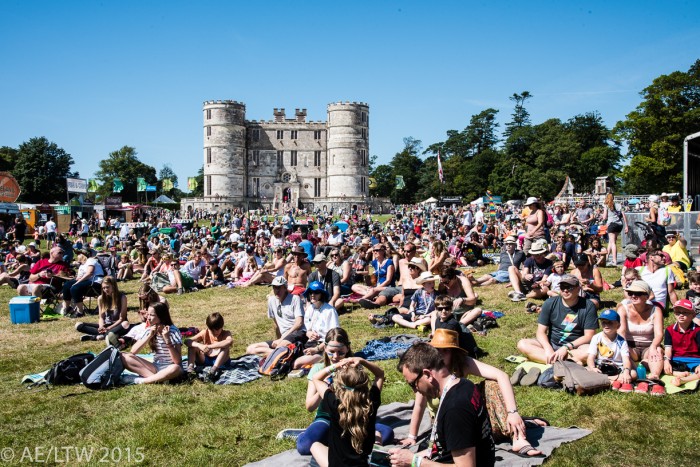 Likewise picking up my press and photo pass, quick, efficient and painless.  The walk from the field I was in was around 15 minutes to the arena and this being the Purbecks there were a couple of hills to contend with.  That said the main camping fields and the other campervan field are much closer, just a few minutes walk.  The field I was in was added to accomodate the growing numbers of festival goers who have recognised that a camper van makes the festival experience even more pleasurable.  The festival even runs a a “festaxi” land train to transport people around the site.

Now let’s be clear about something.  Camp Bestival is NOT a ‘family friendly’ festival.  It is much more than that. This is a festival built from the ground up to meet the needs of families.  The emphasis is on children and on making sure they have fun.  The range of activities for the kids is mindboggling and this means childrens entertainment on the main stage.  Dick and Dom, The Cat in the Hat and Mr. Tumble all have main stage slots.  This means that families camp at the main stage lawn.  There are tents, trollies, brollies, chairs and pushchairs everywhere sometimes even right at the front of the crowd.

Speaking briefly about those trollies, they are the one negative thing I have to say about this lovely festival.  Don’t misunderstand me, I totally understand why some people need to use them.  A family with several very young children has a lot of stuff to carry and without a trolly life would be incredibly difficult for them.  I don’t actually object to them.  However!  I do object to the extremely stupid people who park a young family right at the front of the main stage, practically on the barrier and then decide, ten minutes into the Kaiser Chiefs set that it is time for little Tarquin to go to bed.  The same idiotic people then get shitty with everyone around them because they cant get out of the 20,000 strong crowd.  It is stupid, it is inconsiderate and worst of all it is extremely dangerous to everyone around, including your children.

I can only assume that the guilty parties, and there were many of them, are either completely oblivious to everyone around them, totally inconsiderate or terminally stupid.  The festival could address this dangerous practice by insisting that those with trollies stay to the rear of the sound desk, at least once the main stage childrens entertainment has finished.

Lets talk briefly about what is on for the kids.  In short everything you could imagine and more.  From an insect circus, to fun science presentations, to Bill Oddie’s introduction to bird watching, to a funfair to a mother and baby chill out area Camp Bestival really does have it all.  There are fairy tales with Mr Nice, Carnival parades, the Alex Rider spy school and even a Llama agility course!  Seriously, with real Llammas.  There are woodland walks, lakeside picnics and the National trusts Giant Den Building.  The scale of entertainment for kids of all ages is truly mind boggling, I couldnt even begin to cover it all here.

Of course this is a festival so, for many, the music line-up takes centre stage.  Both Camp Bestival and it’s bigger sister, Bestival on the Isle of Wight, aim to provide something for eveyone.  The music line-up is always eclectic.  For example the Saturday line-up this year included X-Factor contestants “Only The Young” (loved by the kids hated by me), Kaiser Chiefs and techno legends 808 State.  The truth is that you won’t like everything on the line-up but you will find something you love.  Who knows you might even find something to love that you would normally avoid like the plague.  I did!

My big discovery was urban rapper poet George the Poet.  George is a 24-year-old from London who raps his poetry to a the backing of a live band.  Normally I absolutely detest rap music largly becasue the ‘songs’ tend to be full of foul language and are demeaning to women.  Most rap music I have heard tends to be from American artists and it doesn’t ‘speak to me.’  George was very different.  His lyrics are full of positivity and inclusivity whilst still putting over a political message whilst challenging racism, sexism and inequality.  This young guy held me absolutely spellbound.

The atmosphere at Camp Bestival is absolutely unique.  The soundtrack is that of children, and most especially of childrens laughter.  Everywhere you look you see families, three generations together relaxing and having fun.  There are no bands of feral youths drunk, high and hunting in packs.  There is late night entertainment, primarily in the form of silent disco’s until 3Am but expect to see streams of young familes heading back to the camp sites at 10.30 as the younger kids get grouchy from tiredness.  This is a festival for families, not for late night wild parties.

Camp Bestival is fantastic at what it does.  It knows it’s target audience and it caters for them brilliantly.  There is most definitly room for a festival like this on the circuit.  The kids that you are tripping over here are the festival audience of tomorrow.  I applaud Josie and Rob Da Bank for their foresight in putting on an event that plugs this hole in the market.  The fact that weekend tickets sell out in a 30,000 capacity event in rural Dorset proves that there is a need to be met.

I wonder if the festival should sell a “holiday” ticket allowing families to camp onsite and then spend a few days exploring the area around the festival before the entertainment starts.  I spoke to folk that had travelled from as far away as Edinburgh for the festival so I think there would be market for an extended stay.

The music line-up had something for everyone.  My personal highlight was a Sunday afternoon set by Slaves.  I have seen these boys several times this year and they never disappoint.  Other highlights included Buzzcocks, Alison Moyet, Level 42, the Shires and Eliza Carthy but the prize for the most jaw dropping and bizarre performance of the weekend has to go to the Crazy World of Arthur Brown.  The “God of Hellfire” put on a show so wonderfully wacky that it has to be seen to be believed. 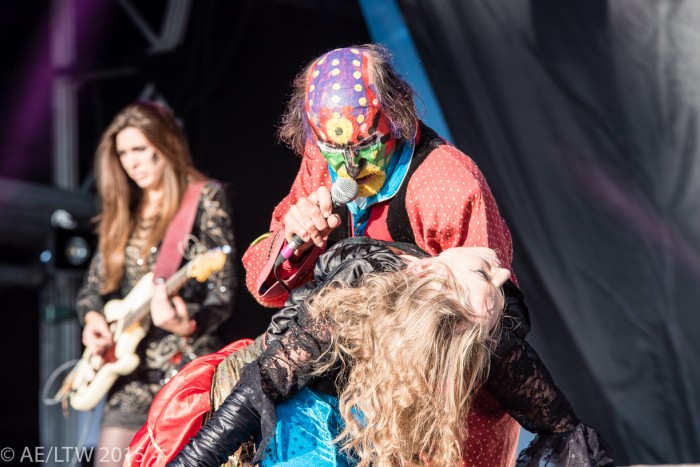 I really enjoyed my time at Camp Bestival and the experience was made all the more pleasurable by the team from from Get Involved who ensured that everything for the press on site ran like clockwork.  The team were superb both before and during the festival ensuring that all the information needed was readily to hand.  They truly do a fantastic job.

Camp Bestival is incredible at what it does.  It is so good that even children singing “Jingle Bells” at midnight or playing football outside my van at 6.15 am couldn’t spoil it for me.  I highly recommend it, the only thing is you  might need to borrow some kids if you are to get the most from the festival.