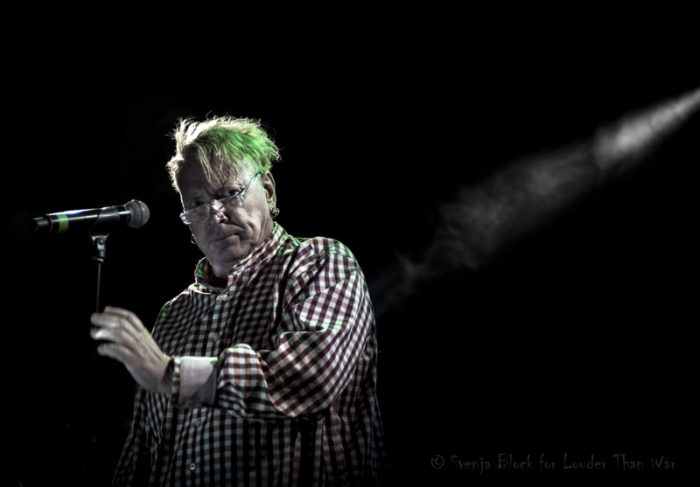 Camden Town in North London played host to 200 bands in 20 venues during this years annual Camden Rocks Festival event. Keith Goldhanger limped around watching as much as he could whilst Svenja Block ran around and took the photos.

Camden Rocks Festival 2018 does have a habit of reminding us how old we’re all getting. John Lydon is now behaving like our grumpy granddad, swigging brandy and peeping at us over the top of his reading glasses making sure we’re still paying attention. At times it seems as though he’s making up new versions of his own songs, mumbling incoherently over the top of the fabulous music that complements his voice but still belts out the howls and expletives when it matters with great gusto.

Towards the end he advises us that the four piece are quickly nipping out for a fag, returns to the throng to end the show and for a few moments we wondered if the day was going to end with a whimper that would not have seemed right after hours of loud crashing head nodding entertainment fuelled by gallons of alcohol and broken guitars.

On the band’s return after an awkward few minutes and following the classics already played (Rise, This Is Not A Love Song, Flowers of Romance…) we’re treated to Open Up and of course Public Image Ltd. Everyone seems to leave happy enough but any big messy endings can be left for others. The night was still young and later on we would end the night dancing with big bears and watching the vocalist of Saint Agnes lying on the wooden floor of Dingwall’s Canalside bar motionless, covered in beer and sweat and having to be helped up by those left standing in the bar. 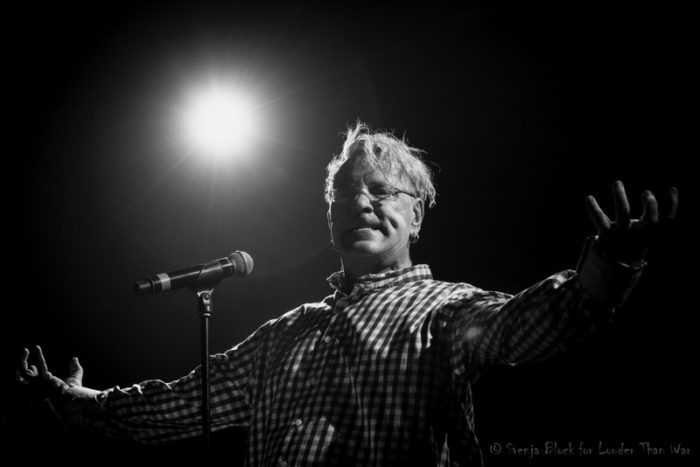 Those of us in the audiences today are no spring chickens either as we crane our necks, complain about our knees, reminisce about uni days, sixth form, that afternoon at Glastonbury when the band we’re about to see had mud, bottles and deck chairs thrown at them and wonder whatever happened to that bloke called Clint. Earlier in the day POP WILL EAT ITSELF dad danced for an hour, jumped up and down and gave everyone in the room the nostalgic thrill we hoped for when we arrived. Nowadays with Mary Mary from Gaye Bikers on Acid at the forefront (alongside Graham Crabb) we’re reminded that THIS is the future now. Not hover-boards and flying cars….just Pop Will Eat Itself at the Camden Underworld still playing the same songs and making us smile. The Poppies are sounding heavier than they’ve ever sounded, they’re still having a laugh, travelling around the world and pulling in the fans (and their fans children) from their past. They succeed in maintaining the pace they set at the beginning of the hour right through until the end. Every song a crowd pleasing reminder of the past and very entertaining to watch. The songs haven’t changed much, the line up has a little but the attitude and approach hasn’t. It can be odd sometimes seeing recognisable faces twenty years later, still standing on stage and jumping up and down very much as they used to. One or two of us around here never could jump around like this even back in the 90’s (or was it the 80’s?). 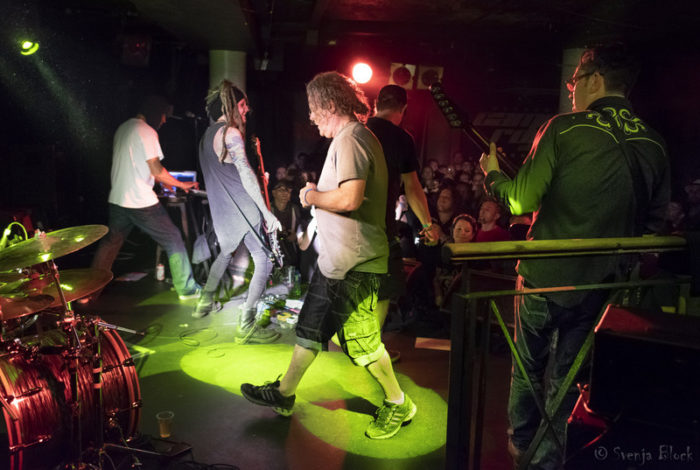 THE PROFESSIONALS treat us to some old and new rousing tunes. There’s a huge audience in front of them and they’re being embraced like long lost friends as they serve up tunes some of us may have forgotten about (some of these tunes such as Silly Thing are now over forty years old).

Punk Rock, Soft Rock, Heavy Rock, Psych Rock, Indie Rock, Pop Rock….we’ve got it all here today. 200 Bands, 20 venues, loads of attendees holding at least one pint in their hands except when dashing from venue to venue all with a plan. A plan to catch the old, the new and to fill in the gaps with bands they may not know anything about.

Camden Rocks Festival 2018 this year gave us the chance to see bands such as PIL at the 1100 capacity Electric Ballroom, PWEI across the road at the Underworld, TOWERS OF LONDON at the Monarch, BLACKWATERS in the tiny Crescent Coffee Bar and BRITISH SEA POWER at Dingwalls all in one sitting. A small list of bands we like to see at events such as this when some of us maybe wouldn’t have ventured out to catch up with if playing an exclusive show on a Tuesday night.

BLACKWATERS must surely be a band that 99% of Camden Rocks Festival 2018 attendees should catch up on before the next event comes along though. This is a band that has one (foolish) punter getting so excited he puts his fist through a glass lampshade that was hanging from the ceiling. The floor is covered in Blood and broken glass and it’s a shame that happened. If this event is six or seven acts short next year it’ll be because of one blood stained bloke who we hope was at the end of a broom whilst we were ushered out onto the pavement after the gig. This small room is as raucous as any room we find ourselves in all day and the tunes….. thrilling, fast snappy short songs that are full of catchy choruses that need to be heard by more people. We’re sure this will eventually happen. Blackwaters are one of a few bands now that get this right in 2018, you already know about the others.
This was a festival without Idles (but they’ll get a mention anyway), one of few festivals this year that the Bristol band are not attending. This is a shame as Idles are surely the band at the moment that fit this genre of music in 2018 more than any other. Blackwaters have more than made up for this exclusion. 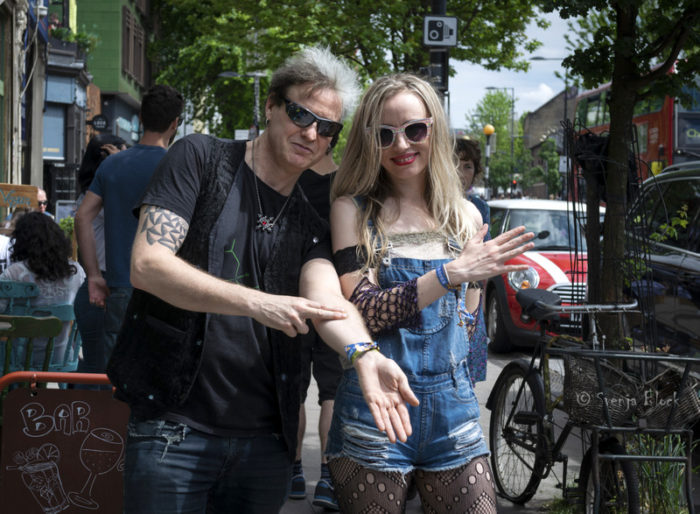 HEALTHY JUNKIES have a big audience inside The Black Heart during the early hours of the evening. THE RAMONAS at The Dublin Castle had an early queue of punters queuing at the door before the clock has even struck 12 (noon), ASYLUMS over at Belushis are causing mayhem amongst the hot sweaty attendees that are struggling to fit inside the building and ELIZA AND THE BEAR are keeping their dedicated throng of young fans happy over at KOKO. Some of these bands are playing smaller shows than usual today however many are playing in front of larger audiences than usual. A decent trade off.

BEATSTEAKS from Berlin are going down a storm in front of a big crowd that are arms aloft and screaming for an encore even though PIL are due to follow and reports come in of equally successful shows by old favourites Echobelly, Blood Red Shoes and many other bands on the poster that a fair proportion of wristband holders seem to have equally distributed themselves around during the day.

BRITISH SEA POWER at Dingwalls are the only band to have a couple of large bears for us to dance with. We suggest this is a fair bet – we didn’t check with anyone else and once we’ve caught the last few songs, ventured upstairs to witness the last crashing notes of Saint Agnes some of us feel we need to call ita day.

People are still walking around the High Street as the clock strikes midnight; queues are forming outside some of the venues we’ve been dashing in and out of all day for a second sitting of party people, drinking buddies and those who would rather dance to the recorded versions of some of the tunes we’ve been hearing played out live since we arrived late morning.

Camden Town on a Saturday night is buzzing with music lovers and on this Saturday night some of these folk have had a 12 hour head start. The Hawley Arms is still selling beer, The Good Mixer has been hosting bands all day and appears the same as it was before it reopened recently. 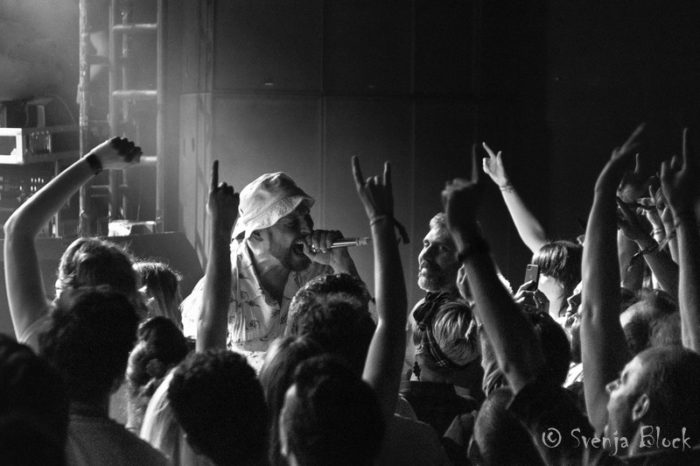 For some of us however, (probably the same age as some of the bands we’ve been catching up with) it’s time to walk sheepishly to the tube. Ignoring invites of more expensive lager and getting annoyed that these pubs didn’t seem to be open as late before our ankles started giving out after a dozen hours of experiencing some of the above.

Pubs everywhere, bands everywhere, beer everywhere and tubes running all night. Camden Town has consistently been a location for any band to head for over the years and today is no different. This place has always been the home of Rock. There are some terrible bands out there though, it’s not all perfect but look around hard enough and you’ll find plenty of acts you’ll love that your mates might not like and some terrible bands some of us will love that you won’t.

They’ll all get to play a gig here one day. Whether they’re old new, rising, falling, on days like today or during a wet Wednesday night.

Camden Rocks Festival 2018 all the time for some people. Today was much busier. Next year could be twice as busy if organisers make it a two day event that has been suggested.

A year for one or two of us to start getting fit again. 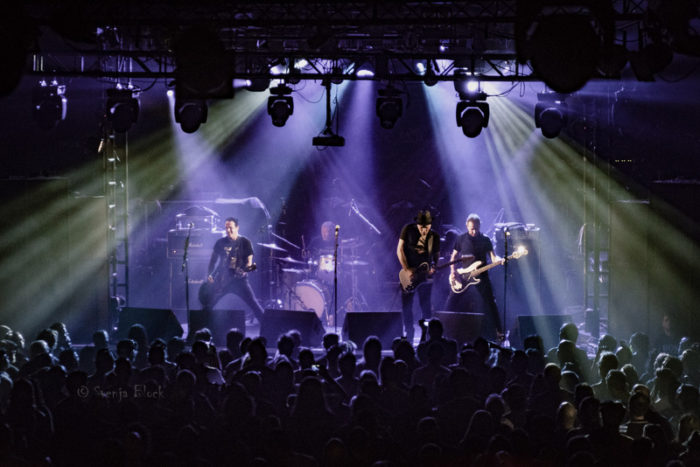 All words by Keith Goldhanger.   More writing by Keith on Louder Than War can be found at his author’s archive. You can also find Keith on Facebook and Twitter (@HIDEOUSWHEELINV). You may subscribe to the Goldhanger Shorts Facebook page or browse some of his photos too if you so wish.