Saturday saw thousands line the streets of good ol’ Camden town. However, it wasn’t any ordinary day, while punters crammed into the markets, queues formed around ‘The World’s End’ pub as fans eagerly waited to pick up their wristbands for Camden Rocks.

Each year, the one day music festival gets even bigger and even better and 2016 was no exception. From The Black Heart, to Barfly, Proud to The Electric; pretty much all of Camden’s venues were opening up their doors to host artists new and old for a festival that covered a lot of different sounds.

The great thing about Camden Rocks is that there’s so many different ways that you can experience it. You could spend the whole day watching entirely new acts or just stick to seeing acts that you know. There’s such a variation and huge variety of choice that those attending the festival could experience it in their own personalised way.

The line-up was pretty impressive feature everyone from The Cribs, Billy Bragg to The Tuts, Yuck, Heck and so many awesome people that if I mention I’ll just fill this review with names.  Now it would be impossible to try and write about them all, however, I will write about my highlight performances.

First up is Evil Scarecrow. I remember watching them when they first started performing and seeing them this weekend was fantastic. Despite being on at 1.30pm, they totally filled the Electric Ballroom and it’s not easy to see why. The band mixed comedy and metal together to get the most bizarre and awesome result. 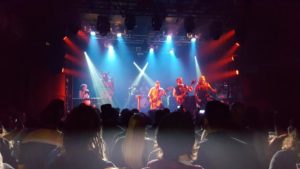 Their stage props included a giant crab robot, an anti-gravity machine (of sorts) and army girls that threw party poppers into the crowd to make a bang for the band’s song about war. At one point they even got the crowd to ballroom dance. Yes, ballroom dance at a metal show. If I ever have a party I want Evil Scarecrow to play it, seriously.

Another band who were seriously awesome were ‘The Men That Will Not Be Blamed For Nothing’ – try saying that after a few beers. Having just returned from their American tour, the band were in top form and played to a pack out Proud Camden.

If you’ve never seen these guys before imagine a steam punk band that sing about chimneys, gin, mix it with comedy and a lead singer that plays the saw… THE SAW! In my opinion more people need to play the saw. The show was awesome especially when guitarist, Andrew, explained how he had his amp stolen by some crustiest then found it when he went shopping in Sainsbury’s and saw that they’d been kicked out of their squat across the other side of the road.  But seriously though, check these people out, you won’t regret it. 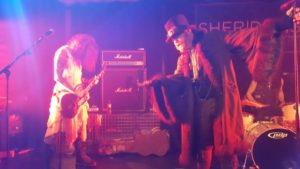 Someone else who really impressed me was the brilliant Ginger Wildheart. The man tours like a machine so I wasn’t surprised to hear that he was playing three sets at the festival. Wildheart fans packed into Proud to catch his slightly drunken last show and he was so on point.

Everyone sang along as he played acoustic renditions of tracks from Hey Hello back catalogue as well as his own solo material.  Ginger finished ‘Suck Punch’ and offered someone to come on stage to play drums. However, it was his backing singers who saved the day when she took her shoes off and got behind the kit. The crowd went mental, good on you grrrl!

The only thing that I will say was that this festival is not for those that struggle to deal with crowds and small places. As you know, Camden is busy at the best of times, so Camden hosting a festival was rammed. Moving in and out of the venues could sometimes prove tricky, but too be honest that’s just all part and parcel with the spirit of London.

Overall, the festival was a huge success and many walked away with a smile on their faces and a stagger in their step. If Saturday is anything to go by, Camden really does rock.