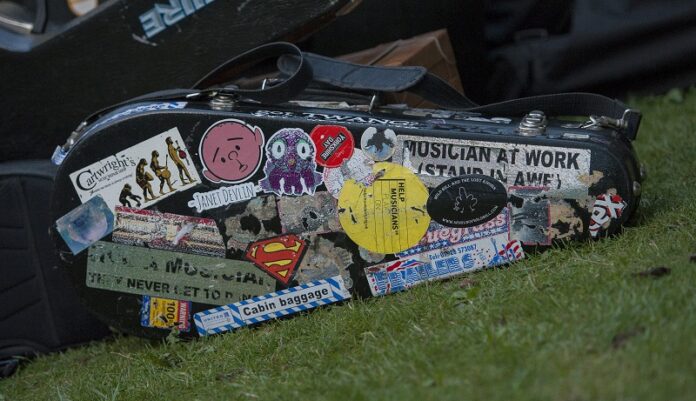 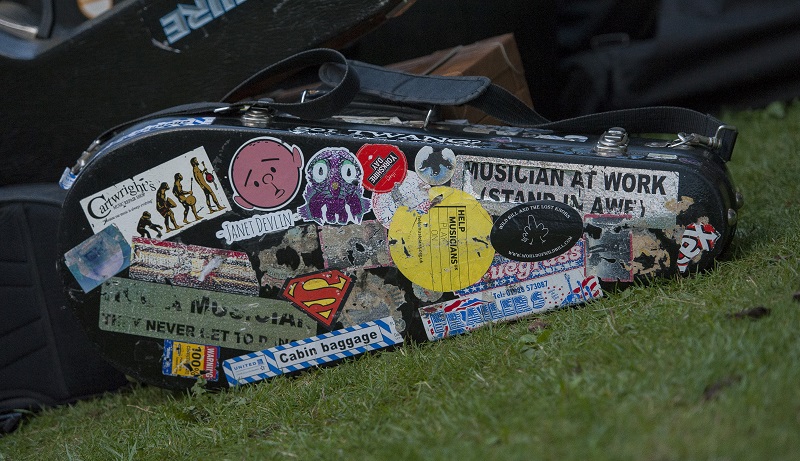 Cambridge Folk Festival – having reached the 50th anniversary milestone in 2014 – goes on from strength to strength. The 51st event of 2015, similarly a sell out and labelled ‘the Glastonbury of the folk calendar’, although rooted very much in its folk traditions, has enough of an edge to deem it worthy alongside its controversial cousin once removed.  In the first of two parts, Mike Ainscoe looks at this year’s festivals in words and images.

Where Glastofans can debate the worthiness of Kanye West and a welly booted Shirley Bassey until the cows come home, Cambridge embraces a less  contestable yet challenging enough level of  diversity in the likes of Passenger and alt folkie Frank Turner (Sinead O’Connor and Van Morrison last year). Clearly rooted in its folk origins, with the peerless Joan Baez as the 2015 figurehead/headliner (figureheadliner maybe?) and appearance by possibly the grand old lady of folk, Peggy Seeger, the presence of a rich variety of international artists and an vast additional non-musical programme gives Cambridge its elite status.

It may not demand the frenzied high profile media coverage which Glasto does, but the radio and TV planners clearly appreciate the ‘small in name, big in status’ reputation, affording  it the honour of live broadcasts from the site alongside exclusive performances and content. Plus  the ubiquitous Mark Radcliffe at the spearhead, prepping links for the soon to come Sky Arts coverage.

The nationalities and styles continued to be dominated by the English and of course the Irish and the Scots – Scotland at Cambridge is always a strong feature with many of their artists bagging closing slots on various stages. Of course, we had the Americans coming, with everything from country and bluegrass to more rock based bands and even a growing Aussie influence in this Ashes summer. This year’s festival offered up the same sort of timetable which requires military style planning to manoeuvre around the site to catch something of everything musical, not to mention the shedload of arts and crafts going on at different locations.  Look at Friday for example and at around 5pm you could see the dynamic John Butler Trio on the main stage, Skinny Lister on stage two or the impressive India Electric Company in the Club Tent and that’s not even considering what’s going on around the grounds. Something always has to give. 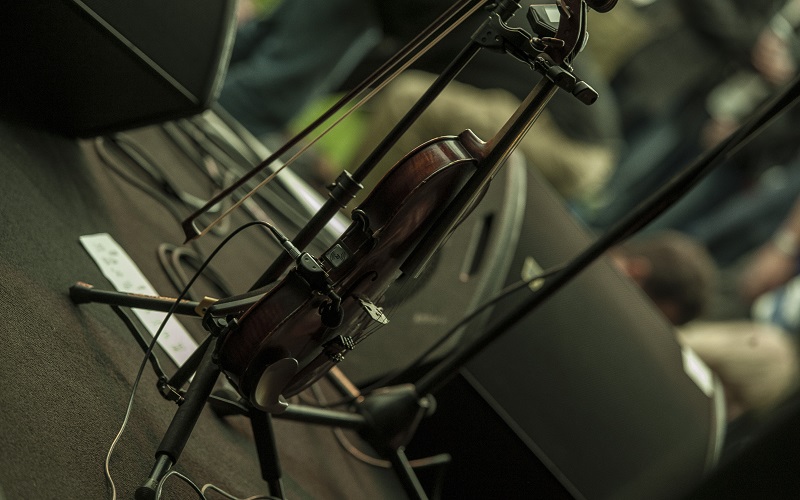 A relaxed first evening with no headliner on the main stage yet a healthy crowd gathered in the arena at the brink of a magnificently sunny weekend to pack out the minor stages for the Thursday evening ice breakers.  Where Skinny Lister (more of them later) literally took the stage by storm last year, this year seemed much calmer and refined with The Jaywalkers offering up a pleasant and friendly curtain raiser  followed by an exquisite set from Hannah Sanders accompanied by The Willows’ Ben Savage who certainly got around during the weekend. Sat crouched side by side as they delivered Dylan’s ‘Seven Curses’, you got the feeling that the first highlight of the weekend had arrived.  Mawkin, with a new album recently out and with Saul Rose adding a weighty folk presence in depping  for Nick Cooke,  turned the volume up. The Delarre boys breaking the folk rock duck for the festival as a precursor for some higher volume and energy performance over the weekend, while the first surprise package came in the form of Scotland’s Elephant Sessions. Scotland usually has a healthy presence at the festival, yet the unusually named quintet, labelled as ‘neo trad’ with their mandolin and fiddle complimented by drums and bass and Mark Bruce’s shiny new red guitar amp was a bit of a revelation. Perfect for those who like some drums in their jiggery folkery – think Flook and Kan and you’re in the same ballpark. A band whose music fits the ‘thumping groove’ description perfectly, they got the first label ‘infectious’ of the weekend. 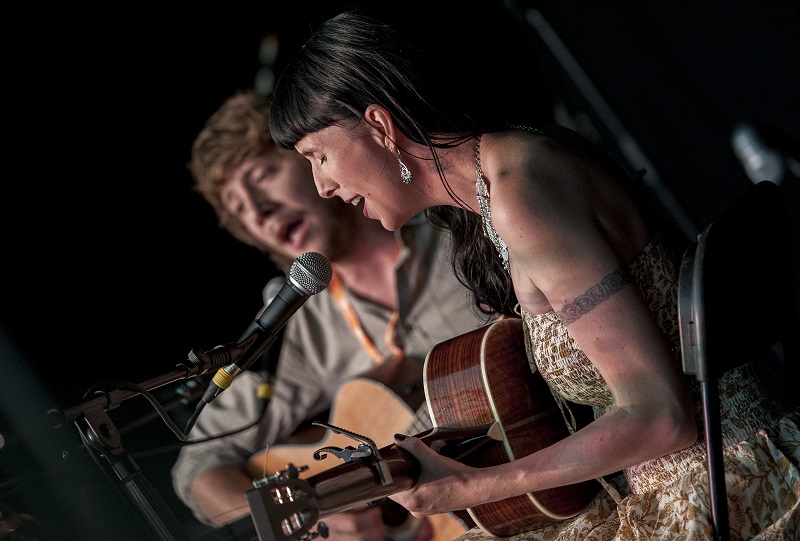 Dodging Granny Turismo on the lawn – three shopping trolleys all pimped up to provide a bit of street theatre in the form of synchronised trolley dancing, you could find some of the slightly bigger boys and girls over on Stage Two included Folk Awards Best Duo, Ben Walker  and Josienne Clarke making the first of two appearances of the weekend, and adding strings and journeyman double bassist John Parker to their ‘duo’ line up. A pair who embody both intensity and calm; Josienne all concentrated and at one with her lyric while Ben is the epitome of serene, yet a pair whose stock and acclaim for their melancholic themes is on a high. On the other hand, the four girl line up of Norwegians Katzenjammer is a fun and light hearted diversion. A band best viewed by standing still and letting the girls come to  you as the instrument and position swapping jamboree which is their live show is visually mesmerizing as well as adding a nice live edge to their music. Yes it is part fun, in fact mostly fun and not really even semi-serious, full of light hearted and demonstrative posing, but at the risk of overusing the word, very infectious. 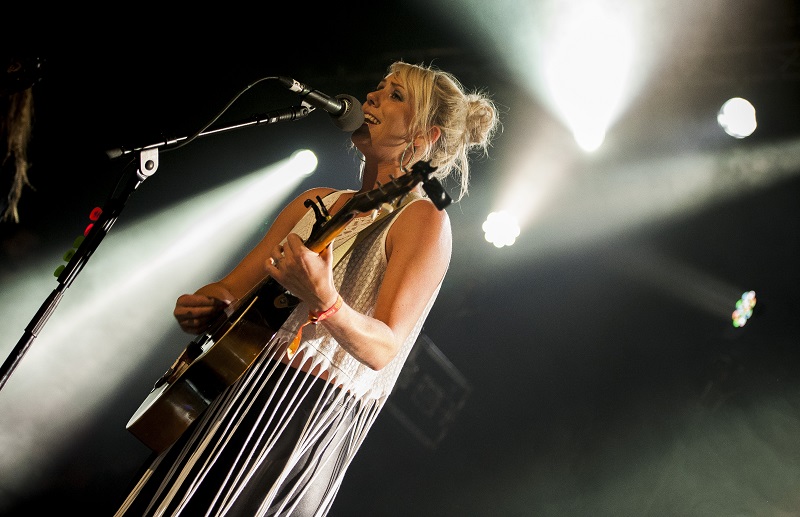 On what shall be known as ‘Frank Friday’,  when Frank Turner was all over the site added to an Ashes test match win – result!  The day started well enough meeting the man himself as he was about to take the stage for the MOJO interview with Colin Irwin who went on to grill Frank, not too deeply for an early Saturday morning (that was to come later on) from his origins and development and palaeontology, playing Download and Cambridge Folk Festival in the same year, to the life changing experience of opening his ears to Iron Maiden at the age of ten. He talked about the impact of Springsteen and the ‘Nebraska’ album on his own songwriting although was less complimentary about Dylan. Yes, it had some light hearted moments – his Wikipedia entry noting him as the singer in Yorkshire new wave of British heavy metallers Saxon, yet he also touched on what he called his “drink and drugs fuck up” at the end days of his hardcore punk band Million Dead. His majorly angry days may be over yet he still retains the passion within a cooler and relaxed outlook. The chance to take crowd questions meant that the Frank brigade could broach whatever was burning a hole in their heads rather than the safe options. Talking of which…later in the afternoon, Kerrang! Journalist Ian Winwood, perched on a stick and branch crafted throne in the flower garden was a little bolder in his questioning. Having done the round of promotion with Frank for his autobiography, his familiarity allowed him the privilege of asking Frank about the most fucked up he’d ever seen on stage which seemed in total contrast to the peaceful surroundings. For the record, it was in Manchester; dropped his plectrum and took him three agonising minutes to pick it up. 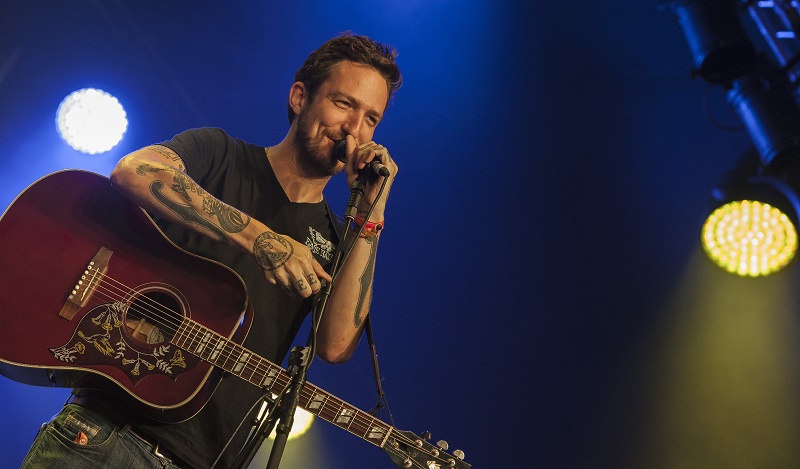 Add to this a session at the MOJO signing tent where everyone in line got a hug, a photo opp and asked “tell me your name” so he could do a dedication, plus a gig and you know why he’s worthy of the ‘hardest working man in showbiz’ tag. Accompanied by an acoustic guitar and Sleeping Soul Matt Nasir, the passion and enthusiasm you couldn’t fault along with the chance to play whatever he liked not restricted by setlists or expectations. Early evening and an early contender for the young person’s vote for festival highpoint but whatever the view, the sort of personality Cambridge needs.

In other news…although The Proclaimers took the headline slot with their well established yet slightly worn act and the fact that the close brothers tend to stand so far apart on stage that you’d think they were at loggerheads, the crowd did seem quite taken with Nick Mulvey and his colourfully lit chilled out groove. The combined Celtic one-two of another strong member of the Scottish contingent in Rura plus, Irish instumentalists Altan alongside the Italian pizzica set from Canzoniere Grecanico Salentino and the classy country leaning and y’alls from the spectacularly red booted Angaleena Presley gave quite an international feel to Stage One. However, it was left to a healthy slab of good old British R&B from Wilko Johnson, his trials and tribulations well documented as well as his association with the local Addenbrookes hospital  adding an extra emotional dimension.  He gave great value with his ‘power trio’ of Dylan Howe (bringing the average age down a bit) and the hugely entertaining Norman Watt-Roy and a stomping set of quality with which he’s earned his reputation. 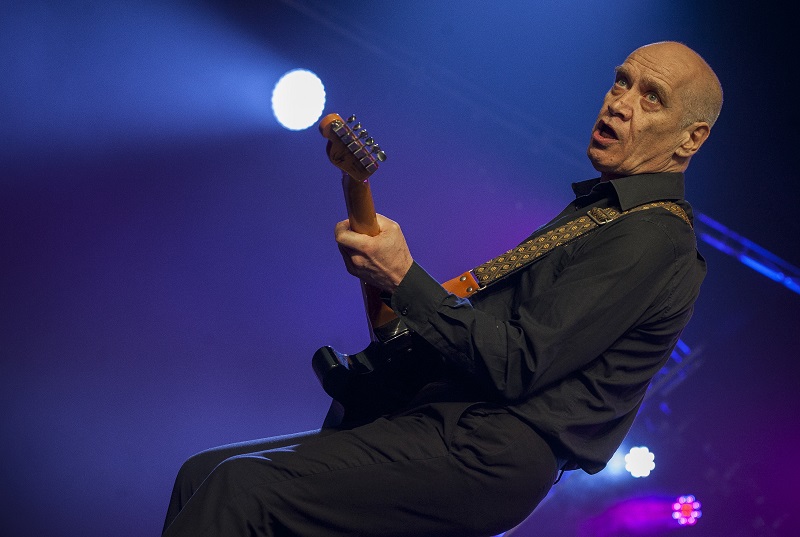 While Peggy Seeger might earn the ‘veteran’ status, fellow American Chris Smither might in comparison be  a spring chicken. Part of the strong American contingent, Peggy failed to be anything less than totally endearing. She appeared at the very first festival and still has so much to say and to sing that’s it’s quite humbling for anyone in the same room. Her songs and stories added to her appearance with Colin Irwin on Saturday  gave enough copy and quotes to last to the next festival. Backstage at the Club Tent it was similarly endearing to see her plated snacks  – a paper plate cling-filmed with two bags of branded crisps (or potato chips) – no fuss and nonsense, notable in a time when many musicians supposedly  further up the tree demand extravagance and indulgence that she remains so humble.

What starts to become apparent at this stage is the dilemma of trying to skirt round the site to catch as much as possible or staying in one spot and taking your chance with what’s on offer. Always a tricky one. It means that the likes of Hattie Briggs and Ward Thomas away from the main site and out in The Den rely on the good folks who forsake the headliners and commit to seeing musicians on their way to those far off places. Similarly the Club Tent which still attracts some high profile names such as second sets from Josienne and Ben and stalwarts such as Brian McNeill (the most booked performer ever at the festival)  and the showcase acts such as the impressive Sam Kelly Trio who were the first of the five on show this weekend. The intimate space and closeness of the audience arguably produces a better atmosphere particularly for those who like their music a little more robust and driving.

One band not to miss and luckily they were playing four sets during the festival, were French Canadians De Temps Antan – yet another inspired set of ridiculously talented musicians, full of joi de vivre and perhaps the most infectious of all the infectious outfits over the first two days. Their two adrenaline charged Stage Two sets were impressive enough to warrant seeing how they’d do on the main stage and also in the Club Tent…stay tuned for Part Two of the round up to find out how they fared.

All words and images by Mike Ainscoe. You can find more of Mike’s writing and photography on Louder Than War at his author’s archive and his website is www.michaelainscoephotography.co.uk