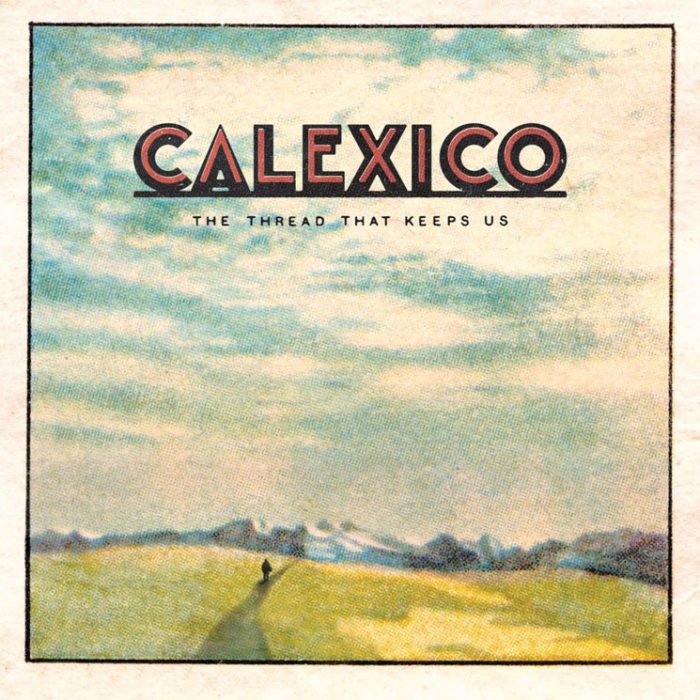 The Thread That Keeps Us

On their ninth album, Calexico place their songs within a conceptual American wilderness. They are spacious, potentially lonely and fragile songs. Within that spacious feeling, there is also the ability to get pleasantly lost. There are shards of optimism too, occasionally putting the “I can” into essentially-morose Americana.

There’s a duality in the title, looking both at how life is precarious and how love, be it friendship, family love or romantic love, can nourish and help us endure when life tests our resolve. Joey Burns describes the closing track, Music Box, as a “Love song for [his] kids.” After fourteen tracks with titles like Under The Wheels, Bridge To Nowhere and Dead In The Water, he reflects on how at the end of a day, you can forget the vicissitudes of the wider world when you put a child to bed and look at the life, light and hope in their eyes.

Even the location of the recording, Panoramic House Studio in North California, sounds a tad post-apocalyptic. Built from debris and salvaged timber, the building was dubbed ‘The Phantom Ship’ by the band. No surprise, then, that they open with End Of The World With You, which contemplates the essential role of “Love in the age of extremes.” The album is bookended with essential beauty and optimism. But what of the filling in this Scooby sandwich?

It contains frequently plaintive trumpet playing from the tear-jerking Jacob Valenzuela. Another Space implies that things can only get better, not in a cheery D:Ream way, but if we manage to exist in another place and time – so potentially never. Valenzuela’s work on Unconditional Waltz, one of several, restful instrumental interludes on the album, is surely worthy of the 21st Century movie reboot of The Waltons (that I’ve just made up, but which really needs to happen).

Dead In The Water is the most sinister track on the album, an ‘imaginary’ demagogue declaring, “I make the law and I decree a new kind of wrath.” Thrown To The Wild is the most bleak. Bus stations are existentially-challenging places at the best of times, but the one in this brings feelings characterised by chaotic instrumentation in the song’s second half, as well as the dying guitar howl at the end.

I guess we’re going to get albums like this from bands of all ages and genres whilst the leader of the free world is a cartoon character, ready to yell “That’s All Folks!” at the end of his final Looney Tunes Political Tourettes sermons. If we are led to question the security of today and the world we’ll hand on to the next generation, then Calexico’s contemplative and apprehensive tracks can only help us to navigate through the wasteland.

I need a drink now.

See the video to End Of The World With You here: