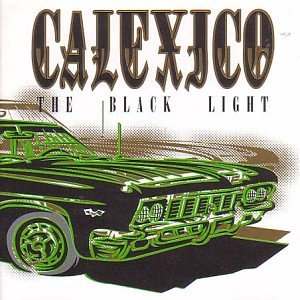 It’s hard not to delve for the clichés when considering Calexico’s signature sound. Based close to the Mexican border in Tucson, Arizona, they make music so redolent of its place that you can almost smell the tortillas, taste the chillis and see the cacti beneath a burning desert sun.

Drums pitter-patter like desert rain and percussion instruments rattle and hum like small reptiles scuttling across the rocky landscape in search of sanctuary. Guitars twang, a carnival organ wheezes, and mariachi trumpets float in and out, adding a colourful Mexican flavour. This is, to cite another unavoidable cliché, widescreen music – a soundtrack for a roadtrip in an old car through Death Valley, perhaps, or for a yet-to-be-made violent western. A violent one, judging by song titles like Bloodflow, Gypsy’s Curse and Bag Of Death.

Calexico’s second album turns 20 this year and sounds as vital today as when it first arrived in 1998, the patina of nostalgia only adding to the appeal of its world-weary sound. Meanwhile, its lyrical concerns – preoccupied with crossing physical and metaphorical borders – have never been timelier as a river of refugees gathers on the western border of Mexico and the USA, held at bay by a tinpot dictator who wants to keep them out with guns and a wall.

Born when the rhythm section of Joey Burns and John Convertino left Howe Gelb’s band Giant Sand to pursue their own cross-cultural path – similar to the one being pioneered by Los Lobos – The Black Light was a turning point in Calexico’s nascent career. It introduced new elements – mariachi trumpets, Latin rhythms and pedal steel guitar – to their dusty desert sound, creating the hybrid that would become their signature.

This limited edition release includes extensive liner notes by the band’s central duo of Joey Burns and John Convertino, as well as alternative artwork by Victor Gastelum. “I’ve enjoyed revisiting The Black Light and finding old sketchbooks from 20 years ago. The room sound and space in the performances remind me of the wide open feeling I had when first arriving to Tucson in the early 1990s,” writes Burns, reflecting on the album today.

“It’s a beautiful snapshot in time and place, and filled with heart. I always wanted to build a thrift store orchestra and this is the closest John and I ever got. A lot of it was made up along the way by assembling an assortment of sounds that turned into songs; some of which we exchanged over short but sweet phone machine messages.”

Convertino adds: “The Black Light is one of my favourites, maybe even my most favourite of all our records. It was the first one we did in the studio, and coming out of the band The Friends of Dean Martinez, it was a time of experimentation with a lot of new instruments and what we could do with more than just four or eight tracks. We put in long nights in the studio trying lots of different things out. I’m very excited that it has a re-release moment. I’m super grateful that there is still so much interest in the record – and the band – after 20+ years.”

The mostly-instrumental tunes on The Black Light – and its full-length bonus disc – share the same flavour while encompassing a range of styles. Sometimes they shuffle and sway with Latin rhythms, sometimes the reverb-drenched guitars twang while new accents – cello, vibes – bring some welcome shade to the parched template; at other times Burns’s parched, dusty croon tells tales that make you reach for the tequila and crave a burrito.

Listening to The Black Light is, as booklet author Wyndham Wallace puts it, like being transported into “a world where scorpions surround you as you struggle to find water among the vast desert landscape.” The title track leads the listener along down a dusty trail of charred intestate roads, whispered more than sung; while Missing is a moving ballad and Minas de Cobre is an instrumental whose mariachi trumpets imbue it with a yearning, painful melancholia.

Unique in their sound and their ambition, Calexico are not like any other band – and The Black Light, upon its original release 20 years ago, was not like any other record. That it sounds so familiar now is a tribute not only to its influence, but to the abiding success of its makers.