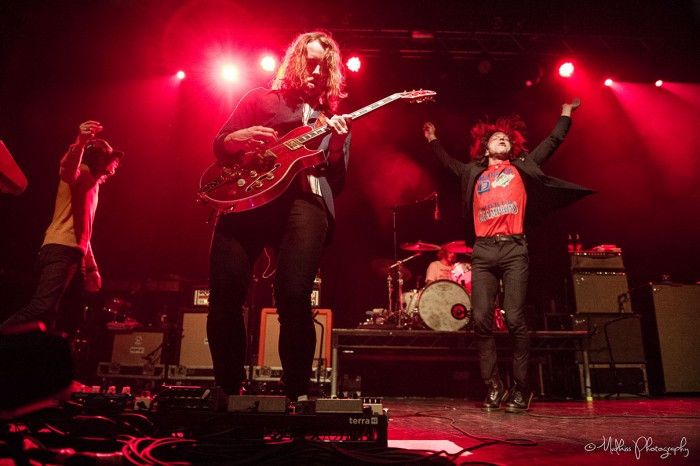 Rowdy Kentucky rockers Cage The Elephant bring their new album, Tell Me I’m Pretty, to Liverpool for a dehydration inducing sweat-fest, leaving some members of the crowd a little worse for wear. Louder Than War’s Davey Brett (words) went to check them out and Melanie Smith (photos) caught them in Manchester’s 02 Ritz.

Ever wonder how many songs it takes for Cage The Elephant’s frontman to jump into the crowd? The answer is two. Said second song is debut album track ‘In One Ear’ and as the opening seconds play out, the crowd explodes, with Matt Schultz bouncing around atop a turbulent sea of heads and shoulders. The band start as they mean to go on, no let ups. ‘Spiderhead’ races off the stage in an equally frenetic fashion, with one Schultz busting moves whilst another cranes over his guitar, clawing the notes out of it like a man possessed. 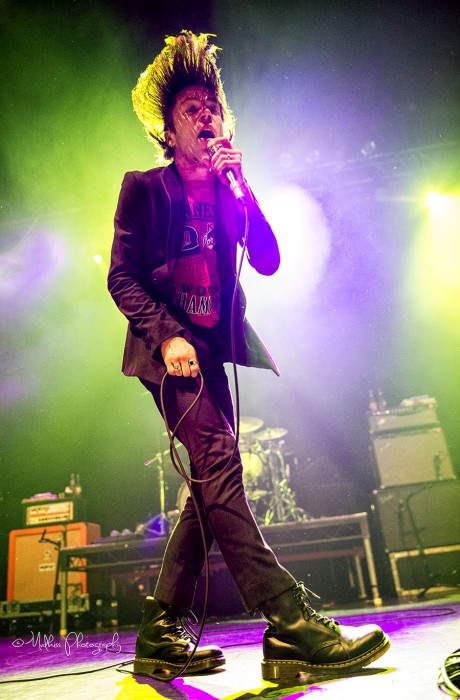 The night’s first taste of new material arrives with set and album opener ‘Cry Baby’. Samuel T. Herring of Future Islands fame gets a lot of attention for his dancing, but he’s got a rival in Matt Schultz, whose angular and animated moves are a mesmerising watch. The song’s swampy breakdown is a highlight. Another new track ‘Cold Cold Cold’ is a classic slice of garage rock and is perhaps the most obvious sign of Dan Auerbach’s involvement behind the scenes.

A brief change of tempo in the set comes in the form of ‘Trouble’. The track floats in on a delicate twinkle of a guitar hook and the chorus pulls the crowd into a sing-along. “Spoke a lot of words, don’t know if I spoke the truth” is a lyric that resonates.

There are very few chances to catch a breath tonight. Not only do the songs feel faster live, but also heavier, meatier, chunkier. ‘Ain’t No Rest For The Wicked’ is a tour de force. The hook, (that in contrast, sounds a bit tamer on record) live, sounds like something monstrous that has crawled out of a swamp delta. As the set nears its finale, the room is sweaty and panting. It’s been non-stop, with the lack of small-talk between songs coming as no surprise – the performance speaks for itself. Everyone on stage is enjoying themselves, there’s confidence, with members throwing guitars to techs before launching into the next song. The crowd mirrors the energy, sat atop shoulders, surfing waves of mosh. By the time final song ‘Closer’ chimes in, Matt Schultz is topless, writhing around on-stage. 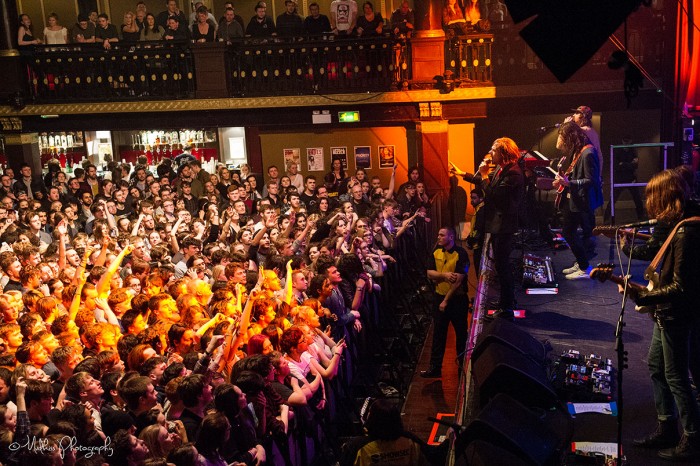 What happens next is special. After much applause and a crowd baying for more, the band return for a meaty encore of ‘Shake Me Down’ and ‘Sabertooth Tiger’. It’s a loud and boisterous finale that proves too much for a select few. Perhaps it was the non-stop intensity, perhaps it was a lethal cocktail of booze, heat and exercise, but either way, like dropping flies, the odd person flees the crowd to spew. Some managing to make it to the safety of a plastic cup, others puking into their hands as they sprint for the toilets. It’s a wild end to the night, a rare and oddly synchronized phenomenon that should be read as nothing less than the ultimate compliment.

Cage The Elephant are sick live, in the best sense of the word.