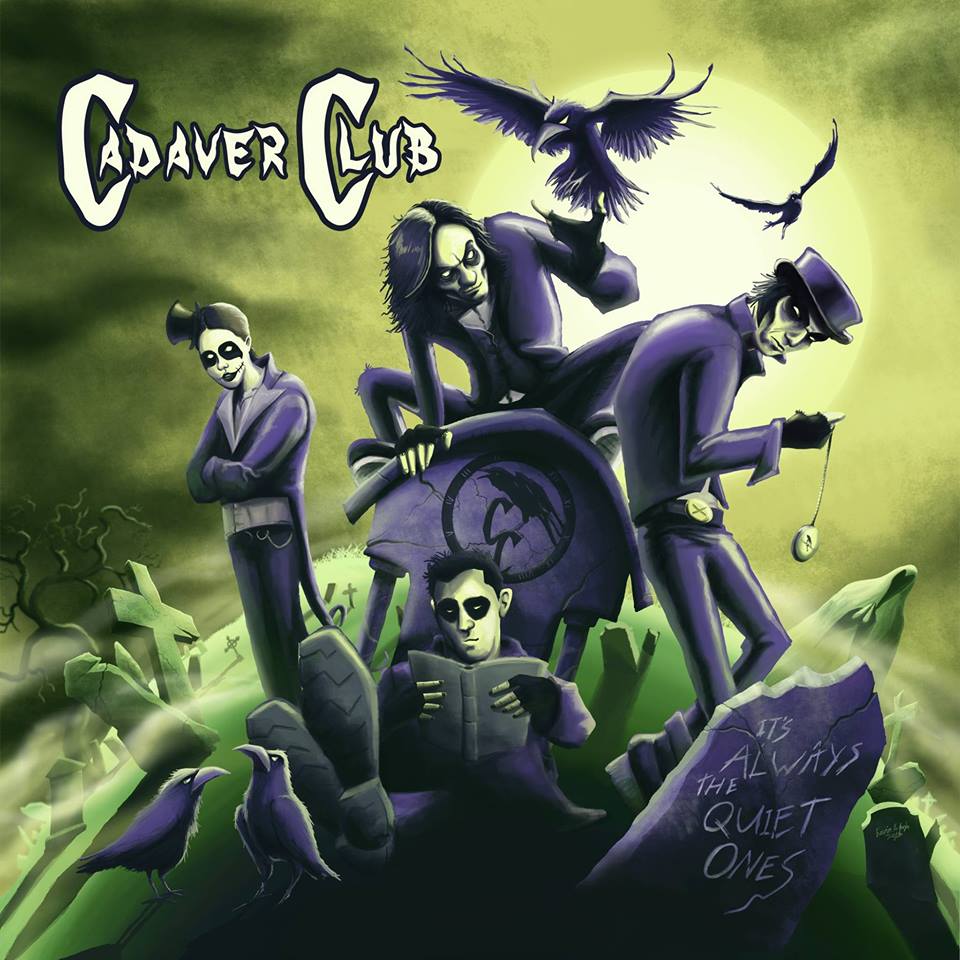 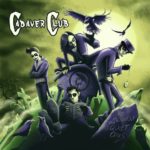 ‘It’s always The Quiet Ones’

N. Ireland’s horror-punk rockers Cadaver Club have offered up their exceptional second studio album ‘It’s always The Quiet Ones’ due to be released on Pirate Heart Records on the 28th of October.

I took great pleasure in delving into their thirteen track album noticing in fine detail just how much thought and effort has gone into this striking piece of sonic art. If ever there was a band more on the ball with D.I.Y ethos it is Cadaver Club as they have every possible angle covered regarding the compiling, promoting and releasing of their creative works.

Lead protagonist Kevin McHugh A.K.A Mr Crowe provides the striking art work as drummer Matty James A.K.A Draggle owns his own independent record label Pirate Heart which releases all their works, along with a whole plethora of Matty’s solo works, Matty also helped produce the album, along side recording engineer John Moffatt.

I really love the theatrical aspect of their look, drawing a strong narrative with their Gothic-esque attire, an interesting way to craft their own unique on-stage atmosphere, also when creating music videos as well as allowing a realm of possibility within the ideas that flourish towards their songs narrative. The band are loved everywhere they play and are set to tour their new album with dates lined up in Ireland, Scotland & England, no doubt more dates shall be added as time progresses.

Please head over to the Cadaver Clubs website on the following www.cadaverclub.com to catch their tour dates and the opportunity to pre-order  their new forthcoming album ‘It’s Only The Quiet Ones’. Here is a taster of the second song on the album ‘Penny Dreadful’ which can be found on the Pirate Heart Records Soundcloud link.https://soundcloud.com/pirateheartrecords/penny-dreadful

& now take the time to delve deep into each and every song through my own individual perspective . I hope their music takes you on as much of a enjoyable journey as it does me….

Track one – Afraid Of Me – Presents a direct hit of fired up delicious pop-punk; prominent curvaceous, burly basslines and instantaneous catchiness which oozes a spirit of unified elation with a depth of rock & roll character to submerge yourself in. Lead vocalist Kevin McHugh A.K.A Mr Crowe owns a uniquely distinctive tone to his voice which is hugely uplifting and clear to absorb. The double tracking layers which have been added upon his voice compliments perfectly the chunky sounding basslines which roll energetically all-over this superb short, sharp, animated opening track.

Track Two – Penny Dreadful – Enters booming, as a melodic, catchy guitar and bass riff ditty; there is a remarkable condensed projection of lyrical story telling which goes on within this track, projected in such a vigorous, exuberant manner. The lyrics are very clever with plenty of metaphor which is effortlessly strung together around thriving basslines, crashing high-hats and booming beats, not to mention the wonderfully placed backing vocals which slot themselves in perfectly, enhancing the tracks infectiousness and attach-ability.

Track Three – Transyvania Twist – Careers itself full-pelt onto the floor-plan of your soul as another sharp blast of booming, power-pop-punk infectiousness defines itself around catchy guitar & bass riffs; rumbling drums, crashing high-hats and a tone which is fixed around the spirit of rock & roll, which is especially supported by the style of backing vocals that are embedded amongst the track. I am reminded of certain elements within the instrumentation of ‘Joan Jet And The Black Hearts’, especially in the the way the vocals are laid. There is a skilful play on words within the song, combined with a blazing guitar solo that will have you bouncing through the roof in a frenzy. A remarkably fun, exciting track that blasts its way into the head-space with no compromises.

Track Four – Southern Cemetery – From the outset the tone is adjusted ever so slightly, as the vocals are brought into a more highlighted point of absorption for anthemic purposes, projecting a wild lyrical story, unified backing vocals, burly bass-lines and rock guitar which just command that you should trash your body all-over the joint. Again this track is equally as infectious on every level. Even though the song is about dying; being buried 6ft under; getting away from all the cut throats in the town; and meeting up with the devil, it is a wildly vibrant song, attributing plenty of heart and soul into each and every note that is sung and strummed out. Check out ‘Southern Cemetery’ Official music video on the following the song was released as the albums single about a year ago. https://www.youtube.com/watch?v=FTMebNxozOA

Track Five – The Dead Ringers – Another exceptional little ditty which exudes masses of character which blasts for just under three minutes. I am absolutely swept away by the melodic nature and solid direction in which the track takes. The instrumentation, backing and lead vocals are compact, as it hurtles itself along in a power driven way. A real gem of a track which again has a sharp play on words, healthy use of metaphor and a solid direction that will have the joint heaving and jumping.

Track six – Follow Me To Hell – Takes the clearest shift in tone so far on the album. A more jazzy feel emanates from the drum section as the structure settles itself down into a wider space. The vocals along with backing is projected in a subtle Doo-wop style that captivates and feeds the senses. I really love the clarity on Mr Crowe’s voice; the playful “Hey”! every so often from drummer, Matty James A.K.A Draggle, and the floating backing vocals which draw a strong atmosphere. A playfully sweet, love song which expresses how things went calculatingly wrong.

Track seven – The Coppercombe Witch – Introduces a direct hit of fast paced punk-rock, which, turns itself in as being a personnel favourite of mine, fusing the drums and bassline upon the entrance of the song and carrying itself along with raw infectious guitar and highly infectious vocals combined with backing. I really love the energy that the track exudes, as every aspect of the song slings a tremendous amount of dextrous playing skill and singing passion into force.

Track eight – When Your Friends Just Won’t Stay Dead – A truly rocking tune that owns plenty of rhythm in its instrumentation. I am beginning to observe through all the playfully dark lyrics there is a strong underlying strain of clarity within the story telling; there is most certainly something more than the roughish, quirkiness to extract from the stories which are being projected across, as you listen through your headphones, sat within your own time and space. Thoughtful meaning is most certainly embedded within the raucous, boisterous nature of the Cadaver Club’s music. This band most certainly cuts it both ways, from a live to a studio perspective, and that is why I find their sound so clever and enjoyable. I feel they managed to encapsulate allot of that live energy within this studio recording.

Track nine – Murder Of Crows – I really admire the dynamic bass riffs which Jolene McHugh A.K.A, Boom Chic-Chic demonstrates throughout the whole of this album. The lady sets the tone with her great knack of producing infectiously vigorous bass-lines. The song holds a strong atmosphere as it settles into a harmonious poetic story of devious murder plans, projected in an upbeat way. After homing in I feel this song literally owns everything that you could possibly love and want from a song. The dynamic bass, the thriving beats, the dark poetic content & atmosphere, the spirit.

Track ten – The Quiet Ones – Leads us into the setting for the albums overall tone which is a power-driven pop-punk explosion with blazing rock guitar and infectious sing along vocals and backing, which are sure to have a crowd smashing along in unison. Yet another dynamic track that holds poetic justice. A track where I can sit and take meaning from through listening attentively. I really love the chugging guitar riffs and Mr Crowe’s depth of conviction as he projects the lyrics.

Track eleven – Twilight Of The Gods – Another track that sits on this album which is easily anthemic in its nature. I really love the blazing guitar, flamboyant drums, thunderous bass and layered vocals on Mr Crowe’s voice which occur on different occasions throughout this awesome track. There exists a space between each member of the band that allows the listener to digest what each individual is doing at different points of the song, weather it be through their instrumentation or their singing. They all seem to take a tiny little stand amongst the song which individualises them and makes each one shine in their musical ability. A song which makes you feel that the whole world could join in at any given moment.

Track twelve – Hellhounds On Your Trail – Hits directly on target and just because its the second last track doesn’t signify any let up on the acceleration, as fast paced instrumentation and vocals hurtle themselves at you in an infectious swirl. This track holds all the hallmarks of the melodic punk rock song, phat curvaceous bass-lines, a swirl of sharp thriving beats and a mass of infectious lyrics to latch onto. Another fun, exciting track that won’t ever let you down, each and every time you tune into it.

Track thirteen – See You On The 31st – Settles down into an atmospheric vocal solo by Mr Crowe, casting a perfect lyrical flow which feels dramatically captivating, then breaks into a highly atmospheric melodic song that owns softer instrumentation’s and presents itself as a more sensitive piece, a perfect way to bow out of this high energy album. There is a beautiful delicate guitar part placed in the middle of this song from Phil Cassidy A.K.A Dirge that I absolutely love, also a humming vocal from the band members which lead into the end of the song which is haunting and draws an undeniable atmosphere. A great way to end the album as the resonance of what went before lingers.

In its entirety ‘It’s Always The Quiet Ones’ presents an exceptional edge in being consistently infectious power-driven punk rock. The lyrical projection holds a poetic burning flame to the darker side which is perfect to escape into, drawing plenty of character and atmosphere to the exceptionally expressed, compact story lines which are sonically painted. There also exists a depth of meaning embedded amongst the songs which feeds emotional attachment, their funeral, Gothic-esque look most certainly crafts a unique theatrical ambience to their live show performances as these characters are brought to life in an animated way through Mr Crowe’s exceptional fine ability to draw. Creating one of the coolest D.I.Y album covers I have seen in a very long time. All this wrapped perfectly around a vibrant energy of dynamic basslines, flamboyantly spirited drumming and chiefly executed electric guitar that drives the edge and energy in and around the other instruments communications. An over-all high octane band who present their absolute best in creating an escapist, feel good creative expression.