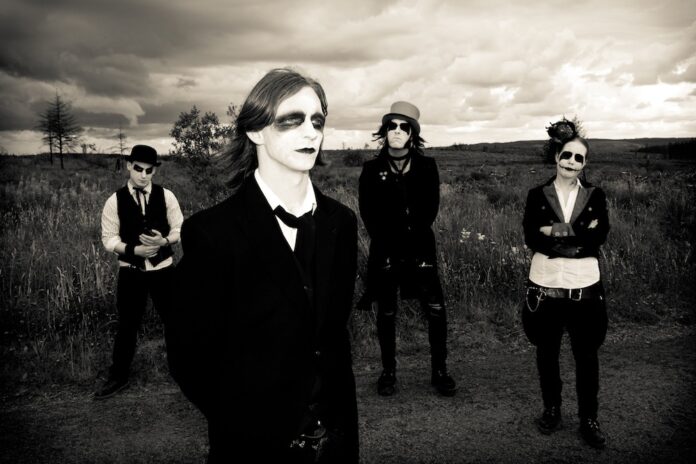 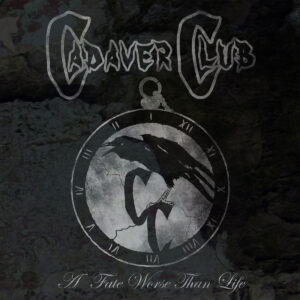 “The goal of being alive is to figure out what it means to be alive, and there is a myriad of ways to deduce that answer; I just happen to prefer examining the question through the context of Pamela Anderson and The Real World and Frosted Flakes.” So said Chuck Klosterman at the beginning of Sex, Drugs, and Cocoa Puffs, like Klosterman, horror punk’s Cadaver Club muse on what it is to be alive in an unconventional way, by singing about death and the things that go bump in the night. If you’re a werewolf singing about love and heartbreak, it’s still about love after all.

Formed by a group of friends who long toyed with the idea of forming a band. Kevin McHugh the lead vocalist in Fermanagh punk rock stalwarts Setting off Sirens, Matty James, troubadour and sometime Filthy Angel, real life brother and the other half of Filthy Angel’s Phil Cassidy, and lastly bassist Jolene Phair. They came up with the aliases, Mr. Crowe, the Filth brothers Dirge and Draggle, Boom Chic Chic, and called themselves Cadaver Club. A successful Pledge music campaign helped finance the release of an album and the end result is a magnificent pop punk début that sounds like they’ve been playing together for as long as they purport to have existed.

The album buoyantly begins with I’m Making a Monster Baby which is surely the funniest song about killing your other half in order to rebuild her with better parts borrowed from her friend’s “who’ve stopped calling round”. It formulated in the head of lead singer Mr. Crowe as he painted a portrait of the Misfits Jerry Only (Mr. Crowe works as an artist, and designed the fantastic artwork for the band). Lyrics started to flow and a possible direction for the until then hypothetical band was born. Familiarity with the worlds they chose to artistically draw from conjures fantastic imagery that’s known yet distinct to them,“don’t open the door to basement, don’t want you to see the replacement…I’m making a monster a baby”. 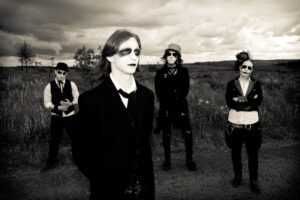 The puntastic Do you Dig Graves starts with an adrenaline fuelled percussive pound that persists throughout. It’s accompanied by some great bluesy guitar riffage from the aptly named brother’s filth. Mr Crowe is assisted vocally by the rest of the band and it’s got a great sing along feel. Current and previous single, ‘Dead Air’, and ‘Lunatic in Love’ are completely infectious too. The music of the fifties is often evoked, not surprisingly The Cadaver Club has a soft spot for the B-movies of that era. The opening bars of Lunatic in Love recall the Skyliners, before it erupts into a love story about the aforementioned werewolf. We might not know what it is to change into a creature of the night, but most know a thing or two about “howling at the moon” in anguish, a werewolf’s plight is an especially empathetic one. Rock n’ Roll is manifest on Bat Among the Pigeons, a rip roaring, toe tapping nod to Jerry Lee and Little Richard. Meatloaf and Jim Steinman attempted something similar a few years back, but Bat out of Hell this is not. Where Dreams Go to Die is about how life is a serious of deaths, it may sound depressing but it’s not, it’s cathartic and encouraging when strengthened by the upbeat nature of the delivery – just don’t let it play out like that.

Of all the protagonists sang about on A Fate Worse Than Life the defiant punk in No End To Me is a sure favourite. He’s not going to play ball with death, he’s far too much he wants to get to, “they’re not gonna get me in the ground”. The album is littered with insanely catchy numbers like this that will be bouncing round your head with immediacy.

The album is released on their own Pirate Heart Records which indicates romanticism for those rogues of the sea, and is apparent in Sally’s Curse, an authentic sea shanty with a heavy rock n’ roll edge. It’s influenced by traditional arrangements and rattles along with quality of something from Rum, Sodomy and the Lash albeit with an element of trashiness by way of Johnny Thunders. It tells the story of a young man who kills his fiancé before their wedding night, and runs away to sea, only to be haunted by his ex love when he does. Definitely a sing along one for when you book Cadaver Club for a loved ones wake.

‘My Rictus Smile’ chugs like a Ramones number with a Wildhearts chorus, and several more lyrics that put the punk in horror punk, “I never let a thing like death prevent me from living my own life.” Often in order for something to be hated, it must first be loved; after all that love is what gives the hatred its roots. There are few post adolescents who won’t recall the pain of an unattainable crush that later becomes a source of hate, we just all wouldn’t like to take an axe to their head, or would we? My First Hate is one for a certain type of romantic. Vampires Ain’t What They Used To Be will have you screaming the lyrics at Robert Pattinson adoring teenagers. It pines for a time when vampires were more than the sparkle skinned ones of teenage romance novels. They used to be scary, “now they’re just teenagers with big teeth”, with more great lines such as “they don’t sparkle, just ask Vincent Price”, and “Bela Lugosi must be spinning in his coffin”, the band’s ability to write a humorous memorable lyric is on a par with their spirited and addictive tunes.

The album draws to a close with a nod to Stephen King’s vampire story Salem’s Lot, that floating kid scratching on the window is still the source of many adult nightmares, but the retelling of the tale doesn’t strike the same fear through the filter of Cadaver Club, stylistically it’s probably closest to what people think of when they think of Horror Punk and finally ‘The Warnings’ another number reminiscent of the Ramones and inspired by traditional Irish ghost tales. The longest track on the album, the band go out with a bang, the album ending as it began with a full on onslaught, coming to a close with noisy guitars and some otherworldly cries.

The real achievement of this album is the overriding sense of fun. It’s underground music that could quite easily work on a large scale. It’s not difficult to visualise theatrics, smoke machines and face painted crowds to match their favourite club member. Sometimes that can be used to detract from the fact that there’s nothing happening with the music. It couldn’t be further from the truth here. The majesty of Mr. Crowe’s voice is a huge factor here, someone who could quite easily be pitted against the Rose’s and Patton’s of the world albeit with a punkier delivery than those two frontmen. Musically too, time has been spent to ensure that there are no half measures and there’s not a dislikeable track on the album.

It probably shouldn’t come as a surprise considering the genesis of the band, but after being together for over a year its incredible how fully formed they’ve arrived. It’s unreasonably virulent punk pop with a health dollop of Rock N’ Roll. The horror punk spawns of Alice Cooper and the New York Dolls, with a look that recalls something from the hand of James O’ Barr.

On this triumphant collection Cadaver Club have weaved their own mythology by infusing colloquial horror stories with universally traditional ones, wrapped it up in the language of B-Movies and comics and delivers it in a wholly unique way running through a barrage of musical styles ranging from fifties pop and Rock n’ Roll to straight up Punk Rock and contemporary pop. It’s musically sharp, uplifting and always fun. Released to coincide with Halloween, it’s not seasonal; this is for the entire year.

Cadaver Club can be found on Facebook and Twitter. You can buy A Fate Worse Than Life at the group’s Bandcamp.

All words by Ray Burke.  More of Ray’s writing on Louder Than War can be found here. Ray’s radio show is Left of the Dial, hear old shows here. Follow him on twitter as @leftofthedialr