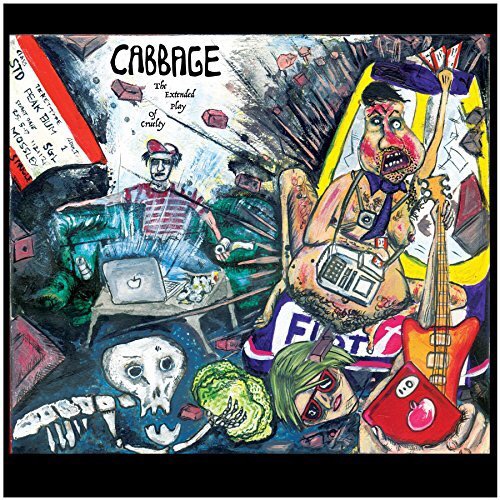 Still in the midst of a massive tour and post their excellent homecoming Ritz gig in July (where they aired a couple of tunes from this EP) Cabbage release their new EP to keep us guessing what their debut album will actually sound like when it hits the streets.

One of the great things about the band is their diversity and I must admit I am clueless to their direction after hearing this which sounds miles away from the brilliant Gibraltar Ape single.

Fraudulent Artist has a pop at shit fake bands and sounds like John Lydon’s doppelganger has been roped in on vocal duties to create a post punk stormer.

A Network Betrayal is going to be a future live anthem after I witnessed the crowd going bonkers to this at the Ritz gig. Joe Martin has a spoken word rant about train conductors and apparently uses quotes he’s actually heard at train stations in the North.  All this over a smart chugging bass line and clever chord changes before the addictive chorus.

Ertrinken sounds like they’ve gatecrashed a Beta Band soundcheck with members of Can and sounds quite strange and displaced from the rest of the EP.

They like to throw a curveball now and again! Asa Morley is a punk ode to their drummer of the same name and doesn’t disappoint with it’s wonk punk madness to bring this new collection of gems to a crashing end. It’s anyone’s guess what the album is gonna sound like.